Menu
A Baker Who Serves 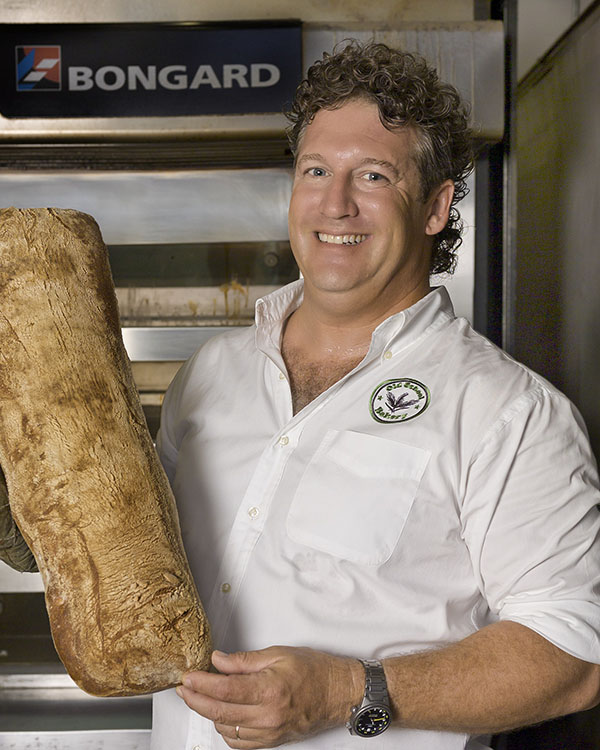 From rosemary focaccia and pistachio olive baguettes to Asiago sourdough crisps and sundried tomato and cheese rolls, the Old School Bakery in Delray Beach, Florida, is known for fresh bread with a delicious combination of taste and texture. Since 1999, owner Billy Himmelrich ’82 has been running the bakery and providing bread to the top restaurants, hotels, and country clubs in Southeast Florida, including Palm Beach, Broward, and Dade counties.

Despite his passion and success, Himmelrich says he ended up in the bakery business by accident. It started with learning French at Taft. “After my mid year, I went to France and did an exchange program with the U.S. Trust for Historic Preservation and worked in the countryside.” He returned to France to study for his junior year of college. Taking advantage of a great exchange rate, he spent some of that time being wined and dined by family friends. “Within a year, I had eaten at half of these Michelin 3-star restaurants,” says Himmelrich. “I fell in love with French food, and when I went back to Emory, I taught myself how to cook with Wolfgang Puck’s Modern French Cooking for the American Kitchen.”

After college he worked at J.P.Morgan, but had a change of heart when the stock market crashed. “I told my parents I wanted to go to graduate school. They said, ‘That’s great! What do you want to do?’ I said, ‘I want to go to cooking school in France.’” Himmelrich enrolled in the second class ever held at the professional cooking school at the Ritz Hotel in Paris.

The following years included several jobs learning from famous French chefs before he moved to Washington, D.C., and got a job making the bread and pasta at I Ricchi, a Tuscan restaurant. After a few other successful restaurant jobs, he opened his own bakery in Baltimore.

In the late ’90s, Himmelrich, his wife, Shelly, and their children, Max and Charlie ’17, relocated to Delray Beach to be closer to Shelly’s family. Right away, he bought a local bakery (the original Old School Bakery) and set out to get customers. “I would bake through the night and drop samples off,” he says. “I got the Breakers Hotel as a customer. Once I got the Breakers, I found it easy to get other hotels and restaurants on ‘The Island,’ similarly in Delray. We grew organically that way, and we grew by 50 percent every year for the first six or seven years.” Today, the bakery has evolved into mainly wholesale with a small storefront.

As the bakery grew, so did Himmelrich’s involvement in the community. He expanded his philanthropic endeavors and convinced the Palm Beach County Food Bank to take his unsold bread. More recently, he and his wife chaired Delray’s first Empty Bowls event—a grassroots effort to raise money for hunger relief. With the purchase of a $25 ticket, attendees receive a meal of soup, bread, and a handcrafted bowl to take home.

For the Delray Empty Bowls event, the Himmelriches partnered with the Center for the Arts and rented the public park from the city. They adopted the Empty Bowls slogan, “Eat simply so others can simply eat” and organized a strong volunteer base by involving the local high schools, churches, and businesses. “What was really cool is that our servers were ‘celebrity servers,’” says Himmelrich. “We got the president of the local university, Florida Atlantic University, the city commissioners, and the local newscaster. We had an NBA star, past mayors, and the current mayor. In addition to the artisan bowls we gave away to everyone, the student pottery that we sold was from the local schools who had made Palm Beach County Food Bank their community service project, and had volunteered to work at the event as well.”

As for what he likes most about his job, he says, “I love feeding people. Not to be served, but to serve…I chose to be a baker over a chef because by baking for more than 250 restaurants, I get to participate in the lives of all 250 places.” But the truth is, Himmelrich has benefited the lives of many more.