WE’RE ALL GUILTY OF IT: prisoners of our email, updating our Facebook status from the comfort of those Egyptian cotton sheets, and stealing that one last glance at Instagram before our head hits the pillow.

But this new age of enlightenment isn’t all that it’s cracked up to be, in the words of sleep expert Emerson Wickwire ’91, who has been studying the effects of what is known as “blue light” emitted from electronic devices on the body’s natural circadian rhythms. 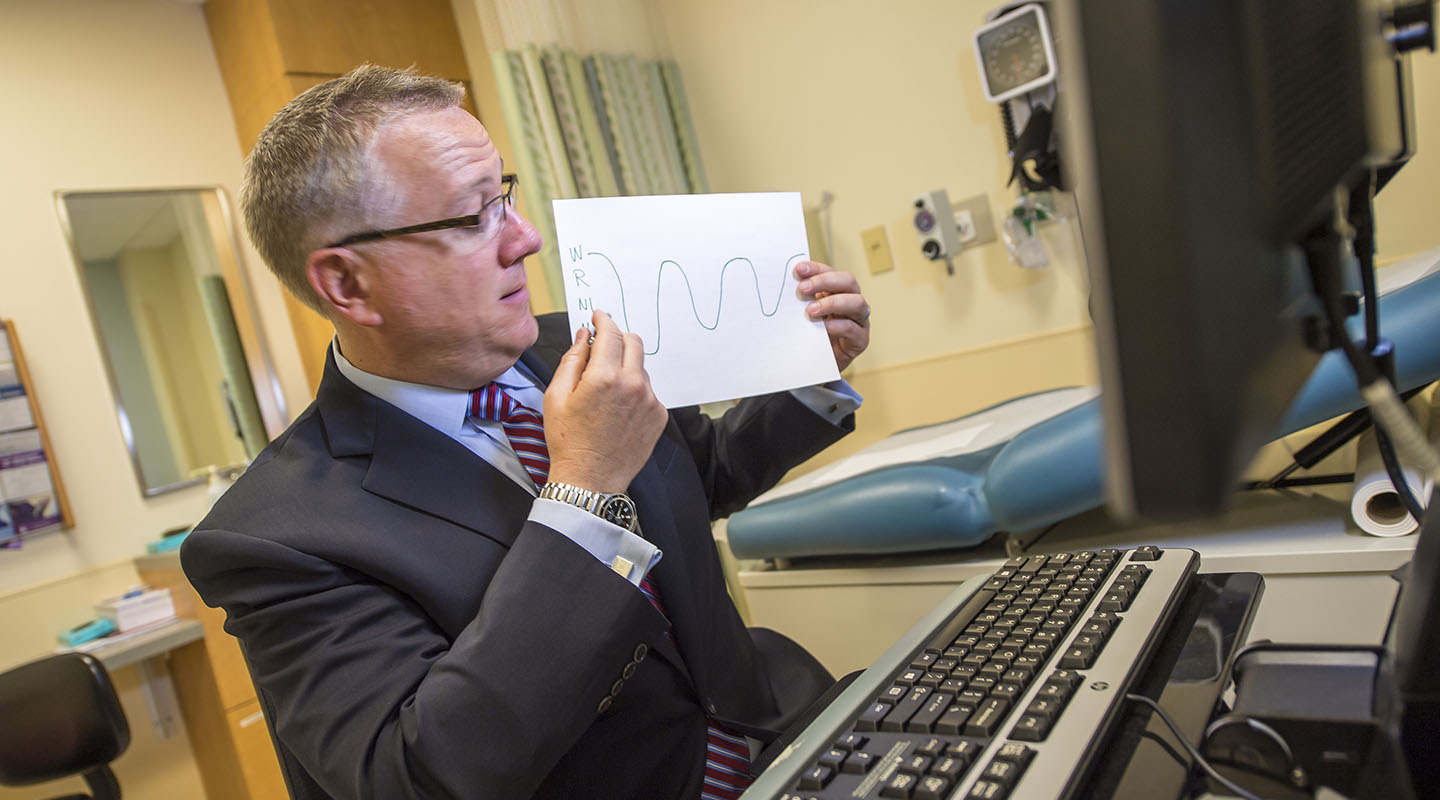 Because of its short wavelength and high intensity, blue light suppresses the release of the sleep hormone melatonin.

“We need more dusk in our lives,” Wickwire says. “Artificial light has changed the evening routine so that the day has been prolonged.”

So you should probably put down your smartphone and follow the advice of this modern-day Mr. Sandman, who resides in Baltimore with his wife, Danita, and the couple’s 3½-year-old son. Wickwire is the director of the Insomnia Program at the University of Maryland School of Medicine, where the U.S. Army sends its sleep medicine fellows from Walter Reed National Military Medical Center to study under his tutelage. Wickwire has been working with the military to enhance non-drug treatments for sleep disorders, which active service members and veterans are particularly susceptible to, especially those suffering from post-traumatic stress disorder or traumatic brain injuries.

It was Ben Franklin who popularized the adage, “Early to bed, early to rise, makes a man healthy, wealthy and wise.” Well, Wickwire can quantify the value of a good night’s sleep—or, rather, the cost of a restless one.

The optimum is seven to nine hours for a healthy adult. Get less than five hours of sleep, and your risk of getting into a motor vehicle accident doubles, according to Wickwire. A person who has been awake for 24 hours has the neurocognitive impairment of a person with a .10 blood alcohol content, above the legal limit in drunk driving cases.

“You should know how much sleep your driver, pilot, or surgeon has had,” Wickwire says.

So how did a former Academic All-American wrestler for Boston College and private school wrestling coach become an innovator in the science of sleep? Wickwire was pursuing a Ph.D. in sports psychology when he had an epiphany. When looking at productivity and performance, he says, sleep was the missing variable.

“The majority of costs of untreated sleep disorders are actually borne by employers,” Wickwire says. “Employees who aren’t sleeping well are less productive.”

Wickwire completed a fellowship in behavioral sleep medicine at the prestigious Johns Hopkins University School of Medicine, where he also served as an assistant professor. From 2009 to 2014, he was sleep medicine program director for the Howard County Center for Lung and Sleep Medicine in Maryland. Wickwire is on the editorial advisory board of Sleep Review and is associate editor of the Journal of Clinical Sleep Medicine.

“I’m the most popular guy at the cocktail party,” Wickwire says. “No matter where you go people are curious about sleep.”

The snooze button—the global addiction of squeezing in a few more precious z’s—is the bane of Wickwire’s existence.

“If you need to snooze, it means you haven’t gotten enough sleep to begin with,” he says.