Menu
From On the Ice to On Air

Two years after retiring from hockey in 2003, AJ Mleczko (Griswold) ’93 could not recall being as nervous and intimidated as when she walked into a tiny studio in Stamford, Connecticut, for an audition with NBC. Seated across from her, behind a microphone, was Mike “Doc” Emrick, the legendary play-by-play man whose distinctive voice and florid language have become a favorite soundtrack for the NHL playoffs. 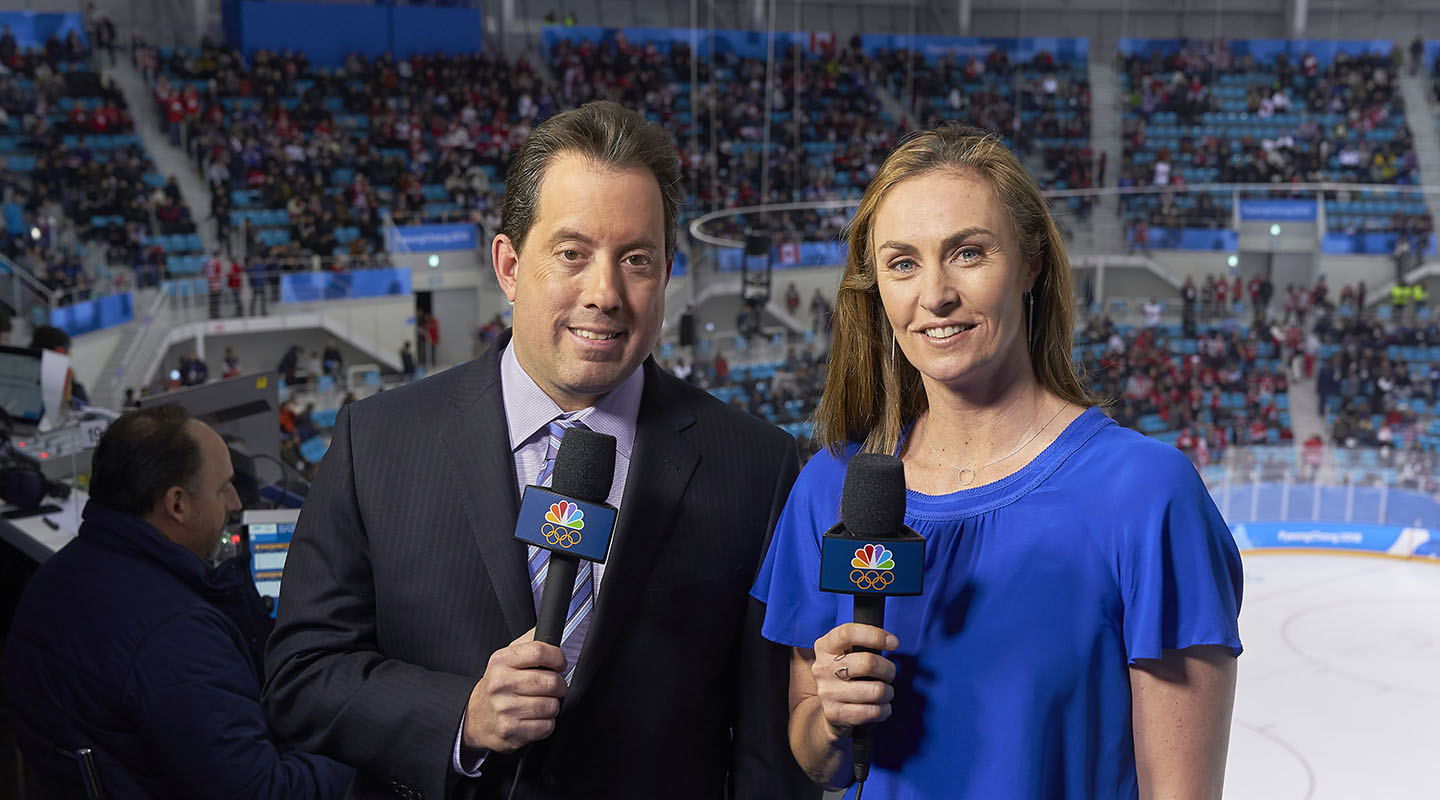 Then NBC threw Mleczko a curveball: the game she was asked to analyze in her audition was none other than the 2002 Olympic gold medal matchup between Canada and Mleczko’s Team USA—a game the United States lost, in a heartbreak, 3–2. Mleczko had not watched it since playing in it.

“That really threw me,” she says. After the audition, “I left there thanking them for the opportunity and thought that was a good experience, but the ship with NBC had sailed.”

Not exactly. A few weeks later, NBC called back. They wanted her in Turin, calling games for the 2006 Winter Olympics, and Mleczko’s post-playing career was officially born.

While the mother of four says she still considers herself a “full-time mom,” in May she became the first female broadcaster to call an NHL playoff game from the booth, during the second-round series between the Nashville Predators and the Winnipeg Jets. The milestone capped an already momentous season: A few months earlier, Mleczko had been in South Korea calling the U.S. women’s hockey team’s victory over Canada in the gold medal game of the 2018 Olympics in PyeongChang.

Mleczko’s evolution from a star on the ice to a barrier-breaking voice off it has surprised her more than anyone else. “I didn’t go to school for communications or any sort of broadcasting,” says Mleczko, who played at Harvard. But she has found that she enjoys staying connected to the game through her experiences talking about it and analyzing it. “I really enjoy looking at the game analytically,” she says. “I like the challenge of seeing the game that I know so well and trying to put words to what I’m seeing in a way that other people will understand it.”

This winter, her fifth time covering the Olympics—including the 2016 Summer Games in Rio, where she called field hockey—was a highlight because it marked 20 years since she won a gold medal as a member of the 1998 U.S. women’s hockey team.

“The fact that the women won and redeemed the heartbreak from four years ago in Sochi was much more emotional than I expected it to be for me,” Mleczko says. “My husband brought our kids over, and it was really special for me to have them there witnessing it live, knowing that I had won the same medal 20 years ago. They know I did it, but seeing it and seeing how special it was, they were really into it. That was especially touching for me.”

While she was in PyeongChang, NBC asked her to call an NHL regular season game when she returned. That led to another assignment, then several more, until the Stanley Cup playoffs arrived. Her phone kept ringing.

“I was in the airport flying home from Nashville and I got the call saying, ‘We want you to stay on for the rest of the series, can you fly to Winnipeg?’” Mleczko recalls. “I said, ‘I don’t have my passport!’ So I had to fly to Boston, get my passport.”

She hopes to keep calling nationally televised games for NBC during the regular season next year, when the schedule is hopefully a little more predictable. As for people calling her a “pioneer” in broadcasting, she gives credit to other female broadcasters who are in similar roles for other networks, such as ABC’s Doris Burke and ESPN’s Jessica Mendoza. Mleczko says her job is made easier by the fact that her colleagues at NBC have never treated her any differently.

“There’s no extra attention given to the fact that I’m a woman in the booth,” Mleczko says. “Which is exactly the way I want it. It’s the way it should be.”