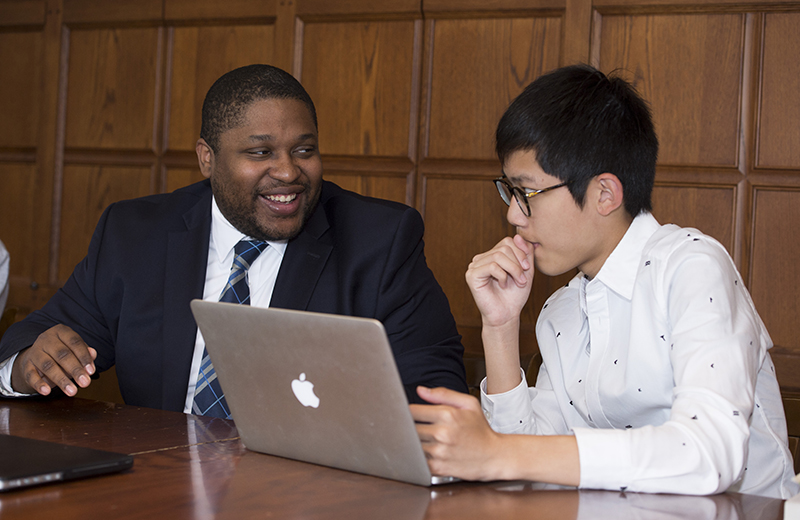 One week after graduating from Middlebury College, Khalid Tellis was on a plane bound for the Mississippi Delta. He would spend two years there, teaching in a city where access and resources are limited: the per capita income is $13,992, and 30% of the population lives below the poverty line. It was there that his teaching philosophy began to take shape, and where he discovered lifelong educator Rita Pierson.

“In my first year of teaching I listened to a TED talk by Rita Pierson titled ‘Every Kid Needs a Champion.’ In it she says kids don’t learn from people they don’t like,” says Tellis. “Students will work hard when they know that you care about them—when there is mutual respect and caring in the classroom. What I came to understand in Mississippi was that treating these kids like people was the most important thing I could do to help them learn. If I touched their hearts, I could reach their minds. When I think about pro-social and -emotional learning, that’s it.”

Tellis is now in his fifth year as a high school English teacher. His experiences in the classroom—both as a teacher and as a Master’s candidate at Johns Hopkins University—have strengthened his belief that learning begins with respect and caring. He finds inspiration in a book called Teaching with Love and Logic, and thinks about writing a book of his own, Joy and Humor in the Classroom.

“Research has shown that heart and joy and humor are beneficial,” Tellis explains. “There is both anecdotal and quantitative data that shows that it helps students retain information, and allows them to take responsible risks as learners. Without it, students may put up walls. If you have a wall up, you might learn, but you might not trust me, or know that you’ll be supported even when you make mistakes.”

And all of that—all that Tellis brings to the classroom and community—embodies one of Taft’s tacit tenets: build a rigorous curriculum, deliver it with heart.

“The challenge is to do that well,” says Tellis, “to find that balance.”

It seems he has: Tellis is teaching senior electives this year, including a course in prep school literature which, he says, students were clamoring to get into. The class was overenrolled, and not just because bits of Harry Potter are included on the reading list, but because Tellis’s approach resonates with his students—both the heart and the rigor.

“My time at Oxford certainly influences my approach in the classroom,” says Tellis, who spent a semester at Oxford’s Keble College and the Centre for Medieval and Renaissance Studies. “The program employs a tutorial-based system, and by tutorial, I mean courses that are one-on-one with a PhD-level professor, or three-person seminars.”

His classes at Taft feature a good deal of one-on-one work, partner discussions and projects, and small-group break-out sessions.

“I want to collaborate with my students—to make teaching a dialog,” Tellis says. “Sometimes I think, ‘Maybe I should be a little stricter, or maybe I should do x, y, or z.’ But this works—treating kids like people first, collaborating, showing them they are valued. It is when they know they are valued that the learning happens.”