Menu
A Leap of Faith

As an upper mid, Eleanor Streit is starting to think about life after Taft. One possibility: studying psycholinguistics, a broad field that encompasses things like language acquisition, syntax and semantics, phonology, and morphology.

In some ways, the science of language has already shaped Eleanor’s passions: she is a member of Taft’s Improv group, where her talent as an impressionist and performer bring light and energy to the stage. It is something, Eleanor says, that has always been a part of who she is.

“I’ve always been drawn in by people’s voices,” Eleanor explains. “I started by impersonating the people in my life—by mimicking the qualities that characterized the way they speak. I love noticing differences—the way people combine or emphasize different words, how pacing and speech patterns vary from person to person, and how vocal ranges are so unique—I just love that diversity.”

With only a few required middle school drama classes in her arsenal and no real interest or experience on the stage, Eleanor auditioned for Taft’s highly selective eight-performer Improv troupe as a mid.

“Trying out for Improv was like this leap of faith for me,” says Eleanor. “Being a part of the group ended up really shaping many aspects of my experience as a student at Taft. Looking back at freshman year, I didn’t really take advantage of all the opportunities that were available to me. Improv helped me come out of my shell. It gave me confidence to make mistakes and to learn from them.” 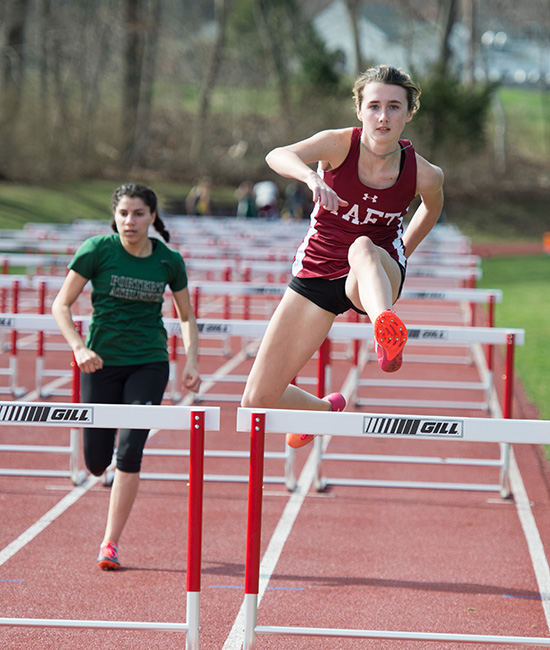 Eleanor brings that confidence into her performances with both Improv and Hydrox, Taft’s female a cappella group, and as a cross-country runner and hurdler. She carries a challenging academic course load and serves the community as a dorm monitor.

“I remember being in the dorm my first day here and unpacking and being really nervous,” Eleanor recalls. “Monitors kept stopping by, saying hi and checking in. From that first day I knew that there would be people here for me and that no matter what struggle I might face, I wouldn’t have to go through it alone. I knew I wanted to be a part of that, too—to be there for the girls in my dorm when they need it most, when that big Physics quiz feels like the end of the world, and when they just had the best news. That’s what I really think being a monitor is about: being there when they’re laughing, and being there when they’re crying.”

And in that sense, a talented monitor can learn a lot form a talented Improv performer.

“It’s really all about working together,” says Eleanor. You may come up with something really witty—something that feels really important to say—but you know that saying it could bring the scene to a stop, so you let that go and work on building the scene toward a goal with the other players. And while you don’t know what they’re going to say next, you trust each other enough to know that if you really listen and really work together, you can build something that will move your story forward toward a really satisfying ending.”