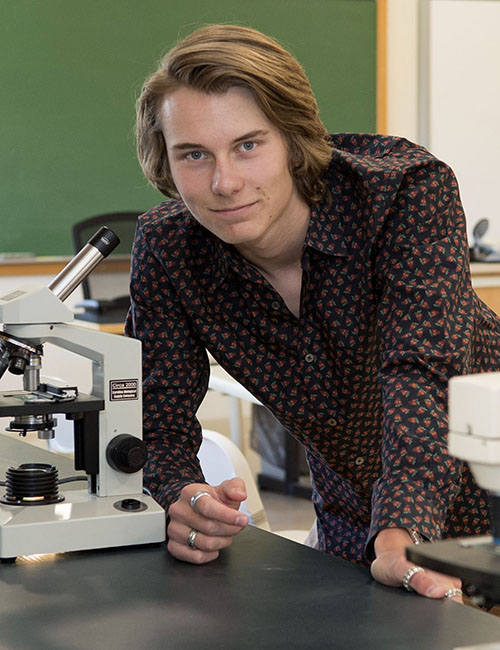 Marcus Valenta ’19 recently began digging into his family history. The stories he has unearthed are fascinating.

“My grandmother’s sister, Adele, recently died,” says Marcus. “When the Russians invaded the Alps, Tante Deli dug a hole in the ground and lined it with hay. She threw all of her books in the hole, covered them with hay and dirt, and then planted a garden over them. She had all of those books in her home when she died. They are written in old German, making them difficult to read, but I’m working my way through them now.”

Perhaps even more interesting, Marcus says, is what he has learned about his grandfather. Franz Valenta was a man of many accomplishments. Among them: the invention of the alloy from which the exterior tiles on the space shuttle are crafted. Franz, it seems, was a metallurgist with a penchant for aluminum. As a young boy living in Austria, Marcus, himself, took an interest in metallurgy—specifically in aluminum—knowing almost nothing about his grandfather or the nature of his work.

“I would say I was 10 when I started melting tiny bits of wheel weights and old tin cans in the fireplace in our home in Austria,” Marcus recalls. “I used hairdryers to make the fire burn hotter; the highest temperature I could reach made aluminum.”

Marcus believes it is possible (but unlikely) that the passion and proficiency he shares with his grandfather are simply coincidence. It is more likely, he says, that the bond is rooted in science.

“The mindset is something deeper—it is almost like the way an enzyme molds to a ligand—my mind just fits around that specific area of science. I believe I must have inherited that from my grandfather.”

It doesn’t come as a complete surprise, then, that Marcus is working on a genetics-based research project as part of Taft’s Independent Study Program (ISP). ISP challenges students to think about learning in new ways, through high-level, inquiry-based, self-directed courses of study. Established in 1964, ISP was the first of its kind in the nation, and continues to offer students a unique opportunity for advanced learning outside the traditional classroom setting. Which is exactly where a good deal of Marcus’s learning has always taken place. Born in California, Marcus has lived in France, Austria, and Switzerland. In each location, he studied in French schools.

“There is a stronger emphasis on the Humanities in the French system than there is on science,” Marcus explains. “Each year we studied English, French literature, German history, German literature, and math. But chemistry and physics were one combined course. There was no lab time, and there were no lab materials. If I truly wanted to do science, I had to do it on my own.”

And he did. Marcus supplemented his classroom study in his home “lab” with his fireplace and hairdryers. He melted metals and turned them into rings—a symbol, he says, of continuity. He explored organic chemistry, inorganic chemistry, and mechanical engineering. He did deep academic dives into experimental and theoretical astrophysics.

“Sometimes instead of doing homework I would just spend hours studying astrophysics,” Marcus says, “and thinking about all of the possibilities the universe holds.”

Marcus’s ISP project also considers a universe filled with possibilities—one in which the application of science and technology can “actualize science fiction” through selectively engineered genetic mutations. In his research, Marcus considers altering human genomes with genetic adaptations from “evolutionarily interesting organisms” using CRISPR-Cas 9, a genome-editing tool that allows scientists to remove, add, or alter sections of the DNA sequence.

“This project is really like fictional enticement,” says Marcus. “I want to increase interest in this kind of engineering, and in the ethical questions it raises.”

In his work, Marcus considers a wide range of potential biological adaptations to the human genome, including the ability of the turritopsis dohrnii—the immortal jellyfish—to revert to a stem cell fetal state, which prevents it from dying of old age, and the tardigrada’s dormancy system which, when coupled with advanced technological advances in hibernation, could extend man’s reach through space travel. Which bodes well for Marcus’s future.

“My end goal has always been to become an astronaut,” Marcus says. “When I was younger, I started a metal collection. Wherever I go in the world I take a magnet because that is the easiest way of getting metal. I pass the magnet through the sand on the beach and get magnetite, or I uncover strongly magnetic rocks that could be meteorites and find a place in the extraterrestrial section of my collection. These are little things that I associate with memories of the places I have been. My goal is to be the first person to set foot on Mars and collect a metal sample there to add to my collection.”

Until then, Marcus is content to continue his studies at Taft.

“The labs here are incredible. To come to Taft and find an entire building dedicated to science was amazing to me; that was unheard of in the French system. The entire program has advanced my capabilities, and nurtured my curiosity in the sciences.”