Spend time with Nicholas Baird ’20 and it quickly becomes clear that he is positivity personified. Ask him anything, and he’ll likely conclude the thoughtfully articulated discourse with, “And it’s just so much fun.” Computer Science classes and writing code? Fun. The many theater roles he has not just fully inhabited but definitively elevated during his time at Taft? So much fun. The I Block social issues course he co-teaches, his passion for mathematics, throwing the discus, leading Step Team and Masque and Dagger, his roles as dorm mon and EcoMon, singing and traveling with Collegium? All just so much fun. It is an attitude that is contagious. 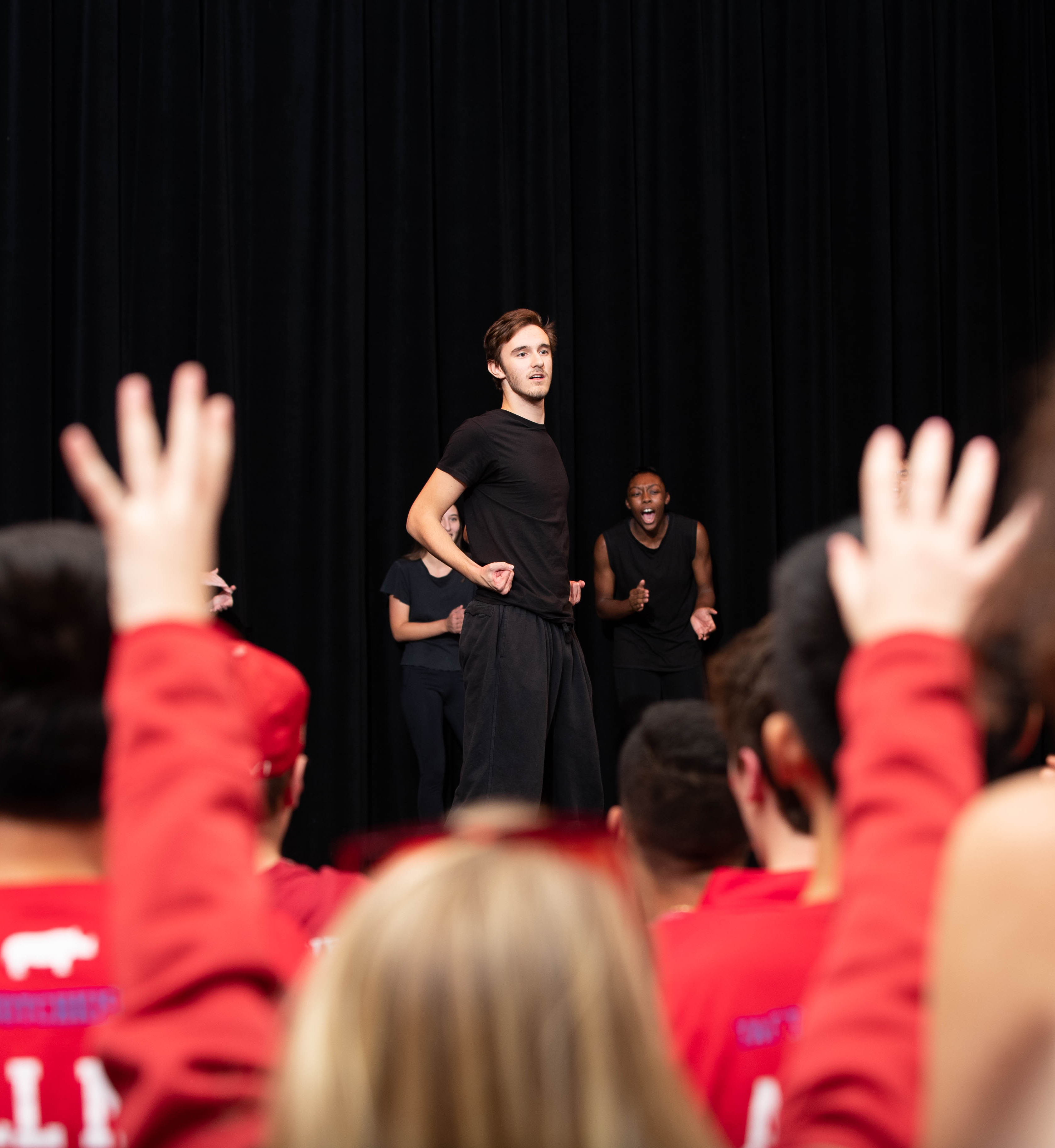 “I try to bring people together,” says Nicholas. “Maybe that’s just my personality type, but the thing that gives me the greatest satisfaction in life is seeing unity in a community. I hope that when people see me keeping my head up they feel good, and they feel encouraged and connected in a place where we’re all dealing with the same things—heavy workloads, a lot of activities, other pressures—and they feel that we can wake up in the morning and say, ‘I’ve got this,’ and just go for it.”

Nicholas’s natural exuberance and penchant for connection make his most recent turn on the Taft stage that much more remarkable. As Christopher Boone, the 15-year-old boy at the heart of a play based on Mark Haddon’s book The Curious Incident of the Dog in the Nighttime, Nick became a character for whom “fun” is a concept that is difficult to define and personal connection even harder to come by. In the book, Christopher describes himself as “a mathematician with some behavioral difficulties.” Early covers of the publication referenced Asperger’s Syndrome, a diagnosis on the autism spectrum. 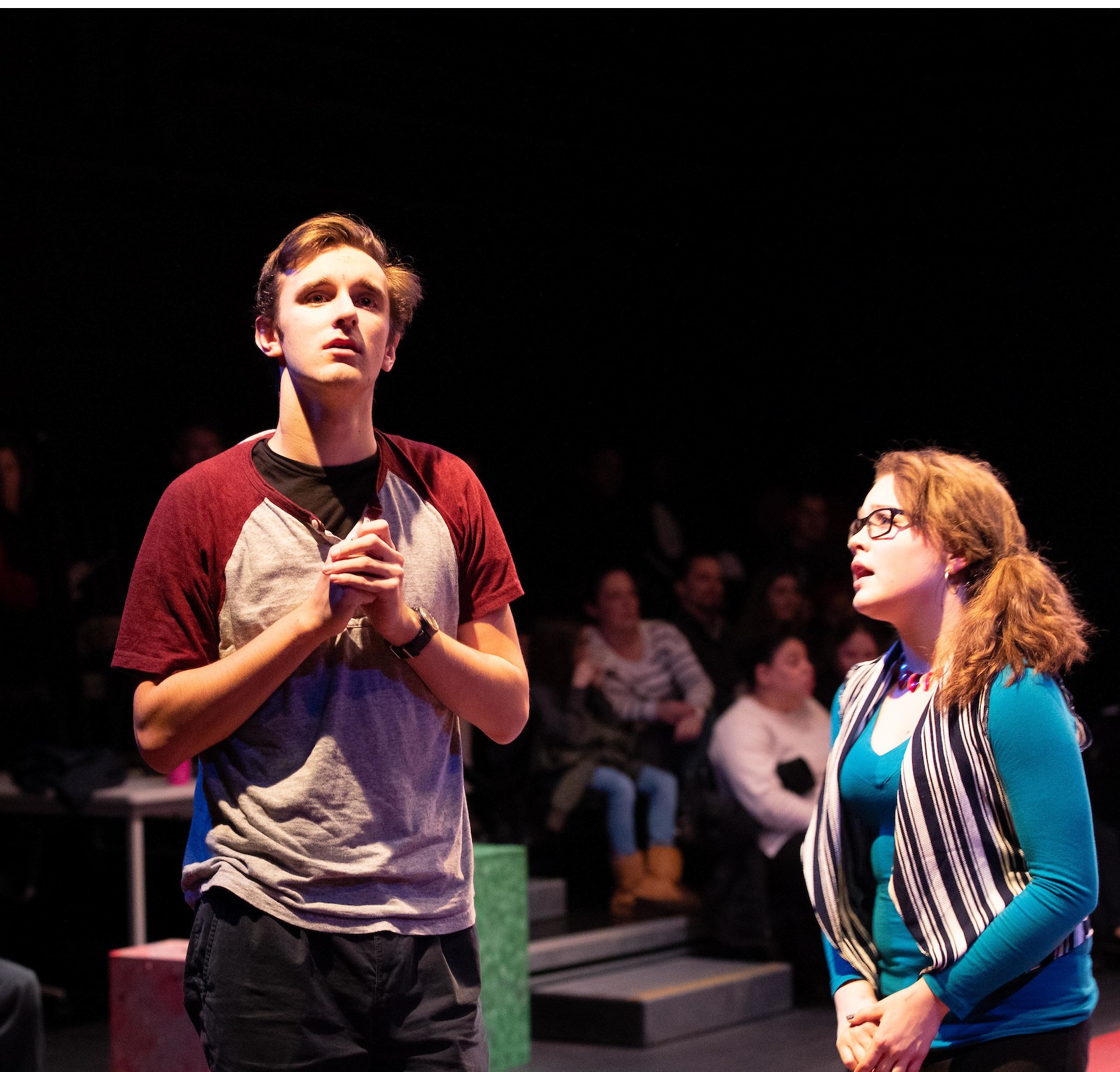 “It’s hard,” says Nicholas whose stage debut came early, when he became the first, first-grader in his school to play the role of the Nutcracker in their annual holiday show. “The character is so different from who I am as a person. It is way out of my comfort zone, and a long way from Shrek, my first show at Taft, where everyone is dancing and happy all the time. This play opens with Christopher discovering that the neighbor’s dog is murdered. It’s wildly different.”

The staging of The Curious Incident of the Dog in the Nighttime was also uniquely demanding: All of the characters are essentially on stage during every moment of the show, whether they are part of the scene or not.

“It is challenging to get into the mindset of how is this person going to react in the scene, and also outside of the scene but on stage,” explains Nicholas. “I needed to bring a consciousness or awareness of Christopher to each moment—what would he be thinking about? What are my facial expressions saying? What is my posture like? And does all of this authentically reflect who Christopher is? It is all different than what I’ve been used to.”

The role also required Nicolas to memorize reams of dialog, including an “afterwards,” of sorts, where he delivered a highly technical accounting of the solution to Christopher’s favorite problem on his “A-Levels” mathematical exams. The key, Nicholas notes, is understanding the character.

“Whenever you do a play or a musical you have to find the balance between knowing every word from rote memory and being able to go on and get past it even if you trip on a couple of words. If you know a character well enough, you know what that character would say in a situation. That’s helped me a lot in this production.”

Perhaps Nicholas’s own love of applied mathematics helped him, as well. Last fall, he completed a post-AP course in computer science at Taft. He also spent last summer managing Microsoft SharePoint, a dynamic intranet, at a pharmaceutical company near his home in Illinois.

“I was working with a system that a lot of people in the department were unfamiliar with,” Nicholas says. “Often I’d bypass the interface and just go straight to the code. It was a lot of fun. It was also challenging to figure out a system that no one there really knew how to use and then plot the points along the route that I took so that I could show everyone else how to get there.”

It is that “show[ing] everyone else how to get there” that makes Nicholas’s impact so extraordinary. In action and by example, he is a natural leader. His involvement in the Taft community runs deep—his obligations and his workload are great—but so is his commitment. And while he makes it all look easy, it can be a challenge—one he approaches with his trademark positivity.

“It is about finding the time when you think you don’t have time,” Nicholas explains. “It has been hard, but I think the greatest reward is knowing that I can do it, and knowing that by keeping my head up, other people will see that and think, ‘I can do it, too.’”