Menu
Summer Journeys: Changing Something in Yourself

Tania Tsunik ’20 began volunteering at a local school in Ukraine when she was 13 years old. She helped elementary school students with homework, and organized extracurricular events and programs.

“I never thought that my community service experience could go beyond my home country,” says Tania. “But then I saw a movie where some of the main characters traveled to another country to teach English and thought, ‘maybe one day…’ Once I came to Taft, I realized that ‘one day’ had arrived.” 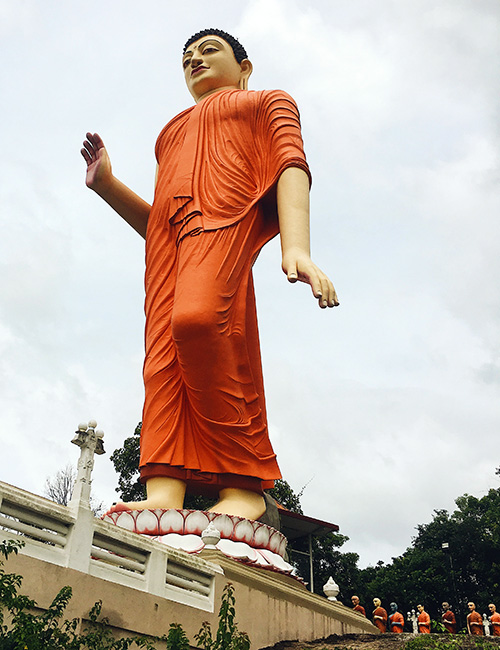 With support from a Poole Grant, Tania traveled to Sri Lanka through International Volunteer HQ (IVHQ), a volunteer travel organization partnering with service agencies in 40 destinations around the world. Since their founding in 2007, IVHQ has placed nearly 100,000 student volunteers in site-based programs “to have a meaningful impact, to foster cultural exchange, and to expand skills and horizons.”

Tania was among the very first IVHQ volunteers to teach English to a group of young monks in a local Buddhist temple.

“My class was about fifteen boys, ranging from the age of nine to thirteen,” Tania says. “The monks had not had language lessons on a regular basis before, so I was teaching them basic grammar rules about sentence structure and questions, and teaching them some words, describing food, animals, professions.”

Between lessons, the young monks would show Tania around their temple, asking her to provide English words for the sights they saw along the way. They also invited her to take photos of their favorite frescoes and statues; she was not, however, allowed to photograph the monks.

Tania spent her afternoons working in an orphanage for girls, some as young as six, none older than eighteen.

“We were both playing with them and teaching them English, but in a more 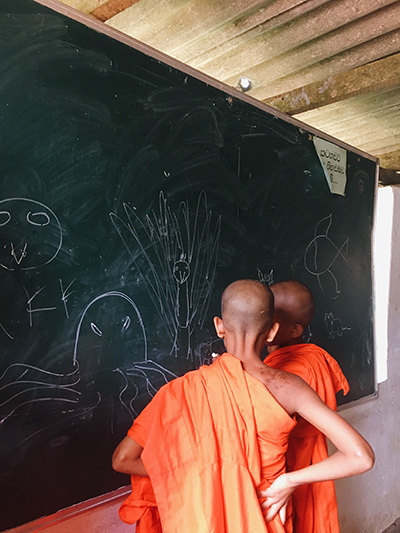 informal way,” Tania explains. “There was no classroom, so we were all sitting outside in a circle, singing some children’s songs in English and talking about the weather, their favorite toys, hobbies, and our dreams for the future. They loved braiding my hair, while humming some Sri Lankan folk melodies. They called me ‘sister’ and always gave a small souvenir before I left—a mango from their garden, a piece of freshly baked bread, or a ribbon bracelet.”

Tania says she was drawn to Sri Lanka by the images she saw of breathtaking views, elephants roaming the streets, Ceylon tea plantations, wild rainforests, and “peaceful beaches with golden sand.”

“I saw all of that,” says Tania, “and it was absolutely beautiful. But I saw the real Sri Lanka in the eyes of a 13-year-old Buddhist monk. His name is Ratanasila, and his eyes are the color of the anthracite coal, just as dark and sparkling. The very first day, at the end of the class, he didn’t want to leave, but didn’t know what or how to say a lot of things, so we were just asking each other our name, age, and favorite color again and again. Then he suddenly asked me what my favorite bus was. I didn’t understand what he meant by that, so I just laughed and nodded. He gestured for me to follow him to the blackboard, where he drew a sketch of a bus, then started naming all the transports he knew in English: tuk-tuk, bicycle, motorcycle, train, minivan, taxi. His favorite was Raji-bus, a long pink bus, covered in graffiti, that passed through the streets with its windows wide open. Every time the Raji-bus passed their temple, the young monks would run to the road and follow it as far as they could, shouting greetings, waving to the passengers, and laughing loudly. Just as they did for me every day when I left the temple. That was the true Sri Lanka and that was the true meaning of community service for me. I understood that volunteering is not about changing the whole world, but about changing something in the world of a small group of people and, with it, changing something in yourself.”

Tania's travel was funded in part by a Robert Keyes Poole '50 Fellowship.Established in memory of Robert Keyes Poole '50, Taft master from 1956 to 1962, Poole Fellowships are awarded each year to enable Taft students to engage in travel or in projects consistent with Mr. Poole's lifetime interest in wildlife and the environment.