Taft’s Global Leadership Institute (GLI) is a competitive and rigorous co-curricular program. Each year, twelve Taft students and twelve students from Greater Waterbury are selected to participate in an 18-month journey designed prepare them to not only increase their understanding of global issues, but to effectively impact change. As a GLI Scholar, Stone Fenton ’20 committed to furthering his understanding of world hunger, and to exploring innovative solutions. His inquiry took him far beyond his GLI studies.

“In the course of my research, I stumbled on a series of articles about potato breeding,” says Stone. “I read a lot of trade articles showcasing a tiny Dutch company, which was developing non-GMO, diploid, homozygous potato plants which could be used to produce reliable seeds with genetically reliable characteristics.”

A concept, Stone explains, that is revolutionary.

“Potato plants are genetically complex; the potato genome has over 30,000 genes. Unfortunately, this wide genetic variability means potato seeds produce unreliable crop results; potato seeds are generally considered useless for planting. To circumvent the genetic unreliability of seeds, genetic cloning is used instead—a portion of last year’s crop is replanted to create new plants. Farmers would love to use potato seeds—it would increase yield, eliminate seed-tuber storage costs, and dramatically reduce the need for systemic pesticide use. While still in its infancy, the Dutch company’s ability to produce genetically reliable seeds has the potential to revolutionize potato farming, bringing enormous benefits to farmers worldwide, particularly those in developing nations.”

Stone amassed reams of potato-seed research. He wrote about the problems with seeds, and the work being done in the Netherlands. But not for his GLI essay, simply for his own edification. And then he had an idea.

“I mustered my courage and sent the paper to every executive listed on the Dutch company’s website,” says Stone.  “A few days later, one of the executives called me.  He was in an airport, had two hours until his flight, and wanted to talk about my paper.  I asked him a lot of questions and at the end of our conversation, he asked me if I would consider a summer internship in the Netherlands.”

And he did. For two weeks, Stone worked in both the breeding laboratory and the potato fields. He assisted in replanting potato cultivars, tended crops, recorded growth cycles and characteristics, collected and weighed tuber harvests, and worked with laboratory breeders. He learned about potato genetics, cropping, and the potential for reduced pesticide use and world food security.

Stone also submitted his original research to the World Food Prize, “the foremost international honor recognizing  the achievements of individuals who have advanced human development by improving the quality, quantity, or availability of food in the world.” Stone was invited to present his research at The World Food Prize New York State Youth Institute, held at the Cornell University College of Agriculture and Life Sciences in June.

“The World Food Prize was founded by one of my heroes, Dr. Norman Borlaug,” Stone explains. “Dr. Borlaug’s work transformed agricultural production, sparking what today is known as the Green Revolution. Because of Dr. Borlaug’s many contributions in preventing hunger, famine, and misery around the world, it is said that Dr. Borlaug has saved more lives than any other person who has ever lived.” 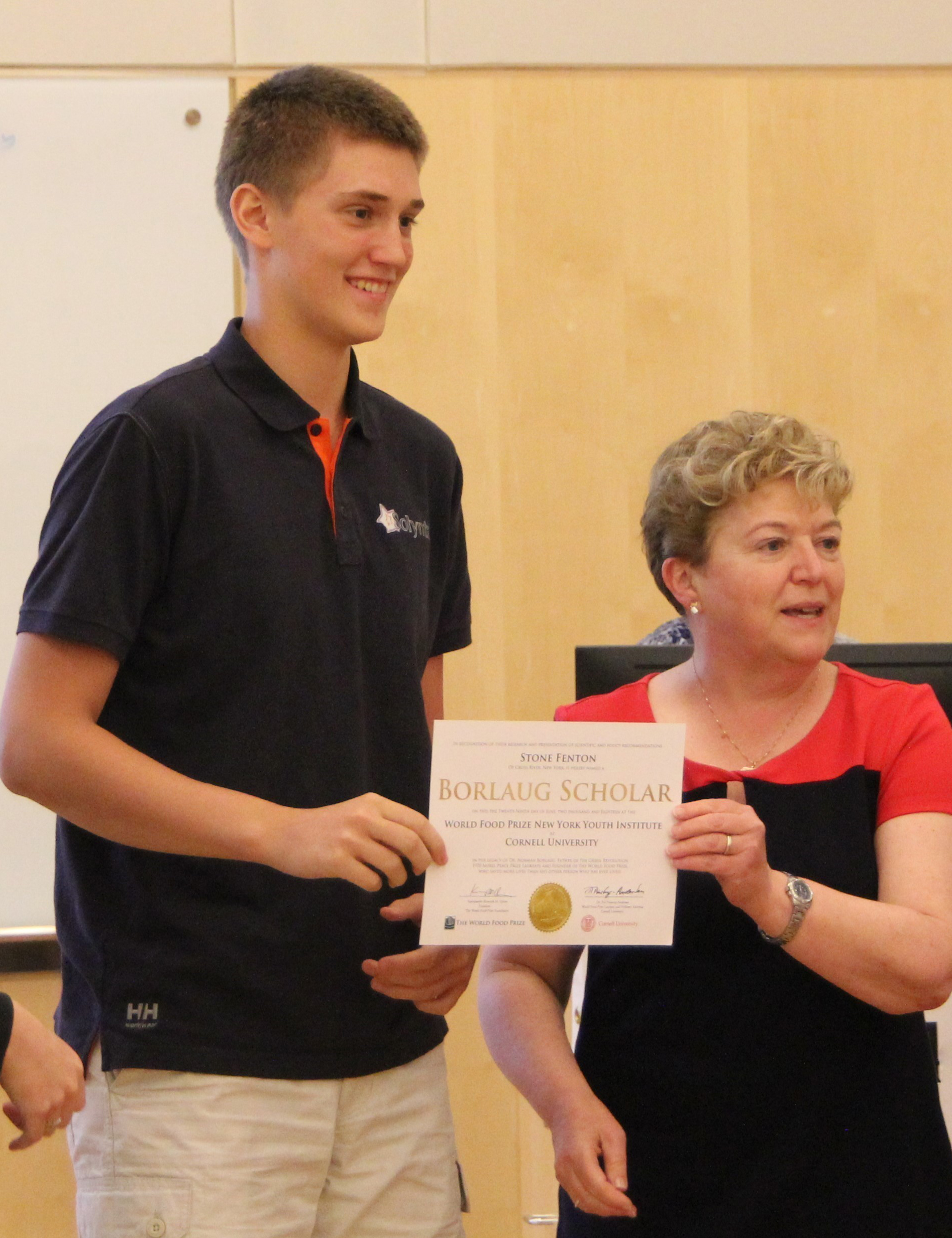 Stone was named a Borlaug Scholar for his work at Cornell, and, as one of the top performers at the Institute, was selected as a delegate to The World Food Prize Global Youth Institute, to be held in Des Moines, Iowa, in October. The Global Youth Institute is a three-day program where young leaders interact with Nobel and World Food Prize Laureates, and the more than 1,000 global leaders from 65 countries attending the World Food Prize's annual international symposium. Stone will present his research at the event.

“I have always loved the problem-solving aspect of math and science,” notes Stone. “Both fields exist simply to examine and solve problems, and food security is one of the world’s biggest problems. My hope is that when I am older, I will look back on my life and see where I used math and science to make the world a better place.”

Stone's internship was funded in part by a Robert Keyes Poole '50 Fellowship.

Established in memory of Robert Keyes Poole '50, Taft master from 1956 to 1962, Poole Fellowships are awarded each year to enable Taft students to engage in travel or in projects consistent with Mr. Poole's lifetime interest in wildlife and the environment.