Mihir Nayar ’19 spent six weeks volunteering in India during the summer of 2017. What he saw and learned there helped shape his Taft experience in the year that followed, when he conducted research on food access and the effects of malnutrition for his Global Leadership Institute (GLI) project, and hosted a “hunger simulation” to demonstrate his findings. It also made him determined to return to India, to continue his work with the children of Ahmedabad.

“The first time, I didn’t know what to expect from the local culture, the local customs, the language, the people, the type of service they believed in or would require of me,” says Mihir, who returned to India for three weeks last summer. “Knowing what to expect this time allowed me to go into the experience more open—to more clearly see and better understand the lives of the people I encountered working in the slums. I believe I came away from the experience a more genuinely compassionate person.”

Mihir’s volunteer efforts were overseen by Manav Sadhna, an NGO housed in Mahatma Gandhi’s 36-acre ashram in Ahmedabad, part of the West Indian state of Gujarat. Each workday began with prayers, chants, and meditation at the ashram.

“In many ways going back was the second part of a journey to finding my identity,” Mihir says. “Starting each day at the ashram allowed me to explore and practice my Hindu spirituality, while learning more about Gandhi and his philosophies of education, non-violence, and love, which are major elements of my cultural roots.”

The chants, Mihir says, were filled with messages about compassion and love for others, and represented different world religions, from Christianity and Judaism to Hinduism and Islam. At the end of the communal gathering, volunteers shared their personal stories and talked about their efforts from the previous day, sharing what they learned, and how they might do better as they made their way into the community for another day of work. For Mihir, that meant heading to the local Anganwadi, a center-based, preschool program providing culture- and values-based education for young children growing up in India’s slums, with additional focus on health, hygiene, and nutrition. Manav Sadhna has partnered with the government to run 78 Anganwadis in Ahmedabad, which provides two meals each day to more than 2,500 children ages three to six, as well as ready-to-eat meals for more than 3,000 children under the age of three. 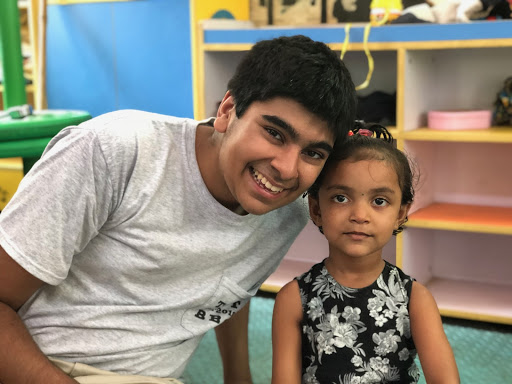 It was through his work at the Anganwadi that Mihir met Harashita in the summer of 2017. She seemed, he said, “lethargic”; she was the only child in her class who did not speak, or participate in classroom activities. Learning that she suffered from malnutrition inspired Mihir’s GLI project.

“It made me fully realize the link between proper nutrition and education—being able to fulfill your capabilities,” Mihir said.

This year, Harashita was verbal, even using some of the English words and expressions Mihir taught her classroom teacher during his first visit to Ahmedabad. She was also more eager to eat the protein-based meals provided at the Anganwadi. Part of Mihir’s work for Manav Sadhna involved collecting height, weight, and nutritional data for Harashita and her classmates. It was clear from that work that she was beginning to thrive.

“Seeing that our service was providing some benefit to these children was really important,” Mihir says. “I don’t want to say seeing them smile made me happy, but their health and happiness definitely transferred over to me, and allowed me to see that I was actually doing something that was helpful to them, despite the very difficult circumstances of their lives”

Manav Sadhna serves more than 8000 children and women through more than 35 projects; their work in the Anganwadis is just a small piece of their contribution to the community. Mihir also spent time with Manav Sadhna’s “Earn N Learn” project, designed to keep teens and adolescents in school, while providing some income to benefit their families. Recognizing that too many children were forced out of education and into child labor to help support their families, Manav Sadhna started the Earn N Learn program more than 20 years ago. Each of the 50 teens and adolescents working with Earn N Learn is required to attend school each day. After attending school in the morning and completing household chores, participants spend four hours at the Gandhi Ashram, where they pray, have a meal, and receive an hour of academic tutoring. The rest of the time is spent crafting cards, for which they are paid, and which Manav Sadhna sells in their bookstore. 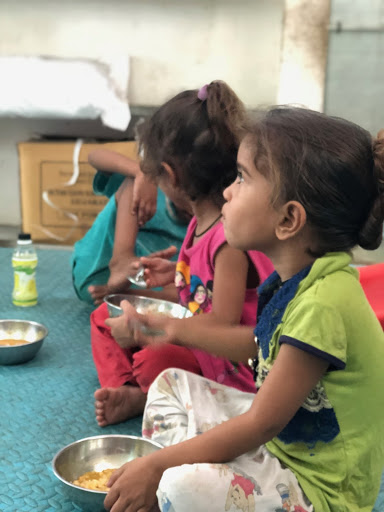 “One of the problems I recognized was that not enough of the cards were being sold in India to benefit the program in the way that they should,” Mihir explains. “I purchased several hundred of the cards, and plan to sell them at Taft this year for the holidays. I hope that the story behind it will influence people to buy them.”

Mihir will begin selling cards in advance of the holidays. He will send all of the money he makes back to Manav Sadhna; perhaps he will deliver it, himself.

“It is my plan to go back and continue my work there,” says Mihir. “Through my emotions and the emotions of the children I have met, I know there is a connection. They are genuinely benefitting, and so am I. And while the impact has already been profound, I definitely feel like there is some unfinished business there for me.”

Mihir’s travel was made possible in part with a William W. Hatfield '32 Grant

Established in 2010, this endowed fund was made possible through the generosity of Guy Hatfield ’65, Ross Hatfield, and the ongoing support of William W. Hatfield's family. The grant celebrates the ideals of Horace Dutton Taft—service above self—and is given annually to one or more students whose commitment to volunteerism brings to life the message behind Taft's motto: Non ut sibi ministretur sed ut ministret—Not to be served but to serve.

Mihir’s time in India helped him fulfill the requirements of Taft’s Global Studies and Service (GSS) diploma program. Learn more about it here.