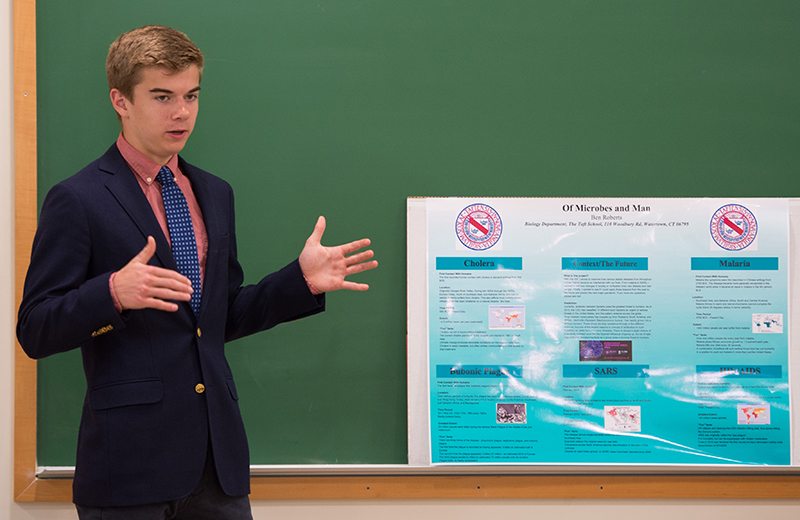 Ben Roberts ’18 has been fascinated by disease since he was in middle school. That’s when he attended a summer program through The Johns Hopkins Center for Talented Youth, and where he studied its history.

“The program really sparked my interest in disease,” said Ben. “I always had in the back of my mind that I would like to pursue it further, but had not yet found an opportunity in the classroom. I was taking biology this year, and thought that the ISP program would not only be an opportunity to add more depth to my course of study, but that it could also be an interesting overlap with my biology coursework.”

To some degree, Ben picked up his study of disease where he had left off earlier—in the history books.

“I wanted to look at how human disease and human society have influenced each other,” Ben explained. “That evolved into looking at how the choices we make as a civilization influence and create our own pandemics—our own scourges.”

Ben spent most of the fall researching five pandemics. He studied early afflictions, including malaria (which can be traced back 4,000 years), the Black Plague, and Cholera, and the relatively new HIV/AIDS crisis. He also looked at SARS, a “flash” pandemic.

“SARS is interesting because spread so quickly in just in a few months, but ended in just over a year,” Ben said. “It was fascinating to study how quickly a pandemic can spread in a modern context.”

Ben analyzed how societal changes, like the Industrial Revolution and an increasing globalization, bring changes in human behavior and human health.

“I used that historical background to predict what the next big human pandemic or health crisis will be,” Ben revealed.

That crisis, he predicts will be antibiotic-resistant bacteria. And just as human behavior causes pandemics, Ben believes, it can also prevent them.

“If we don’t change our behaviors antibiotic-resistant bacteria will become more problematic. We can impact that by using antibiotics the way they are meant to be used,” said Ben. “They are an incredible weapon against disease, but right now they are misused and overused and in animal feed, which is proven to build resistance to e-coli and salmonella a whole host of disease we don’t want to build resistance to. We need to limit antibiotics for sub-therapeutic or preventative use, and use them as prescribed— that means finishing the complete course of therapy so there are not resistant bacteria left over. There needs to be a greater public awareness understanding, and greater accountability on the part of corporations. Only time will tell.”