Menu
The Future of Cancer Therapies 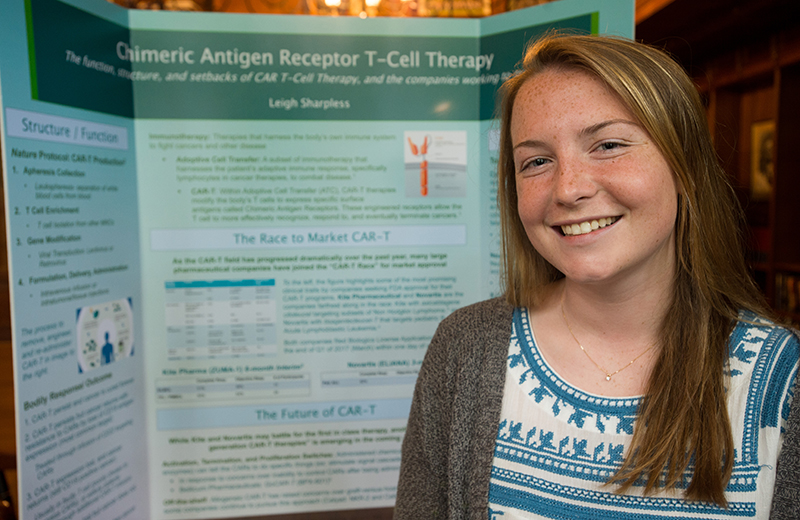 “It’s just one of those things where the results are so great that you just have to hear more,” said Leigh.

Leigh spent the past two summers working in a chemotherapy testing lab at the Lineberger Cancer Center at the University of North Carolina. But it was the experimental research being done across the hall that really captured her attention.

“CAR-T is an immunotherapy, so it harnesses the body’s own immune system to fight cancer,” explained Leigh. “The process removes T-cells, genetically reengineers them to be more effective at fighting your individual type of cancer, then reintroduces them to the body. It’s really new, and up and coming. Immunotherapies in general are just the future of cancer therapy.”

Leigh looked at the biology, economics, and ethics of CAR-T for her ISP. She followed a number of biotech news outlets, and kept a detailed, daily journal of developments in the CAR-T industry.

“The nature of this specific project is so unique,” said Leigh. “Drug development usually takes years. But CAR-T has progressed so much and so quickly—it really only began at the start of 2016. They are looking at it as a therapy for leukemia and lymphomas, and getting fantastic results—upwards of 50% complete remission. The FDA is eager to get it approved because it has such good data. In fact, two leading companies filed for FDA approval about a month ago.”

Leigh was the first upper mid in the history of the program to earn formal recognition for her work.