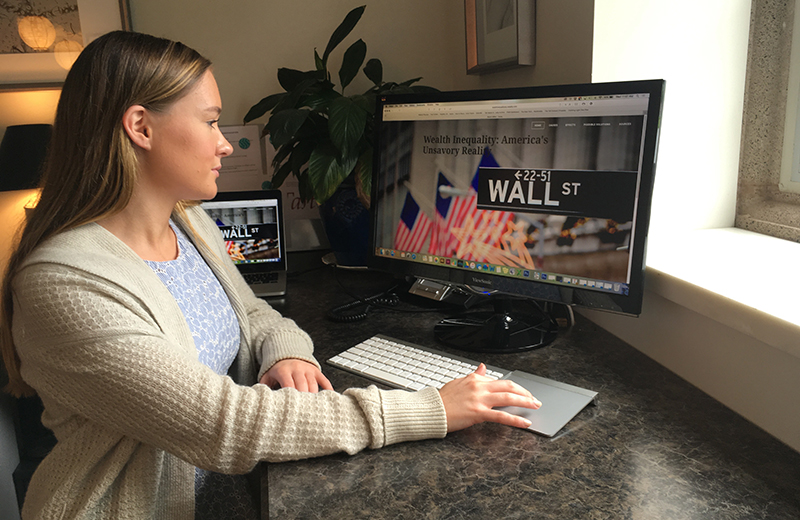 Maeve Millen ’17 has been a researcher, of sorts, since she was a very little girl.

“I have three older siblings—some much older—so it seemed like every conversation when I was little was intellectually over my head. If I wanted to keep up at the dinner table, I had to be informed, and to learn things on my own,” said Maeve.

Many nights, that dinner table conversation was politically charged, with an eye on the economy.

Maeve’s childhood experience not only left her well informed, but it nurtured a love of learning, and a penchant for independent research. She channeled all of that into an ISP project exploring wealth inequity in America. Maeve looked at the causes of the disparity, including wage, income, and education gaps, as well as its impact, which she believes lies at the heart of many of the social problems plaguing the United States today. Her goal, she says, was education.

“What I found in my research is that Americans think the rich have a lot of money, but middle class is holding their own. In reality, the rich people hold a huge majority of the wealth, and the middle class and the lower class are falling far behind. The better people understand wealth inequality the more that they will be outraged about it, and the more willing they will be to take action,” said Maeve. “There is a strong correlation between the degree of wealth inequality in our country and the stability of the economy; when the gap is great, the economy tends to be unstable and things like bank failures tend to follow. The last time we had this degree of wealth inequality was 1928.”

Maeve delivered her findings—and her recommendations—in the form of a website.

“I learned a lot about research through the ISP process, a lot about evaluating the quality of sources, a lot about assessing what information would actually be useful to my audience—” noted Maeve. “a lot of skills that I think are going to be very important in my future.”