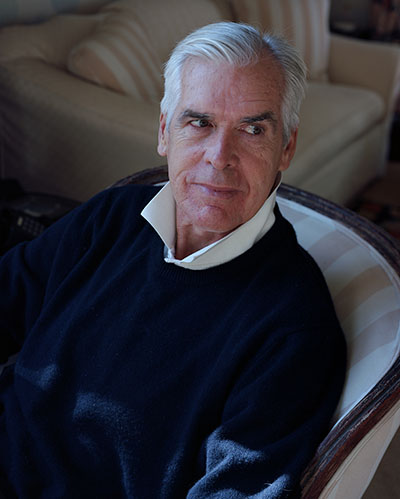 "America needs to radically simplify its operating system and give people—officials and citizens alike—the freedom to be practical," writes author, lawyer, and philanthropist Philip Howard '66. "Rules can't accomplish our goals.  Only humans can get things done."

Getting things done is something Howard knows a lot about. He is the founder of Common Good, a nonpartisan reform coalition that describes itself as working to simplify government to put humans back in charge, cut mindless red tape, and limit the bureaucracy that prevents progress in America. Howard is senior counsel at the New York City law firm Covington & Burling. He has appeared on The Daily Show with Jon Stewart and written four books as well as the introduction to former Vice President Al Gore's Common Sense Government. Howard also advises politicians, works with the White House, and regularly testifies for Congress, which lies at the heart of his mission to create a more efficient and effective government. In May, Howard will be recognized for this impressive body of work with The Horace Dutton Taft Alumni Medal, Taft's highest alumni honor.

After graduating from Taft, Howard attended Yale University and the University of Virginia School of Law before getting a job at a Wall Street law firm. It was during this time that he began to contemplate the complexities of the government. "I began to wonder why it was that my friends in government couldn't do what they thought made sense," he says. "Why was government so clunky? I ended up having this epiphany that law can't be precise. If you make law precise, people spend their whole day in rule books and they can't get the job done. They're just complying with all these rules that may or may not make sense."

This idea hadn't received much attention or been explored on a national level at the time, so when Howard drafted a book proposal, Random House was eager to publish it. The book, The Death of Common Sense (1995), became one of the bestsellers of the year.

"Phil is a terrific recipient of the HDT Alumni Medal. His initial book was one of the best non-fiction works I have ever read. His ideas have gained in popularity of late on all sides of the political spectrum. I hope that in some small way our award invigorates and furthers his efforts to what I believe would be the great benefit of all Americans," notes Holcombe T. Green III '87, trustee and chair of the Horace Dutton Taft Alumni Medal Committee.

After the success of his first book, Howard continued to work toward simplifying government. In addition to releasing a second book, he founded Common Good, an organization focused on building support for governmental overhaul by educating the public. "The challenge is persuading the public that you can't fix this system. It's not a management problem, it's a philosophy problem. You have to put humans in charge again," explains Howard. Today, Common Good's advisory board is comprised of some of the country's well-known leaders, including John Danforth, former U.S. senator and ambassador to the United Nations; Bill Bradley and Alan Simpson, former U.S. senators; Tom Kean, former governor of New Jersey; and Richard Thornburgh, former U.S. attorney general and governor of Pennsylvania.

Howard and Common Good are working on several reforms. Currently, they are the leading group advocating for more streamlined infrastructure practices that still honor important environmental goals. Their three-page statute would not only introduce a more productive process, but it could also create a million new jobs.

Through books, speeches, and extensive advising and advocacy work, Howard is fighting to reestablish the American people's freedom. He explains why this is so important in his 2010 TED Talk, "Four Ways to Fix a Broken Legal System," which has more than 625,000 views:

"If teachers don't have authority to run the classroom and maintain order, everybody's learning suffers," says Howard in his talk. "If the judge doesn't have the authority to toss out unreasonable claims, then all of us go through the day looking over our shoulders. If the environmental agency can't decide that the power lines are good for the environment, then there's no way to bring power from the wind farms to the city.…What the world needs now is to restore the authority to make common choices. It's the only way to get our freedom back, and it's the only way to release the energy and passion needed so that we can meet the challenges of our time."

In addition to his philanthropic work with Common Good, Howard is an active leader in New York City. He chaired the committee that installed the "Tribute in Light" memorial for victims of 9/11, and he serves as chair emeritus of the Municipal Art Society, which led the battle to save Grand Central Terminal. Throughout his life, Howard says that Taft's motto has never been far from his mind. It taught him to value service, and he hopes that his work inspires others. "I want people to feel like they have much more ownership over their own choices and that they can make a difference on many different levels in our society," says Howard.

"Philip Howard has been guided by Taft's motto his entire life, and his labor, intellect, and vision are needed today. His belief—that we all can make a difference—is something every Taft graduate might aspire to," comments Head of School Willy MacMullen '78.