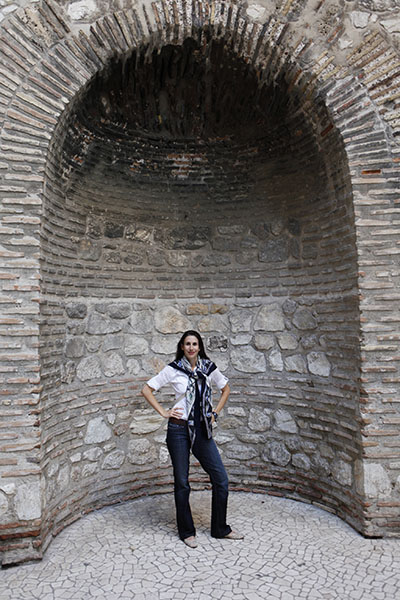 Lizzie Macaulay-Lewis ’98 was a student at Cornell when she went on an archaeological dig at a Roman garden in Italy.

“It was really just digging in the dirt,” says Macaulay-Lewis, “but there I was on the day of solar eclipse, and I found a Roman planting pot.”

Macaulay-Lewis completed a doctorate in classical archaeology at Oxford and now teaches in City University of New York’s Liberal Studies Master’s Program at The Graduate Center. While still interested in gardens, her research focuses on the material culture of the Roman, Late Antique, and Islamic worlds, and Islamic Architecture. She has conducted research as a field archaeologist and ceramist in Italy, Jordan, Greece, Syria, and Egypt. Recently, she has been helping document sites that are endangered due to conflicts, especially in Syria.

“Gardens were a unifying factor across the vast Roman empire,” notes Macaulay-Lewis.

The Umayyad Mosque in Damascus is one of her favorite sites, with its layering of Islam, Christianity, and pagan forms of worship, and glorious mosaics. Originally the site of an ancient Aramaean temple to the storm god Hadad, the Romans built the Temple of Jupiter on the same site. The mosque and a church dedicated to John the Baptist shared the space until 706 CE, when the Christians were given a new space for a church and the Muslims took over the complex.

“When I entered the mosque for the first time, it was terribly moving—how buildings have these whole lives that you can be blessed to experience,” she says. “There is this sense of communal life, whole families catching up with friends and neighbors. It’s not only a place of worship—it is like a community center. I think that can be hard to comprehend for those of us who live in a more secularized way. I felt very welcomed in that space.”

Macaulay-Lewis is currently involved in two digital projects that complement each other. The first is a series of lectures and essays for Smarthistory.org (part of online Khan Academy), which are free and publicly available.

The other is a free multimedia, dual-language (Arabic/English) resource for the study of the Middle East: the Manar al-Athar website. Based at the University of Oxford, the site provides high resolution images of archaeological sites across the areas of the former Roman empire that later came under Islamic rule, including Syro-Palestine/the Levant, Arabia, Egypt, and North Africa.

“I believe that knowledge for the sake of knowledge has unforeseeable benefits,” says Macaulay-Lewis. “We don’t always know what will be useful in the future. But when conflicts end, when people come back together, it is often through architecture, through art; they have an important role, as they have after wars throughout history.”