Menu
The Treasures of Trade 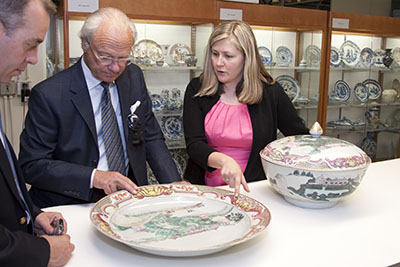 These days it’s common to hear people talk of living in a global age as if it were a relatively new phenomenon. In reality, asserts Karina Corrigan ’88, many were experiencing such an interconnected world as early as the 16th century, and certainly by the 17th century, because of trade.

Corrigan should know. As the Peabody Essex Museum’s H.A. Crosby Forbes Curator of Asian Export Art, she is charged with overseeing the world’s most comprehensive collection of fine and decorative art made in Asia for export to the West. “Founded in 1799, the Peabody Essex Museum’s collection is among the finest of its kind, boasting superlative works from around the globe and across time. Some of these works of art haven’t moved much more than 200 yards in 200 years,” she says. By exploring these cross-cultural works of art from multiple perspectives, Corrigan explains, we can tap into our own global history.

As a curator, this exploration is precisely Corrigan’s charge, though she concedes that the nature of her work isn’t clear to everyone. “An old friend recently told me that he thought I cleaned paintings all day, because really, what else is there to do at a museum?” she says with an understanding laugh. Turns out, there’s plenty, as a quick perusal of Corrigan’s resume reveals.

Over the course of her tenure at PEM, Corrigan has dedicated herself to revealing the information harbored in the museum’s myriad works of art, organizing eight exhibitions, including last year’s Asia in Amsterdam: The Culture of Luxury in the Golden Age, which PEM co-organized with the Rijksmuseum, Amsterdam. Comprised of 200 outstanding examples of Asian and Dutch works of art, the landmark exhibition explored the “transformative impact that Asian luxuries had on Dutch art and life in the 17th century” and brought new understanding to the Dutch Golden Age and its relationship to Asia. 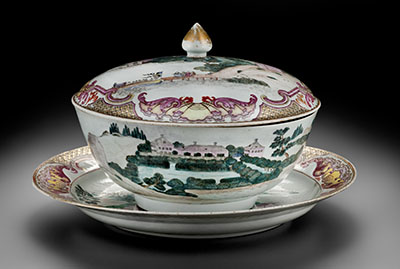 “The exhibition and accompanying catalog generated a great deal of new scholarship and presented a lot of information that was not previously available in English,” Corrigan says. Asia in Amsterdam was named the Best Thematic/Historical Show in a Top 10 list by the Boston Globe art critic Sebastian Smee for 2016.

Although on view for just five months, Asia in Amsterdam occupied Corrigan for much longer. She began thinking about the show in 2009 and then dedicated four years of intensive work to making her vision a reality. Objects were drawn from the collections of the Peabody Essex Museum and the Rijksmuseum, as well as from some 60 lenders from around the world. Thirty authors contributed scholarly essays to the accompanying catalogue. “I’m only just recovering,” she says wryly. “I’ve worked on a number of exhibitions in my career, but this one was my favorite, as well as the largest I’ve undertaken to date. Ideally, I’d love to have the chance to work on a few other shows of this scale by the time I retire.”

Corrigan’s interest in these types of cross-cultural issues stretches back years. She earned a B.A. in art history and medieval Renaissance studies from Wellesley College; an M.S. in historic preservation from the University of Pennsylvania—writing her thesis on the influence of Turkish design on late 19th-century interiors—and an M.A. from the Winterthur Program in American material culture.

But it is retired Taft history teacher John Wynne whom Corrigan credits with initially helping her to understand that history wasn’t just battles and kings. “I wrote a paper for him on the changing nature of fashion before and after the French Revolution,” she says. At the same time, Taft instructor Mark Potter ’48 introduced her to the joys of art history. “I think it was pretty unusual to have the opportunity to take an art history class in high school, but I’m so grateful that I had that exposure because I absolutely loved it,” she adds.

That course clearly left an indelible mark—this summer Corrigan will celebrate her 20th anniversary as a member of PEM’s curatorial staff. “I feel very fortunate to do the work I do,” she concludes. “No two days are the same, and I have a lot of autonomy as to how I spend my time. I’ve had the chance to travel extensively throughout Europe and Asia on behalf of the museum; I have many opportunities to research and write, which I love; and I’m able to lecture frequently about the collection. I feel that my role is to share arts, culture, and history with others through tangible links to the past, and this job makes that possible. It’s incredibly rewarding.”