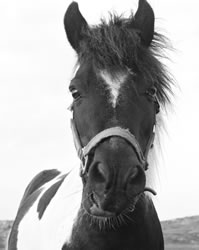 Two parallel roads, one in coaching and teaching and the other in his love of the outdoors and photography, have led Jon Guiffre to his current position at Taft. Guiffre is a member of the Development team at The Taft School and a coach for the soccer and ice hockey teams.

His work has evolved as his interests and professional career have run their course over the past 13 years. The focus of his work has shifted from primarily creating images of people to landscapes and the textures and patterns produced in the natural world. "My work in photography and painting has never been about sending a message to the viewer. Everyone employs the broad world of 'art' in their lives in different ways. For me it has always been about looking at something beautiful for the sole purpose of enjoying that photograph or painting. I'm not trying to be clever-just trying to create something nice to look at."

Jon Guiffre's path began during his undergraduate work at the University of Vermont where he was a Political Science Major and Studio Art Minor. His Art Minor focused on Photography, Painting, and Three Dimensional Sculpture. It was also at UVM that his career in coaching began as the Assistant Coach of the Women's Hockey Team there. After graduating in 1996, Guiffre went to teach and coach at small boarding school in Central New Hampshire. There he taught photography and computer graphics as well as English and history. He also continued to coach his primary sport, hockey and his secondary sport soccer. In 1999, he became a full time coach at the North American Hockey Academy in Stowe, VT. After two years at the Hockey Academy, he accepted a position as Assistant Coach of the Women's Hockey team at Brown University. There he helped guide the Bears to an appearance in the 2001 Division I National Championship game as well as three consecutive appearances at the ECAC Final Four.

The years between 1999 and 2002 were responsible for rekindling his involvement in his photography. "I was sitting in my house one day during the 2002-3 season at Brown, and realized I hadn't touched a camera in three years. I had been so busy and involved with hockey, I simply didn't have the time. I realized a part of who I am was missing and I immediately bought a new camera and a box of film."