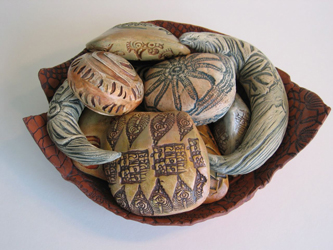 My work is an on-going exploration of intimate connections with my essential experience observing botanical forms, animal variations and industrial elements. Conceptually, I see this group of paintings and drawings linked and telling a story. Its interpretation is somewhat dependent on the viewer’s experience. There are three main interdependent themes to the recent paintings.

I have been painting plein-aire landscapes for years, putting myself out in the elements, painting for hours as the light and atmosphere shifts and changes. Lately, I have being looking to artists like Turner, Whistler, Twatchman, and Inness. They have an uncanny ability to evoke a visceral emotional response with their landscape, often without giving too much detail. The ethereal nature of fire, steam and ice and their connection to my passionate concern about our global condition are underlying inspirations for these pieces.

2. Migration/escape: Endangered animals in motion, predator and prey.
I have always been interested in animals, especially the Victorian era penchant for collection and cataloguing. I have spent a good amount of time drawing at Natural History museums around the world. Most recently, I have been thinking about motion, migration and the inherent patterns that animals follow; also, predatory behaviors and how these parallel the human condition. The struggle for survival in our ever-changing environment is the foundation for these animal pieces. Ambiguity through blur and the use of multiple panels should evoke a feeling of fleeting motion and sound.

3. Data gatherers/topographies: Weather satellites, buoys, ocean surface analysis charts.
I spent several years living aboard a wooden sailboat. My time at sea put me out into sometimes the harshest elements where I had only the sound of bell buoys and charts to navigate unknown waters. The more industrial paintings and drawings in this show relate to this period of time. They also connect to how data itself can be beautiful evidence. The large drawings are configured topographies based on abstractions of the smaller ink pieces. These could be seen as escape routes or somehow data referring to changes in weather patterns. These weather patterns effecting both land and animal alike.

Where forms are beginning to dissolve and be set into motion, the paintings approach a more visceral connection with time, atmosphere, environmental extremes in temperature and sound. I have always been consumed by the connections between science and art. Lately, I have adopted the character of chronicler or scientific recorder in the studio as I make the work. I am documenting the degradation of the planet, recording futuristic topographical data and the last fleeting glimpses of the beasts that inhabit the earth.

Born in New York City, Gail and her family moved to India when she was 11, where she lived until she was 18. She returned to the United States to study at Syracuse University's College of Fine Arts and graduated in 1961 with a BFA in painting. She was an art teacher in the Syracuse Public Schools for three years, and then traveled back to India with her husband, John, to teach at a small boarding school in the mountains of Ootacamund, South India.

Gail taught art at Taft for 33 years, from 1968 to 2000. She introduced an arts curriculum to Taft, which included her courses in Printmaking, Drawing, Pottery, Batik and Design, and was head of the Arts Department from 1987 to 1993. She received her MS in Art Education at the University of Michigan and Southern Connecticut State University in 1977, and studied writing and art at Wesleyan University. In addition to her teaching at Taft, Gail was faculty advisor to over 300 Independent Studies Program students, and head of the annual Spring Arts Fair. She was awarded the Farwell Grant in 1985 to travel to India and photograph artists and their work at village craft centers. She also received the Bell Travel Fellowship in 1989, " in recognition of her inspirational leadership of Taft Students," and traveled to Kodaikanal School, South India, to set up a student exchange program with Taft, and study batik at the Chola Mandal Artists' Village in Madras. She proposed that a gift from the Rockwell brothers ('41 and '44) to the Arts Department in 1996 be used to initiate and support a visiting artists program at Taft. She was awarded the van Beuren Chair in the Arts in 1996 as "a tribute to her outstanding contributions to her students and to the creative life of Taft," and the William and Lee Abramowitz Award in 2000, for teaching excellence. After retiring from Taft in 2000, she taught ceramic art at the Dunedin Fine Arts Center on the West Coast of Florida from 2001 to 2006. She now works on her clay sculpture and writing in her studio on Cape Cod, where she lives with her husband, John. They have four children, and four grandchildren.