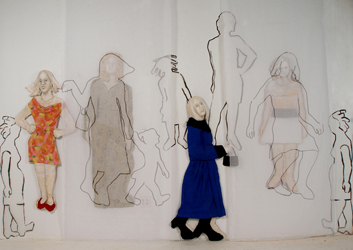 Susan Mastrangelo is an artist in New York City who also teaches at the Buckley School. Her recent one-person exhibitions have been at The Square One Gallery, The Durst Organization, Art Resources (online) and Locus Media. Her work has been chosen for numerous group shows, including this summer in Worms, Germany. She is the recipient of two grants from the Pollock Krasner Foundation and has received residencies at the Yaddo Foundation, the Tyrone Guthrie Centre in Ireland, the Triangle Workshop with Anthony Caro, and the Virginia Center for the Arts. Her work has been reviewed in the New York Times, the New York Observer, and ARTnews. Her most recent one-person exhibitions have been at Square One Gallery (2005), The Durst Organization (2004), and the online exhibit by Art Resources Transfer, all in the city of New York. She was educated at the New York Studio School and received her B.F.A. from the Kansas City Art Institute and her Master’s degree from Boston University.

As metaphors of life past and present, images of women flat or in relief emerge from the backdrop of a wall and then randomly disappear behind transparent veils of ghostlike female images. My flat figurative sculptures, with their white plaster-casted faces, hang on the wall and are accompanied by drawings on mylar and or hanging scrim. My linocut prints take their form as dark silhouettes comprising the human population as they proceed to carry out their daily routines. Personalities in both mediums reflect the contemporary human condition as it exists in our lives, as well as the absolute of time. Each could be a character one would see on the street as she continues to echo the comedy and tragedy of life.