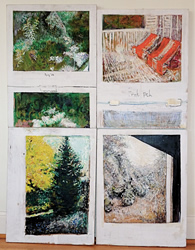 Bruce Stiglich received his BFA from the Philadelphia College of Art in 1973 where he was awarded the Art Achievement Award in 1972. He worked for over 30 years in Visual Display where he was a Director for high fashion companies such as Bloomingdales, Calvin Klein, Banana Republic and The Limited. Mr. Stiglich received his MFA in Painting from SUNY Albany in 1987 where he received the President’s Award. He is teaches Concept and Development to Fashion Design students at the Parsons School of Design and Painting, at the Pont-Aven School of Contemporary Art and pursues his career as a full-time painter.

My work begins with a discovery of found images that to me seem incomplete. The process of completing the image is self-referential in nature. They deal with issues of memory, chance, mysticism, puzzles and pieces. That these pieces fit and don't fit simultaneously, create a logical formal order and a less logical meaning.