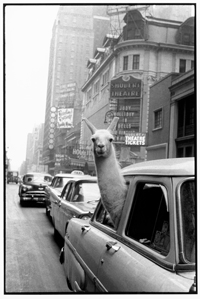 “Photography is a strange phenomenon. You trust your eye, and you cannot help but bare your soul. One's vision finds of necessity the form suitable to express it.”

Ingeborg Mörath was born in Graz, Austria. Her parents were scientists whose work took them to different laboratories and universities in Europe during her childhood. Educated in French speaking schools, Morath and her family relocated to Berlin, where Morath’s father directed a laboratory specializing in wood chemistry. Morath was registered at the Luisenschule near Bahnhof Friedrichstrasse. Morath’s first encounter with avant-garde art was the Entartete Kunst (Degenerate Art) exhibition organized by the Nazi party in 1937, which sought to inflame public opinion against modern art. “I found a number of these paintings exciting and fell in love with Franz Marc’s Blue Horse,” Morath later wrote. “Only negative comments were allowed, and thus began a long period of keeping silent and concealing thoughts.”

War broke out in Germany in 1939. At university, Morath studied languages. She became fluent in French, English, and Romanian in addition to her native German (to these she later added Spanish, Italian, Russian, and Chinese). Towards the end of the war, Morath was drafted for factory service in Tempelhof, alongside Ukrainian prisoners of war. During an attack on the factory by Russian bombers, she fled on foot to Austria. In later years, Morath refused to photograph war, preferring to work on stories that showed its consequences.

After the Second World War, Morath worked as a translator and journalist. In 1948, she was hired by Warren Trabant, first as Vienna Correspondent and later as the Austrian editor, for Heute, an illustrated magazine published by the US Information Agency in Munich. In 1949, Morath was invited by Robert Capa to join the newly founded Magnum Photos in Paris, where she would work as an editor. Working with contact sheets sent into the Magnum office by founding member Henri Cartier-Bresson fascinated Morath. She wrote, “I think that in studying his way of photographing I learned how to photograph myself, before I ever took a camera into my hand.”

Like many Magnum members, Morath worked as a still photographer on numerous motion picture sets. Having met director John Huston while she was living in London, Morath worked on several of his films. Huston’s Moulin Rouge (1952) was one of Morath’s earliest assignments as a photographer, and her first time working in a film studio. When Morath confessed to Huston that she had only one roll of color film to work with and asked for his help, Huston obtained three more rolls for her, and occasionally waved to her to indicate the right moments to step in with her camera. Huston later wrote of Morath that she “is a high priestess of photography. She has the rare ability to penetrate beyond surfaces and reveal what makes her subject tick.”

In 1960, while photographing the making of The Unforgiven, starring Audrey Hepburn, Burt Lancaster, and Audie Murphy, Morath accompanied Huston and his friends duck hunting on a mountain lake outside Durango, Mexico. Photographing the excursion, Morath saw through her telephoto lens that Murphy and his companion had capsized their boat 350 feet from shore, and that Murphy, stunned, was near to drowning. A skilled swimmer, Morath stripped to her underwear and hauled the two men ashore by her bra strap while the hunt continued uninterrupted.

Morath worked again with Huston in 1960 on the set of The Misfits, a blockbuster film featuring Marilyn Monroe, Clark Gable, and Montgomery Clift, with a screenplay by Arthur Miller. Magnum Photos had been given exclusive rights to photograph the making of the movie, and Morath and Cartier-Bresson were the first of nine photographers to work on location, outside Reno, Nevada, during its filming. Morath met Miller while working on The Misfits, and (following Miller’s divorce from Monroe) they were married in 1962.

Along with Eve Arnold, Morath was among the first women members of Magnum Photos, which remains to this day a predominantly male organization. Many critics have written of the element of playful surrealism that characterizes her work from this period. Morath attributed this to the long conversations she had with Cartier-Bresson during their travels in Europe and the United States. Her work was motivated by a fundamental humanism, shaped as much by the experience of war as by its lingering shadow over post-war Europe. This motivation grows, in her mature work, into a motif as she documents the endurance of the human spirit under situations of extreme duress as well as its manifestations of ecstasy and joy.

At home and wherever she traveled, Morath sought out, befriended, and photographed artists and writers. During the ’50s she had photographed artists for Robert Delpire’s magazine “L’Oeil,” including Jean Arp and Alberto Giacometti. When she went to Saul Steinberg’s home to make a portrait, Steinberg came to the door wearing a mask that he had fashioned from a paper bag. Over a period of several years they collaborated on a series of portraits, inviting individuals and groups of people to pose for Morath wearing Steinberg’s masks. The writer Philip Roth described her as “the most engaging, sprightly, seemingly harmless voyeur I know. If you’re one of her subjects, you hardly know your guard is down and your secret recorded until it’s too late. She is a tender intruder with an invisible camera.”