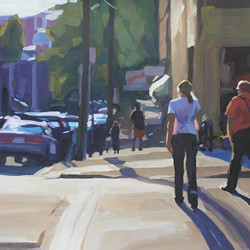 Lisbeth Firmin was born in Paducah, Kentucky in 1949. She is a contemporary American realist known for her urban landscapes. For over three decades her work has been in hundreds of solo and group shows across the country and internationally. In 2000, she left New York City and bought an old storefront in the village of Franklin in upstate New York, where she paints every day.

Firmin's paintings are included in the 2009 Winter Issue, Stone Canoe Review, Syracuse University. She was cover artist for the 2008 spring issue of Epoch, Cornell University's literary magazine and was the featured artist in the 2008 summer issue of the Gettysburg Review. Her urban landscape paintings were included in "Five Women Artists in New York", curated by Ken Ratner, Flushing Town Hall, 2008. Recent awards include a 2007 New York Foundation for the Arts Fellowship for printmaking (Lily Auchincloss Fellow) and a Merit Award at the 2007 Roberson Regional Art Exhibition, Binghamton, NY, juried by Philip Pearlstein. Firmin was awarded a Community Arts Funding Grant, New York State Council on the Arts in 2007. Other awards include a Pollock-Krasner Foundation Grant, the New York Print Club Emerging Artist Award, the CCVA Award at the Chautauqua Center for the Visual Arts, first prize in the LANA International Arts Competition; along with full fellowships to the MacDowell Colony, National Seashore Residency, the Vermont Studio Center and the Saltonstall Arts Colony. She has been a guest artist (printmaking) at the Vermont Studio Center from 2001 to 2004, working with master printer Sarah Amos.