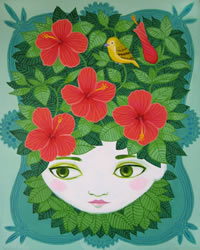 Airlie specializes in charming children's book illustration. Her preferred medium is gouache on paper. She has been published in the US, Europe, and Korea.

“I grew up in Carmel, California. It is a beach town, but not the hot kind with boardwalks and inner tubes. Carmel is the cold, crisp kind of beach town with a deep blue abyss and green-black cypress trees. The sand is white and squeaks when you walk on it, and you can hear sea lions and seals and crows. Carmel, in my imagination, is more” Goonies” than “Gidget”.

My favorite read-alouds were Serendipity and Frog and Toad are Friends. I would ask my Mom to draw Serendipity - copy it exactly - from the cover. I would try, but my lines were wobbly and it just didn't turn out right. How could anyone draw those shapes? Mom said I would be able to do it if I kept practicing. I think I asked her to copy the Serendipity cover at least ten times. Other all-time favorite picture books were Turtle Tale by Frank Asch, The Long Dive by Mr. and Mrs. Smith, and of course all the Maurice Sendak things.

Craft time at school was, of course, my favorite time. In high school I found that I didn't want to leave Ms. Chic's Art Room, with its still lives and closet full of unlimited art supplies, including the exotic gouache. I was accepted to Rhode Island School of Design. Off to Providence!

After approximately a zillion figure drawings and studies in oil, a study abroad program in Rome, stints in San Francisco and New York City, I have my own little studio near Princeton. Around here you can see fireflies, rabbits, deer and woodchucks all at once!”