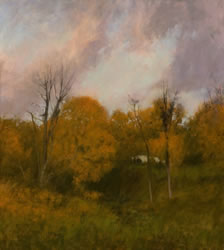 Curt Hanson's New England landscape paintings are highly sought after by collectors from around the globe. He has formed a deep connection with nature and uses the canvas to express this bond. The natural world serves as his inspiration, and each painting captures the essence of New England.

Hanson began his journey as an artist at Fort Wright College in Washington State. He had the opportunity to study under Charles Palmer and Stan Taft. He continued on to New York City where he soaked up the skills of George Inness. He then moved to Boston and received invaluable wisdom and art direction from Ives Gammell, the Boston School painter who trained with William Paxton. In 1979, Hanson made his home in Northwestern Connecticut, where he continues to strengthen his link with nature through his work as a painter.

Curt's love of the sacred landscape leads him on painting sojourns. He recently returned from an extended stay in Thailand where he reveled in the magnificent beauty of Southeast Asia.