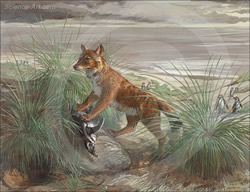 Mike Rothman has been a professional natural history illustrator since the mid 1980's. He has worked as a field artist on biological expeditions to the Samoan Archipelago, Brazil, and on three occasions to Central French Guiana. Rothman made his first connection with the New York Botanical Gardens through Ghillean T. Prance, then Director of Science, who arranged for him to prepare a painting depicting the canopy of an Amazonian rain forest for publication in the German magazine, Merian. Because of the scientific accuracy of his natural history illustrations as well as the beauty of his paintings, he was asked by Scott A. Mori, Curator of Botany at the NYBG, to prepare a drawing to depict selected species of Ericaceae in an Andean habitat…The painting was so spectacular that Mr. Rothman was commissioned to prepare paintings to depict the work of the other curators.

Mr. Rothman has illustrated numerous books, including one on the ethnobotany of the Samoan archipelago, Nafanua: Saving the Samoan Rain Forest by Dr. Paul A. Cox, in which his line illustrations introduce each of the chapters, and children’s books—for example, Inside the Amazing Amazon, Jaguar in the Rain Forest, The Mystery of Mars, At Home with the Gopher Tortoise: The Story of a Keystone Species, and Here is the Tropical Rain Forest. Michael is also well known for his natural history and anthropological paintings which in the past frequently appeared in color in the Tuesday Science Section of The New York Times as well as in Natural History magazine.

Mr. Rothman is currently preparing designs to be used by Ace Coinage, Inc. (http://www.acecoinage.com) in the production of collectible medallions and accompanying paintings with the goal of educating others about some of earth’s most fascinating and endangered creatures.