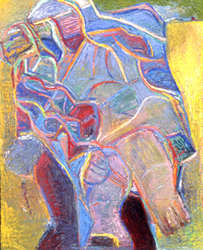 In Deborah Kahn’s work, gesture is annealed by dense paint; thousands of brushstrokes and brilliant colors alter the integrity of movement as bodies merge and evolve with the space around them.

“My process and ideas are always evolving and changing, what remains constant is my belief that painting must translate feeling into form. I draw from old masters and artisans in an effort to learn more about the language of painting and drawing. By creating feeling through form, I hope to present to others my piece of the truth, my worldview and my mind on the canvas….

The pressure that I put on myself is to make painting where there is no separation between color and drawing, and where space has no beginning and no end. Nothing can be separate – everything is part of a continuous space. The image, the skin of the paint and the colored marks are one. Like living things, my paintings must appear as masses that cannot be penetrated.” Deborah Kahn

Deborah Kahn is a painter who lives in Maryland and teaches painting and drawing at American University in Washington DC. Ms. Kahn is the recipient of a John Simon Guggenheim Fellowship for painting and the Mellon Grant from American University. She has exhibited her work regularly at the Bowery Gallery in New York City since l980, as well as in Philadelphia, Washington D.C. and in Charlottesville at Les Yeux du Monde. She was educated at Boston University, the Kansas City Art Institute, and Yale University.