East/West: A selection by a private family foundation 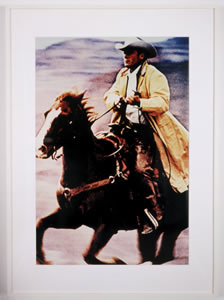 East/West employs the visual language of painting, photography and sculpture by an internationally acclaimed selection of contemporary artists to evoke a dialogue about the flattening world we currently inhabit. The works featured in this exhibition encourage the viewer to ponder the human condition in a global environment where technology has broken through barriers of culture, countries and continents, narrowing perceived gaps between countries and continents, near and far, outsider and insider, the individual and the collective. These artists from Asia, Europe and the United States address universal issues of identity, nationality, consumerism, politics and individuality with work that has been previously exhibited in museum shows and galleries around the world.

The exhibition is anchored by the oldest pieces, black and white images from The Americans by Swiss photographer Robert Frank. In 1955, Frank was commissioned by the John Simon Guggenheim foundation to travel the country for two years. As he put it, he wanted to create “an observation and record of what one naturalized American finds to see in the United States.” Using a hand-held Leica to capture America from his unique outsider perspective, Robert Frank created a renowned and highly influential body of work published in 1958 in France and in 1959 in the United States. Jack Kerouac, who wrote the introduction to the first American edition of The Americans, said of the Swiss photographer “…he sucked a sad poem right out of America onto film.” These iconic images created by a foreigner drew unprecedented focus on race, politics, religion and identity in America that resonates today.

Like several of the artists featured in East/West –American Scott Hug, Scotsman Douglas Gordon, and a collective, Bruce High Quality Foundation among them—Japanese artist Takashi Murakami’s work is influenced by American pop art and its godfather, Andy Warhol. As Warhol himself is quoted, “The pop artists did images that anybody walking down Broadway could recognize in a split second—comics, picnic tables, men’s trousers, celebrities, shower curtains, refrigerators, Coke bottles. All the great modern things that the Abstract Expressionists tried not to notice at all.”

Murakami, born in Tokyo, Japan, in 1962 and living and working in Asaka, Saitama, and Brooklyn, New York, is one of the most important and popular, as well as prolific, contemporary artists who happen to have come out of Asia but whose work transcends borders. With a doctorate from the Tokyo National University of Fine Arts and Music, Murakami is a standard bearer of the generation of artists whose visual vocabulary is steeped in popular culture. In his work he addresses the relationships between East and West, between high art and popular culture, between contemporary Manga and Anime style and traditional Japanese painting.

Richard Prince’s Cowboy series draws on idealized figures of the American West. Prince, a renowned American artist born in the Panama Canal Zone was an early adopter of appropriation, taking images from advertisements, in this case a Madison Avenue vision of exaggerated masculinity presented to promote cigarettes, and re-photographs them to make them his own. Working in the tear sheet department at Time magazine, he would end his day with the images from the advertisements that had appeared in the magazines owned by the Time-Life company. Of these found images Prince said, “Oceans without surfers, cowboys without Marlboros…Even though I’m aware of the classicism of the images, I seem to go after images that I don’t quite believe. And I try to re-present them even more unbelievably.”

As with Prince’s Cowboys, many of the works in East/West question the authenticity of mass media, branding and traditional notions of ownership of imagery and the role of the artist. Artists appropriate images that are possibly familiar from media and entertainment, layering text and slogans to offer social commentary as famed American conceptual artist Barbara Kruger does so effectively in Look For The Moment When Pride Becomes Contempt, borrowing titles as Jonathan Horowitz has done with his works, or in the case of French artist Cyprien Gaillard, superimposing the image of the Cleveland Indians’ smiling Native American onto a traditional landscape painting to make a point about the use of such a mascot.

The American Dollars that are the subject of Chinese artist Yan Pei-Ming’s work in this show highlight the influence of the US economy and culture in Asia and elsewhere. Yan Pei-Ming lives and works in France though he was born in Shanghai where his childhood was dominated by Mao’s Socialist Education Movement. His most famous paintings feature the image of the leader and his work addresses the public image of political figures such as the American Presidents on American Dollars. Though he prefers to use his visual language rather than spoken communication he has said in an interview, “I don’t want my paintings to speak in Chinese. My work is not ‘made in China’ and I don’t want it to speak that language. My paintings don’t need explanation. They just communicate; there is a universality to them.”

Like Yan Pei-Ming, Xing Danwen, one of few women yet to achieve a position of acclaim among Chinese contemporary artists was raised in an atmosphere of propaganda imagery. Her work focuses on the enormous upheavals being experienced in modern-day China and the use of and effects of technology on society and on the environment. She received a BFA from the Central Academy of Fine Arts, Beijing, and an MFA from the School of Visual Arts in New York. She is one of several artists featured in this exhibition who have studied and worked in countries other than their own. Korean Do Ho Suh studied at RISD and Yale after completing a master’s degree in oriental painting at Seoul National University. Momoyu Torimitsu came to New York from her native Japan to participate in the P.S.1 International Studio Program. Yan Pei-Ming attended the Ecole Nationale des Beaux-Arts in Dijon, France, where he continues to base himself while French citizen Cyprien Gaillard studied in Switzerland and lives and works in Berlin.

Regardless of where they were raised, studied or work now, all of the artists featured in this exhibition travel the globe and have been shown in galleries and museums around the world. Their works offer perspective about differences and similarities to an audience whose common language is a visual one. The connecting force between the pieces presented in East/West is perhaps summed up by one of the most illustrious American artists working today, Jeff Koons, whose iconic sculpture New Hoover Deluxe Shampoo Polishers carries on the Dada tradition of the ready-made by placing these existing consumer products, literally, on a pedestal. Koons says of art, “Art is about profundity. It’s about connecting to everything that it means to be alive, but you have to act.”