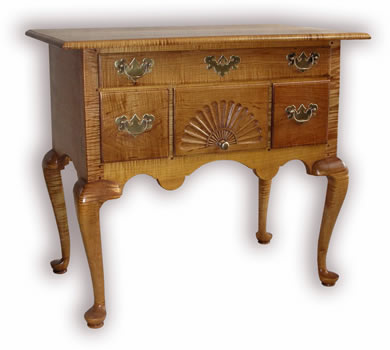 Woody Mosch is a master craftsman who has spent most of his career designing and handcrafting furniture and cabinetry in the traditional styles and construction techniques of the 18th and 19th century cabinetmakers. Most pieces are started with modern tools and finished with hand tools to replicate the look and feel of the originals.

His preference is to reproduce Queen Anne and Shaker styles, but his creativity and ingenuity allow him to construct whatever a client wishes. Through his skillful use of hand tools, he matches new paneling seamlessly to antique paneling and creates furniture convincingly similar to treasured antiques. He has great admiration for the simplicity of Shaker designs and has created many kitchen and bathroom cabinets in that style.

Woody’s work has appeared in numerous magazines and newspapers over the years, including Architectural Digest, House Beautiful, The New York Times, and the Litchfield County Times. His distinguished client base is largely in the east, but his work has been sent to Palm Beach, Jackson Hole, Santa Barbara, Chatham-MA, Sea Island-GA, a Colorado ranch, and residences in other areas. Various museums and galleries in Litchfield County have featured his work.

Woody’s expertise in fly-fishing, wing-shooting, and cooking brings an extra dimension to his kitchens and to cabinetry for fine sporting equipment.