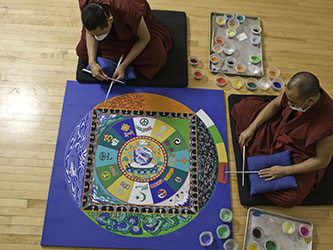 Observe the ancient practice of Tibetan sand mandala painting during the monks’ five-day visit to the Taft School. According to Tibetan tradition, the creation of a sand mandala – an ornate circular sand painting with ancient roots – effects purification and healing. We welcome you to once or as often as you wish to watch the beautiful design emerge and to experience the dismantling of the mandala at the closing ceremony on Friday, October 30, 2015. Please contact Robert Ganung, Chaplain, for times. 860-945-7803.

A) To make a contribution to world healing and peace by sharing unique Tibetan Buddhist teachings, sacred religious performances, chanting, and Tibet's unique identity treasures of culture and authentic traditions.

B) Recognizing well, and very deeply, that there have been great tragedies in every part of the world, we want to share our sympathy and prayers together with you as human beings sharing this planet and sharing the future of this home of ours.

C) To generate a greater awareness of the endangered Tibetan civilization and human rights abuses by the Communist Chinese since 1959. As the situation in Tibet is becoming more desperate by the day, due to massive displacement of Tibetans by Chinese citizens sent there by the Communist government, and ever new rules and difficulties, especially at the monasteries, we need your help now.

D) To raise support for the refugee monks' community in south India for proper food, improvement in health & hygiene and for providing better education facilities for the monk students. We preserve our tradition and culture.

Drepung Monastery was founded in 1416 near Lhasa, the capital of Tibet. Gomang Dratsang or College is the oldest of the 4 colleges of Drepung. In 1959, before the invasion of Communist China, Drepung Monastery had more than 10,000 monks. Since its beginning, Gomang College has produced many eminent Buddhist masters and has been a very important Tibetan and Buddhist learning center. The Sacred Art Tour is travelling throughout the United States for a year. It is sponsored by the Drepung Gomang Institute, the Monastery’s North American sister organization.