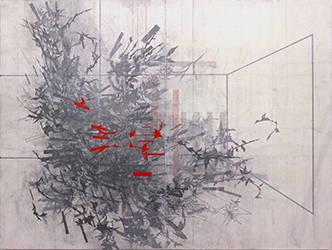 My work explores a hypothetical intersection between the natural world and our built environment. I am interested in the tenuous and temporary fit with which the things we have built have accommodated themselves to the fecund and ever-resurgent forces of the natural world within which they are sited. My pictures suggest landscapes captured in a state of flux, landscapes on the cusp or in the throes of explosive generation or devolution, they are geographies of entropy and zero-sum gain.

In his delicately layered pencil drawings, Detrani takes elements from the natural world and fuses them with our built environment. Merging the organic with the inorganic and the abstract with the figural, Detrani’s imagined landscapes are paradoxically frozen in a state of flux. His paintings and drawings depict botanical forms blending with fence-like structures and random architectural elements that hover in mid-air—everything feels as though it is either coming apart at the seams or is perhaps in the nascent stages of construction. Complete yet fragmentary, Detrani’s ambiguous compositions incorporate the structural language of poetry: They are built on the interplay of shapes and forms and the expressive capacity of color and line to speak about notions ranging from ephemerality and dislocation to unity and bliss.

The smooth surfaces of Geoffrey Detrani’s mixed-media works provide counterpoint to a world of complex visual information below. In graphite and ink, Detrani renders botanical images that spill across the picture plane. Pulsating with monochromatic energy. They are propelled or contained by structures: radiating lines, imaginary architecture, geometric solids painted in opaque acrylic. Some evidence of order appears in the form of stripes in the far background of several pieces. But this order is a fluid situation, as seen in the broken and twisted forms of faux-geographic maps that occupy various layers. As the real world order changes in countless aspects, the maps also represent new and unsettled boundaries. Shifts in belief systems alter human behavior – creating and destroying civilizations, affecting climatic and terrestrial event – and come back to haunt the people caught in the latest round of the eternal cycle of man vs. nature. And while nature will eventually win, Detrani’s works eloquently lay out the elements of this perpetual struggle.

This exhibit is made possible by the Andrew R. Heminway ’47 Endowment Fund.

In 2001, Mrs. Beverly Heminway established an endowment fund in memory of her husband, Andy. The income from this fund is used to support an annual art exhibit in the Mark W. Potter Gallery.

After attending Taft in the eighth and ninth grades, Andrew R. Heminway ’47 went on to Brooks School and Yale University (A.B.).Upon graduation from Yale, Andy served in the United States Army and planned to attend the Carnegie Institute of Technology to earn his degree in Print Management. Before matriculating into Carnegie Tech, he attended the Yale School of Art and studied with Josef Albers for one year. He valued that year beyond words and always remained a man in love with color and light. He married, attended and graduated from Carnegie Tech (B. S.), made a successful career in business, and raised a family in Middlebury. Upon retirement, Andy returned to his painting and his studies in the humanities. He earned a master's degree in English from Trinity College and began to paint in earnest. The Heminways sent two children to Taft, Mrs. Molly Moseley '77, and Mr. Merritt Heminway, '79. Andy died in November 1997.