Ginger O’Shea came to Taft in 2001, after a 19-year independent school coaching and teaching career. During her time here, she founded the girls’ varsity golf program, established a “Service through Sports” initiative that has become one of the most consistent service programs and Taft, and has built one of the strongest volleyball programs in New England. 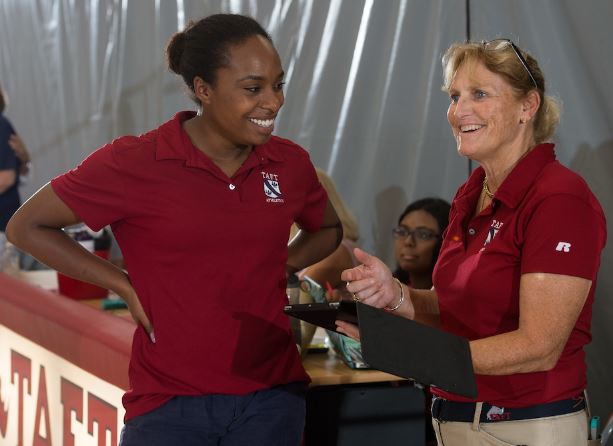 As a volleyball coach, O’Shea has a career winning record of 74 percent. Her teams have logged an impressive tournament record, with 14 New England Tournament appearances as quarter finalists, semi-finalists, and finalists. The team posted a 16-4 record during 2016 season, and was a New England Tournament finalist. O’Shea was the recipient of the Victory Club Award in 2010, celebrating her 400 career wins. She has also been recognized in Who’s Who Among America’s Teachers for her tremendous contributions to the athletic community.

Under O’Shea’s leadership, Taft started a girls’ golf team in 2006. Since that time, the team has enjoyed tremendous success on the links, in most years winning or placing second in the Founders League, and the Pippy O’Connor Independent School Girls’ Golf Classic. To date, the team enjoys an impressive record of 143-12-4.

O’Shea began her teaching and coaching career at Boca Raton Academy in Florida, where she coached volleyball, basketball, and softball. After five years in Florida, she moved to The Masters School in Dobbs Ferry, NY. She holds a M.A. from Columbia University, B.S. from Florida Atlantic University, and A.S. from Endicott College. She is CAP Level II Volleyball Coach and is a Member of the NY State Coaches Association Century Club. She is a member of many athletic organizations, including the American Volleyball Coaches Association, the USGA, and the USA Triathalon Association. She coordinated the New England Prep School Volleyball Tournament for four years and is the tournament director for the Pippy O'Connor Independent School Girls' Golf Classic.

O’Shea and her teams support a wide range of charities, and raise money and awareness for groups working to eradicate diabetes, leukemia, breast cancer, and colon cancer. O’Shea teaches psychology at Taft, and serves as an admissions officer.