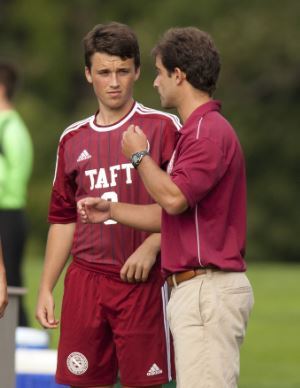 Oscar “Ozzie” Parente is an award-winning and widely respected coach, teacher, and den at Taft. Parente was recently named 2016 Connecticut Large Prep School Coach of the Year for his achievements as head coach of Taft’s boys’ varsity soccer team.

In his first four years as head coach, Parente compiled a 45-15-10 record. He led his teams to a Founders League Championship in 2016, and Class A New England Tournament berths in 2015 and 2016.

Parente holds a U.S. Soccer “E” coaching license, and is the Upper Mid Class Dean, a chemistry teacher, and an assistant basketball coach at Taft.

Statement by the Founders League Regarding Interscholastic Competition

In light of the COVID-10 pandemic and after many discussions prioritizing community health, safety, and well-being, The Founders League has unanimously, and with great regret, decided to cancel all Founders League interscholastic competition for the 2020 Fall season and the 2021 Winter season.