The Ongoing Work of Inclusion 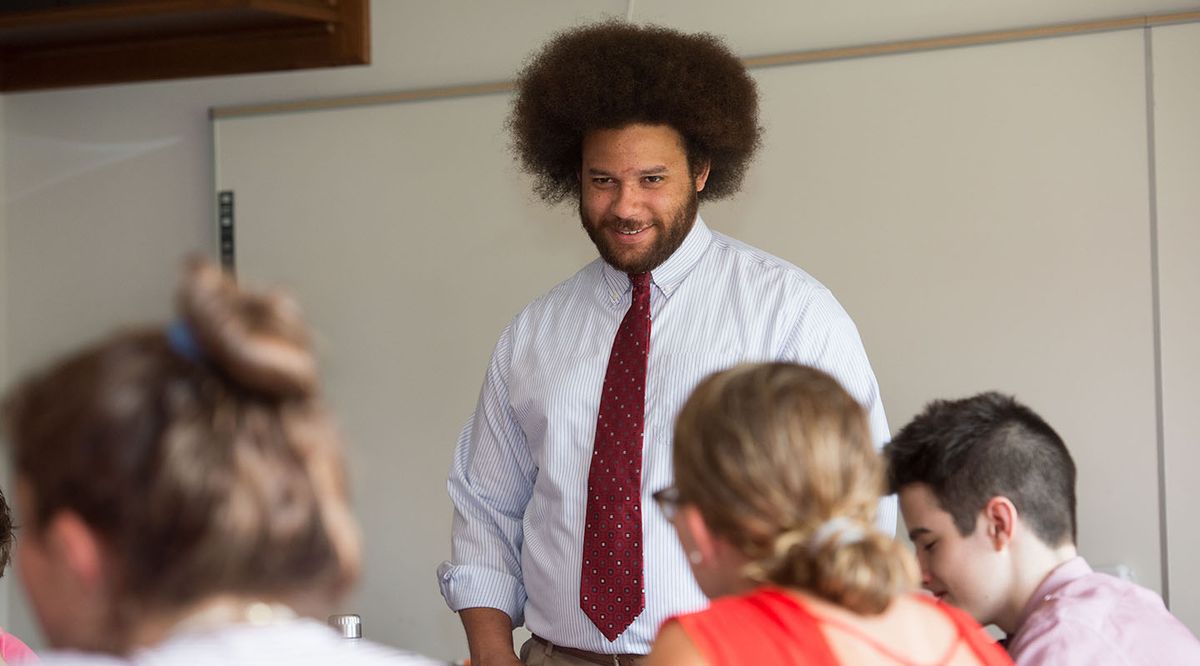 A Conversation with Andrew Prince, Dean of Multicultural Education

As dean of multicultural education, Andrew Prince is tasked with providing support and programming for the school community on areas related to race, ethnicity, sexual orientation, gender identity, religion, and class. In this role, he has taken up the work of others before him at Taft, working to make the school an inclusive and welcoming community. The Bulletin recently sat down with Prince to ask about his work and how it connects to the broader mission of the school.

Where did you grow up and go to school?

I was born in Alameda, California, though I spent my formative years in Alexandria and Arlington, Virginia, before my family settled in Oakland, California, which is still “home base.” I graduated from Bishop O’Dowd High School in Oakland before attending Harvard, where I earned my A.B. in political theory and minored in moral and political philosophy. Before coming to Taft, I attended Columbia’s Teachers College, where I completed the Private School Leadership program in the Klingenstein Center and earned my M.A.

What drew you to education and to Taft? What attracted you to diversity education in particular?

One of the major reasons that I became an educator is because I love learning and had a number of great educators in the course of my time as a student. They taught me essential truths that impact the way I live my daily life and fostered my curiosities in ways that have made me a “lifelong learner,” for which I am forever thankful. Second, I believe that a quality education ought to be a fundamental right of all Americans, as it is part of what we need for a relatively equal opportunity at success in life. Not all schools do the things I described above and not all learning happens in schools, but when I discovered places like Taft—where I could educate in the ways I was educated—I felt like it’s the work I had to be doing.

What I have come to learn is that everyone being at home and their full selves advantages everyone, including community members of traditionally privileged groups. That is, we learn from difference in ways that improve us and our productivity, but only when difference is fully present. If people do not feel at home and consequently are not fully themselves, then their experience will be compromised and the broader community will not benefit from the experiences and perspectives they have to share. So, this work is both a moral imperative and practically valuable, which makes it very rewarding.

Last year, two committees worked on developing a Diversity, Equity, and Inclusion (DEI) statement and on revising the Portrait of a Graduate. What prompted that work, and how have the DEI statement and revised POG been incorporated into the work of academic departments and other offices?

The instances of hate speech that occurred on campus last year and our broader societal conversations made it clear to us that we needed to define and clarify our positions on diversity, equity, and inclusion work. We wanted all current and future community members to very clearly understand the principles that undergird all of the work that we do at Taft. While I think most people likely could have stated the principles contained in both documents, the clear and public statement of those principles was and is a statement in and of itself. And members of the community continually infuse these principles into the fabric of the work we do. For example, we have put the DEI statement into practice by physically posting the statement and the revised Portrait of a Graduate in hallways and classrooms. French classes have translated the document while discussing the language contained within. Science classes have considered “who is a scientist,” with the idea of breaking down preconceptions of who can and cannot take up scientific inquiry.

What do you see as the biggest challenges in your role as dean of multicultural education?

One of the biggest challenges in my role is that there is so much shame involved in making mistakes around DEI work. We never want to make mistakes—particularly those that have to do with important parts of people’s identities and “core identifiers,” including age, race, religion, ability, gender, sexual orientation, ethnicity, and socioeconomic status—and, of course, we should always strive to avoid such errors and offenses. But making mistakes, having them pointed out to us, and making the necessary corrections is the way we learn and grow. That is, those mistakes provide opportunities for people to improve, and part of my challenge is helping people let go of their shame and instead commit to doing better.

You have worked with other faculty members and students to develop a number of affinity groups for students. What types of groups currently exist, and how do they help further diversity, equity, and inclusion work at Taft?

We currently have affinity groups based on race, gender, and sexual orientation, and I am hoping we will expand those offerings to include class, family structures, and ability. These groups offer a space for folks of a similar identity to come together and have frank and honest discussions while also enjoying each other’s company. For groups that focus on a traditionally marginalized identities, it allows members of these groups to talk with each other openly and without fear of skepticism or misunderstanding by people who are not of that identity. And for community members who are a numerical minority in the Taft community, it offers an opportunity to see each other more than they might otherwise. For community members of traditionally privileged groups, it provides an opportunity to talk through some of the privileges we have, how we feel about those privileges, and to work to help traditionally marginalized people. As a man, for example, I need to work to understand the privileges of my gender and help more men do the same in order to work effectively to support women in the work that they do to overcome the systemic oppression they face.

What special speakers or programming has Taft taken on in the past couple of years to address issues of inclusion and multicultural education? How is the faculty supported in this work?

We’ve increased the number of affinity groups and the frequency with which they meet, increased the number of conferences that all community members have access to and attend, connected students to alumni of similar identities with more frequency, and ensured that students of traditionally marginalized groups are supported in all ways that we can imagine—anything from celebrating relevant holidays to ensuring access to familiar foods. One of the things that we have done specifically for faculty is the creation of a DEI book club where faculty are invited to read a book and discuss it in groups with the hopes of raising our awareness and competencies. So far, we have read Debby Irving’s Waking Up White, Kevin Jennings’ One Teacher in Ten – LGBT Educators Share Their Stories, and Anne Fadiman’s The Spirit Catches You and You Fall Down. All of this is with the hopes of both supporting community members of traditionally marginalized groups and educating all community members around DEI.

What do you enjoy most at Taft?

I’m going to give you two answers. First, I love that Taft allows and requires me to educate students in a number of different ways and places in school life. While teaching in the classroom is important, I believe that is just one of the many places that we can educate students. We are teaching in the hallways, the weight room, the athletic fields, common rooms, the dorms, and beyond, and there are any number of different lessons that we can teach. Whether it’s how to negotiate a conflict with a peer in a class, how to understand across difference in the dorm, or how to deal with failure in an athletic setting, at Taft we get to teach all the time, and I thoroughly enjoy it.

Regarding DEI work, I really appreciate the opportunities I have to collaborate with thoughtful and engaged community members. When I arrived on campus to interview, it was clear to me that Taft was serious about the school’s commitment to ensure that all people, no matter their background, feel at home. I was taken with the idea that I would be able to collaborate with any number of different folks—students, parents, faculty, staff, alumni, trustees—and that is certainly the way that things have turned out. I have had the privilege of both working with colleagues on long-standing projects like our work on MLK Day, and collaborating with others on new undertakings like our students who took up various projects after attending the national Student Diversity Leadership Conference this past year. All of this to say, I get to fit into a tradition of working to ensure that everyone feels at home at Taft with a number of caring and capable community members.

Taft is an intentionally diverse institution whose members work to acknowledge, respect, and empathize with people of all different identifiers, such as race, socioeconomic status, gender identity and expression, education, age, ability, ethnicity, culture, sexual orientation, language, nationality, and religion. We foster these habits and dispositions in accordance with Taft’s mission to educate the whole student, thus preparing individuals morally and pragmatically for global citizenship. As such, community members commit to participate in and support ongoing equity and inclusion programming through curricular and co-curricular offerings, professional development, residential life, and local and global partnerships. Moreover, members of the Taft community strive to understand and combat the symptoms and causes of systematic oppression—ranging from implicit biases to microaggressions to discriminatory policies, practices, and traditions—that benefit privileged groups and disadvantage marginalized groups. While at Taft and beyond, community members commit to affirm and honor the lived experiences of others, to willingly challenge inherited beliefs and ideologies, and consequently learn, grow, and serve.