Menu
No post to display.
Burning Brightly in Rio 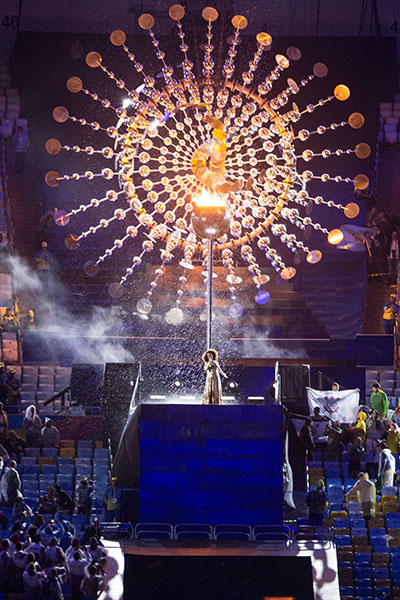 This cauldron burns the brightest—if you can take the heat.

Be forewarned, it’s melted the best-laid plans, from a hydraulic fail in Vancouver to a singed dove in Seoul.

But this inferno has forged its share of transcendent showstoppers: Muhammad Ali in Atlanta, an archer in Barcelona, and a Peter Pan-like high-wire act in Beijing.

And now Rio, where sculptor Anthony Howe ’73 ensured his place in Olympics lore this summer with his scintillating twist on the focal point of the Games, the cauldron. The 61-year-old designed the kinetic sculpture that for 17 days in August provided a resplendent backdrop for the flame with its kaleidoscope effect.

No pressure—only 26.5 million viewers tuned in to the opening ceremony on NBC. “I was sobbing when they lit it,” Howe says. “I had about three cameras in my face.”

The cauldron lighting culminated a yearlong project, from visualizing a dozen design concepts to shipping the 6,000- pound, 40-foot-diameter aluminum, fiberglass, and chrome finished sculpture from a prefabrication facility in Montreal to Rio. Howe was recruited for the oncein-a-lifetime assignment by Marco Balich, the ceremony’s executive producer. He collaborated on the design with the show’s creative director, Fernando Meirelles.

“Fernando said he wanted to do something that resembled the sun,” says Howe, who lives on Orcas Island, Washington, in the San Juan Islands. “The emphasis on everything was to get it as shiny as possible to better reflect the light of the flame.”

In contrast to previous Olympic Games and in a nod to the environment, global warming-minded organizers eschewed a massive flame inside Maracanã Stadium.

The thrust of the whole thing was to have a very small flame,” Howe says. “They wanted to use as little gas as possible.” 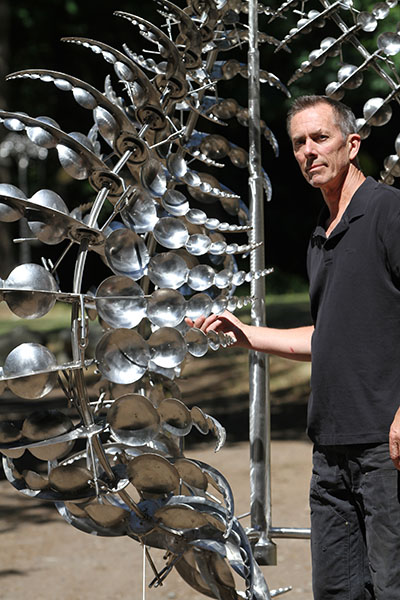 A team of artisans started assembling the sculpture under Howe’s direction in the spring. It was dismantled and put into crates for the 5,000-mile journey to Rio, where Howe’s pièce de résistance was put back together in July.

“Everything had to happen pretty fast,” says Howe, who flew with his family to Brazil in early August to watch a rehearsal of the lighting.

Life has indeed imitated art for Howe—it’s kinetic. He started out as a painter, drawing inspiration from the late Mark Potter ’48 in the art studio at Taft. It wasn’t until Howe moved to Chelsea in New York City that he bought a welder and started making things with steel. He stretched two elevator cables between buildings and started hanging his sculptures.

Now, they grace prime real estate, from the Dolomites in Italy and beachfront promenade in Dubai, to palaces and the store window of Barneys in New York. Many of them have names. Rio was a notable exception.

“The inspiration is always the piece itself,” says Howe, who is married with a son in college. “There is no other inspiration.”

Appearances can be deceiving, however.

“It’s not powered by heat,” Howe says. “The New York Times printed that it was wind-powered. That was pretty funny. It did have motors. “You don’t want to leave that to chance,” Howe says. “Is the wind blowing enough to power it?”