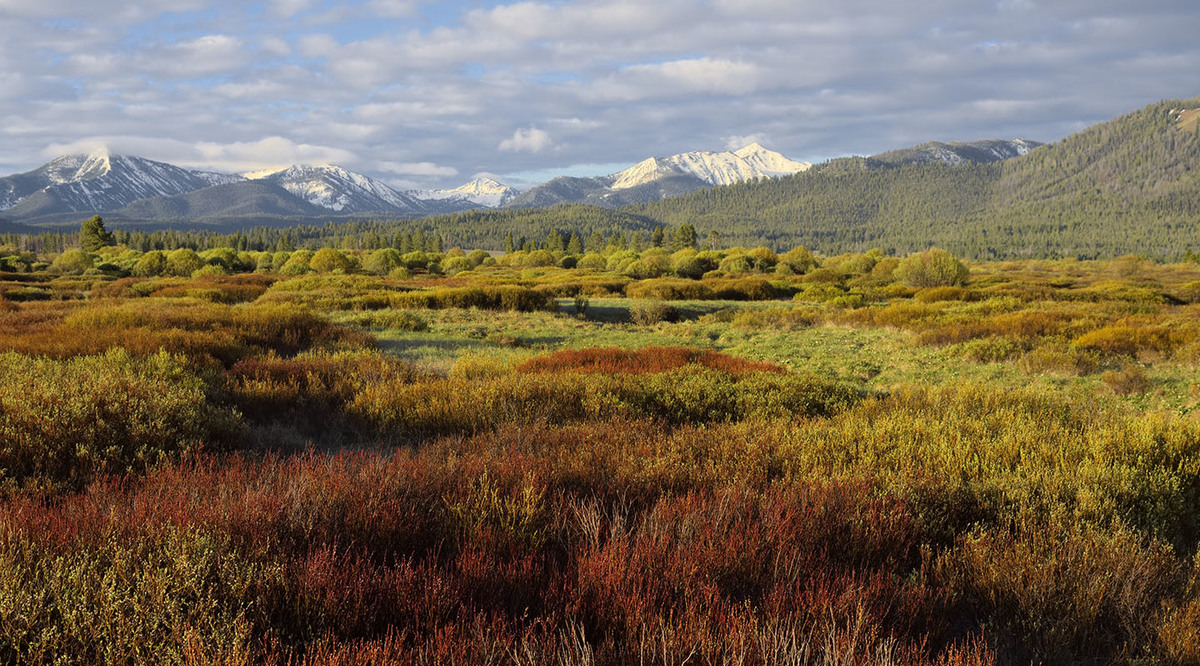 "Environmental issues have long been a punching bag for politicians, especially in the West," Jonathan Oppenheimer '92 says, "but we believe that we can support development while also preserving our core environmental values."

For Boise resident Jonathan Oppenheimer '92, most days begin much the same: he enjoys breakfast with his wife and daughters, then steps out the door for a four-mile ride along a greenbelt path on the banks of the Boise River to his office at the Idaho Conservation League. "In the fall and winter months, I make the trip in a rather tired, 25-year-old pair of bike pants, which my coworkers love to tease me about," he says with a chuckle, "but I don't mind. I love being outdoors, and the ride is a relaxing way to start my day." 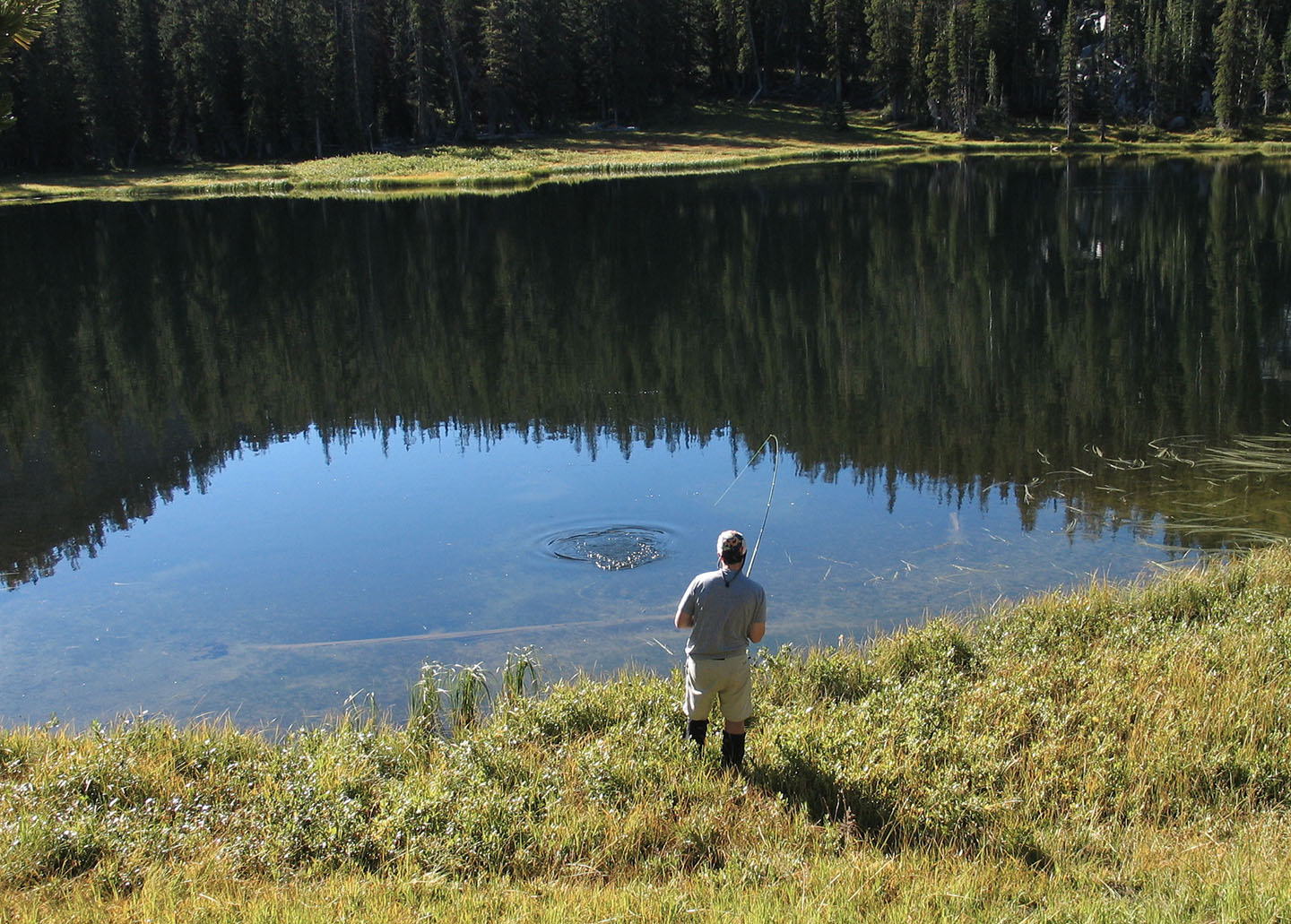 Such is the rhythm of Oppenheimer's life for nine months of each year. But this leisurely pace goes by the wayside for the three months that the Idaho legislature is in session. During this intense period, Oppenheimer is out the door ahead of the family, his days consumed by his duties as the Conservation League's government relations director, a post that affords him plentiful opportunities to contribute to the "conservation conversation."

"Idahoans, myself included, have a close connection to the land. I'm outdoors as much as possible. I can hit a trail or trout stream and be the only person around. It's phenomenal."

As the state's leading voice for conservation, Oppenheimer's organization monitors mining, logging, recreation management, and wildlife management to ensure that resources are managed responsibly, and also works to maintain clean air and water across Idaho. "There are always a handful of issues that we're working on at any given time," says Oppenheimer, "but mining, fire, and open space are three of the biggest." Mining is a major source of revenue in the state, but mine development is also a major source of pollution, he explains, so the League monitors water quality to ensure that health and safety aren't compromised in pursuit of commerce. Fire is another focus for the group, with the threat of wildfires a special concern in the summer months. "We're monitoring everything from community development to fuels reduction on state, private, and federal lands," he says. Finally, nothing could be accomplished without successful collaboration between the League and the community's stakeholders, from the timber industry and corporate developers to Fish & Game officials and private citizens.

Oppenheimer concedes that this aspect of his job isn't always easy. "Idaho is a conservative state, so it can be challenging to talk about conservation issues, but finding a way to disagree without being disagreeable is a hallmark of our organization." Conservation and conservative come from the same root, he points out, and working for alignment between the two perspectives is a goal to which he is deeply committed. 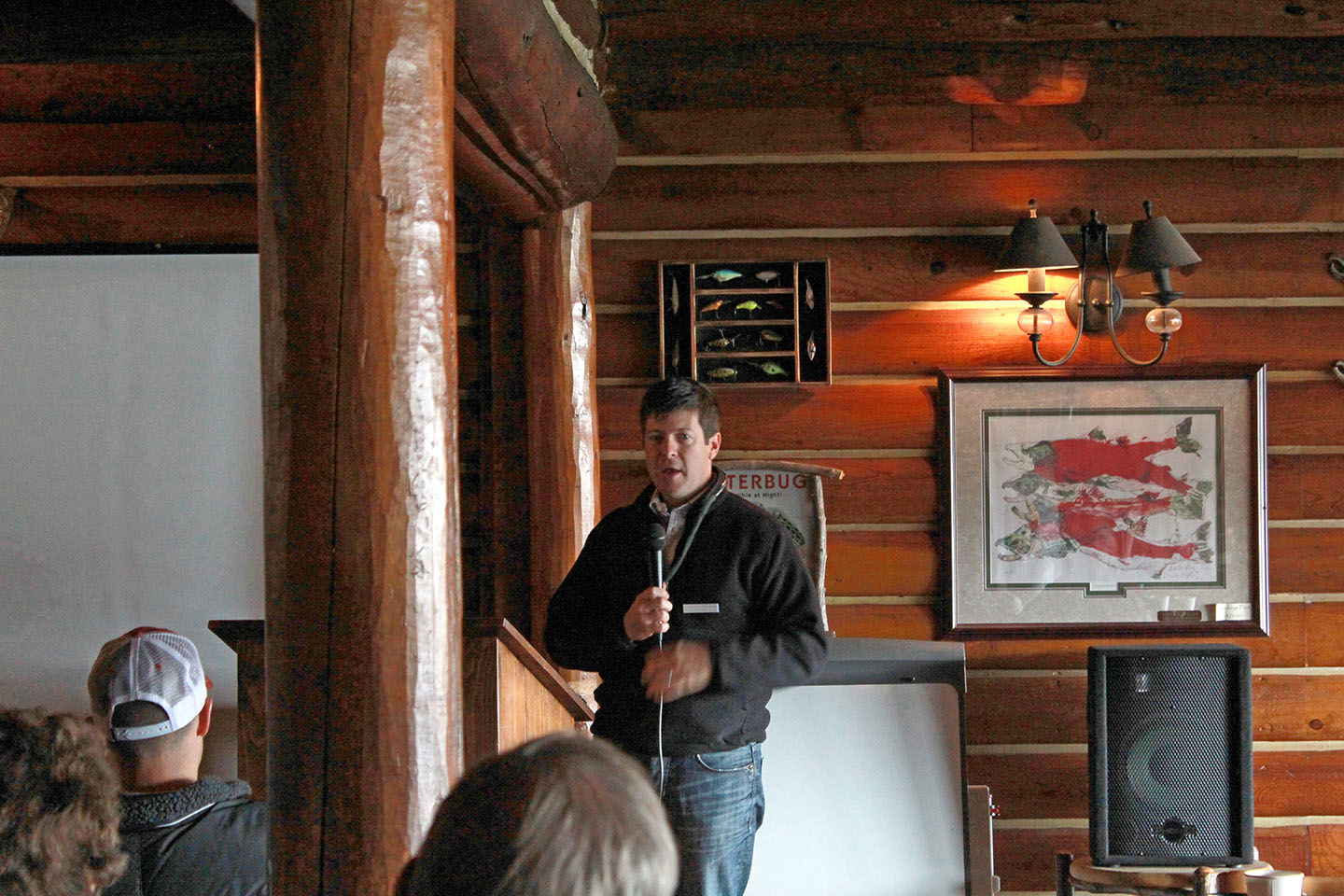 And for the three months of each year that the legislature is in session, Oppenheimer and his team have a bit of a bully pulpit. During this period, he dons his lobbying hat and shuttles from one meeting to the next, discussing development of new legislation, attending and testifying at committee hearings, developing action alerts that League members can use to correspond with their elected leaders, and collaborating with other parties whose interests are deeply intertwined with the League's. Efforts hardly lag outside the legislative session—Oppenheimer and his team continue to meet with state policy leaders, attend interim committee meetings, monitor land management activities, conduct public outreach, collaborate with community stakeholders, develop organizational policy, and manage litigation.

"There are many places here that look the same as they did in the early 1800s when Lewis and Clark were exploring the region. These regions have intact ecosystems, areas that function as they did 10,000 years ago, which is incredibly rare in this day and age when we're witnessing the disappearance of grasslands, redwood forests, and the like."

Oppenheimer has been with the League since 2002, starting as the North Idaho conservation associate and working his way up to senior conservation associate, a post he held until several months ago when he moved into the government relations director's position. But his bona fides in conservation stretch back to his first job out of college. After earning a bachelor's degree in forestry-resource conservation at the University of Montana, Oppenheimer joined Montana's Predator Conservation Alliance, cataloguing the conditions of unmapped forest roads in grizzly bear and elk habitat.

The job was not without its hazards. In one instance, Oppenheimer and a colleague (the late Charlie Blumenstein '92) found themselves with two flat tires some 15 miles from the nearest pavement. Fortunately, the pair stumbled upon a radio at a Forest Service helicopter firefighting encampment and were able to call for a tow truck. Oppenheimer then spent a year with the Riparian Wetland Research Program in Missoula, studying the effects of cattle grazing on private, Forest Service, and Bureau of Land Management (BLM) riverside lands. "One day I was chased by a bull moose," he recalls. "Luckily, I was able to tuck under a fence and escape harm. I never saw where the moose went, and I didn't wait around to find out!" After a few years of adventure, Oppenheimer headed east to Washington, D.C., to join the Forest Campaign of the government watchdog group Taxpayers for Common Sense. Five years later, however, the opportunity to play a role in an active conservation team drew him back west once more. 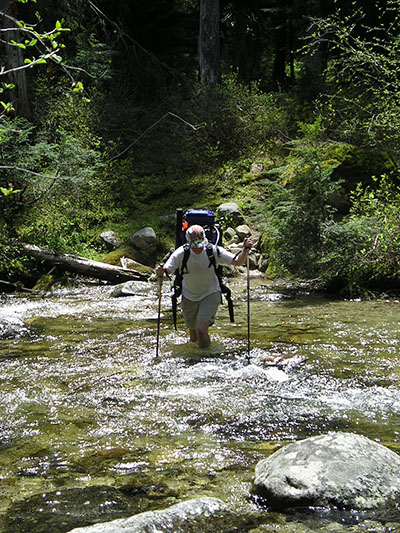 After so many years in the field, Oppenheimer concedes that it's hard to pinpoint when he first became interested in environmental issues. "I've had a strong connection to the outdoors and the natural environment since I was a kid." An Ohio native, Oppenheimer moved to northeastern Connecticut at the age of 11 and fondly recalls a childhood filled with field trips and summer camps. "Environmental studies are a longstanding interest. I've always been intrigued by public interest and environmental health issues. It's a natural fit that I've just never questioned," he says

Idaho is the perfect venue for his interests, Oppenheimer continues. It represents a vestige of what America once was, and at the same time serves as an outstanding example of the way in which the best landscapes and watersheds can be preserved while responsible economic development is encouraged. Approximately 63 percent of the state's land is public, encompassing national forests and BLM acreage, he notes, and residents feel a deep connection to their natural heritage. "Idaho has millions of acres, which represent incredible wild land value. There are many places here that look the same as they did in the early 1800s when Lewis and Clark were exploring the region. These regions have intact ecosystems, areas that function as they did 10,000 years ago, which is incredibly rare in this day and age when we're witnessing the disappearance of grasslands, redwood forests, and the like."

Despite this abundance, Oppenheimer remains vigilant, keenly aware that there are many stakeholders in the mix, each with an agenda. Among his greatest concerns at the moment: the issue of public versus private land ownership. "At present there's a big backlash against land ownership by the federal government. Public lands are a large part of the community in Idaho—fishing the evening rise on the Boise River, hunting in the state's wildlife management areas—outdoor activities are an integral part of life here." Yet there are some, Oppenheimer says, who wish to sell public lands into private ownership, a move that he vehemently opposes. The air we breathe and the water we drink are all interconnected and belong to everyone, Oppenheimer contends, making preservation of these wild spaces as important to those in other parts of the country as it is to the residents of Idaho. "This attempt to make public lands private is a significant assault on the rights of citizens to enjoy the amazing landscapes we have here in Idaho," he asserts. "It's very troubling to me to witness this ploy—and it is a ploy—to seize lands and turn them over to the state for auctioning off to the highest bidder. It strikes at the heart of what it means to be an Idahoan and an American."

Oppenheimer speaks as one who takes this birthright very seriously. A passionate outdoorsman, he avails himself of all that his state has to offer, from hiking and backcountry fly-fishing to predawn pickup games of ice hockey. Yet he also recognizes the necessity of economic development. "Environmental issues have long been a punching bag for politicians, especially in the West," he says, "but we believe that we can support development while also preserving our core environmental values.

"Idaho is a wonderful place to live," Oppenheimer concludes. "My wife and I moved out here, and before we knew it my sister, my mother, and my in-laws were here as well!" Boise sits at an elevation of approximately 3,000 feet and enjoys a high desert climate, he notes happily, which results in over 300 days of sunshine per year, mild winters, and little precipitation. "Idahoans, myself included, have a close connection to the land. I'm outdoors as much as possible. I can hit a trail or trout stream and be the only person around. It's phenomenal." 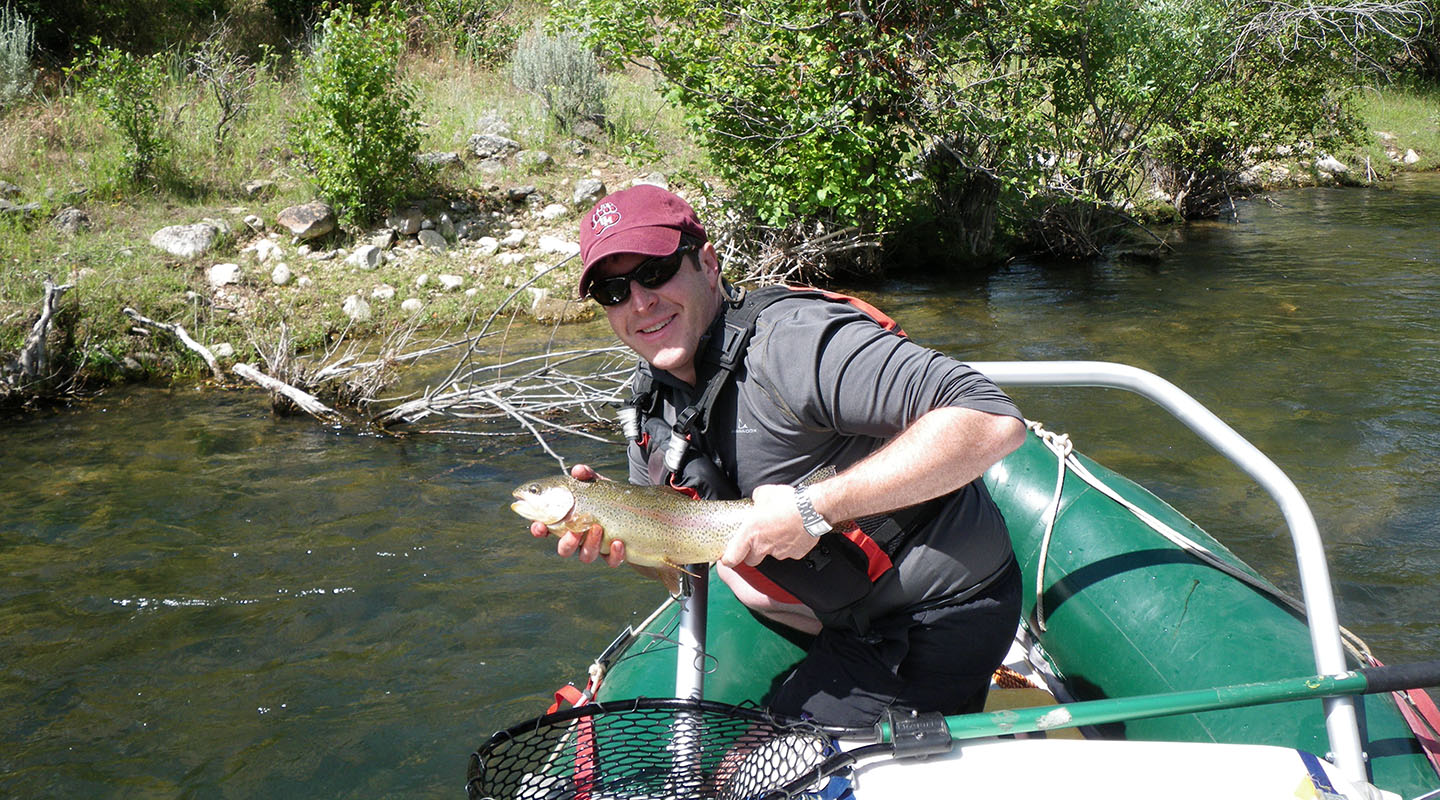 Lori Ferguson is a freelance writer based in southern New Hampshire.