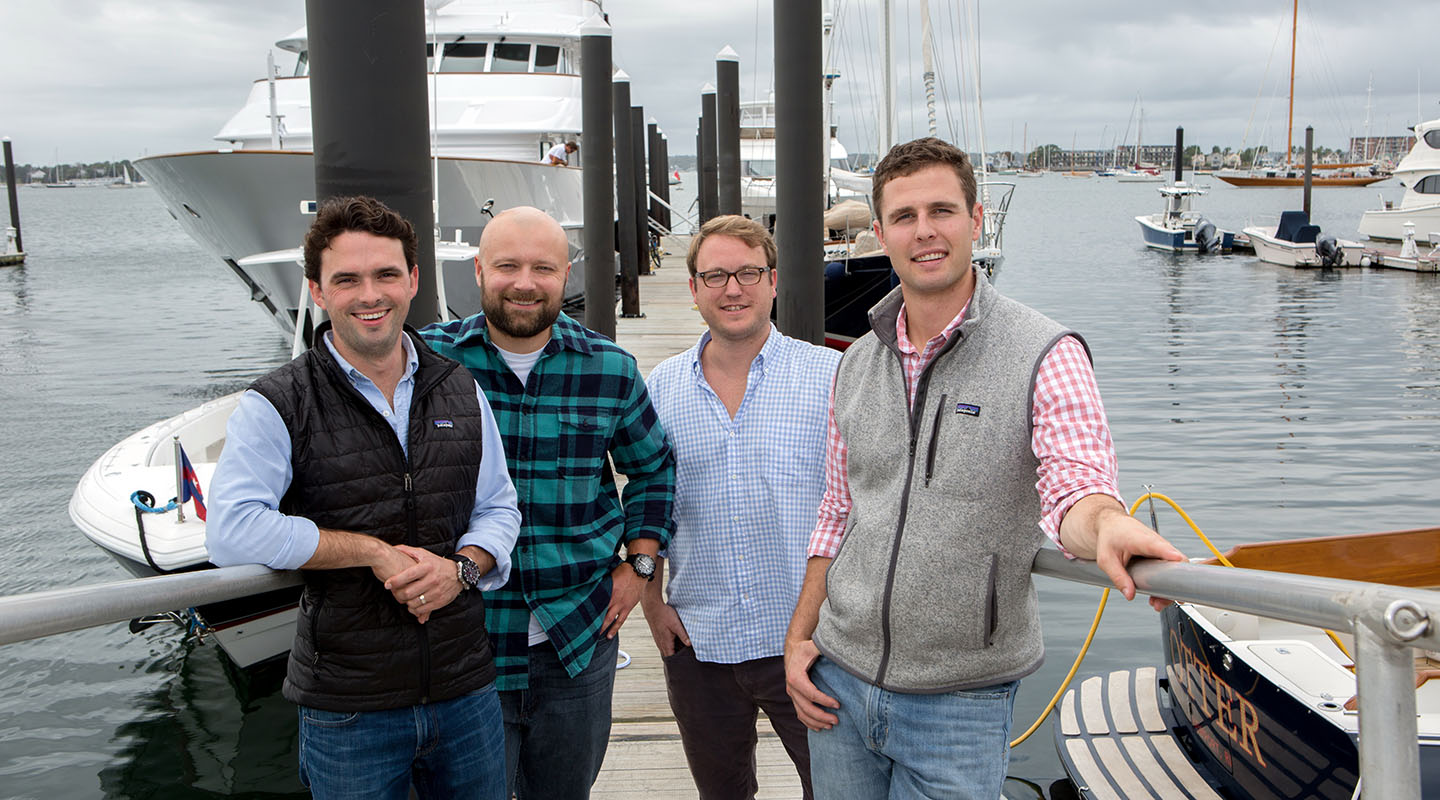 Tyler Kneisel ’99 built a lifetime of happy memories on the water. Now he has built a business there.

“I grew up sailing with my grandfather in Manchester-by-the-Sea, on Cape Ann, in Massachusetts,” says Kneisel. “Most of the boating I do now is on center consoles, playing in the waters around Cape Ann.”

A few summers back, Kneisel and his wife were enjoying time on the water. When evening came, they began looking for a mooring in a local harbor. None were available, and, in the age of digital concierge services like OpenTable, there was no readily apparent way to book a mooring in advance.

“It made me reflect on some past experiences I’d had cruising with my father,” Kneisel explains. In one particular instance a marina actually asked him to fax a request for a mooring and to wait for a mailed response. “I became incredibly curious about whether marinas still actually made people do this. I mean, it was 2013 after all. And that was the rabbit hole I went down.”

As an MBA with a rewarding career in finance, Kneisel’s journey down the rabbit hole was one of informed analysis and refined business acumen fueled by wholehearted passion. He emerged a year and a half later with the launch of DockHop, a web and mobile-based marketplace that allowed boaters to find and book slips and moorings directly from their smartphones. The boating market was more than ready for the much-needed service. But as Kneisel soon learned, there was another company also working hard to meet that need.

“I launched DockHop in December of 2014, and within two weeks I read the news about Dockwa’s launch in BostInno,” Kneisel says. “We had both been in stealth mode until that point, so neither of us was aware of the other. It was quite a shock to say the least, but also somewhat validating.”

Both companies were based in New England, and both were in their first year of operation.

“Mike Melillo and Matt Fradette, two of the Dockwa founders, sent me an email about meeting up at the New England Boat Show,” says Kneisel. “We met, had a beer, and we realized that we had shared ambitions that extended far beyond the waters of New England. I was farther ahead on product, but they had assembled a really incredible core team, including the third cofounder, John Nagro, a whiz of an engineer from HubSpot.”

The four agreed to merge their start-ups.

“We looked at the opportunity to join forces rather than compete head-to-head in our first year of operation,” Fradette told BostInno in 2015. The DockHop technology, he said, would expedite overall product development, while DockHop’s network of participating marinas would increase Dockwa’s “national footprint overnight.”

“I think what further helped cement the deal was that there was a natural fit for the roles we each wanted to play,” says Kneisel. “Prior to business school I worked directly for an incredible COO, Bill Miller, at Makena Capital. I loved Bill. Everyone at Makena loved Bill. They always say you know you are on the right career path when you covet your boss’s job, so moving from CEO to COO just made a lot of sense to me.”

The four cofounders officially launched the new Dockwa in May 2015 at Nantucket’s Figawi, one of the premier sailboat races on the East Coast. Later that month the company announced that it had closed a $1.1 million seed-funding round from HubSpot CEO Brian Halligan and CMO Mike Volpe, David Skok of Matrix Partners, and Driftt cofounder Elias Torres, along with several other private investors. That round brought the total financing Dockwa had raised to $1.4 million.

Today, tens of thousands of boaters find, reserve, and pay for moorings in real time, using the award-winning Dockwa platform on their computers or the free mobile app. Marinas use the platform to collect payment, manage reservations, and more intelligently optimize their occupancy. Dockwa’s marina network has expanded well beyond New England, with bookable slips up and down the eastern seaboard, throughout the Caribbean, on the Great Lakes, and on the West Coast, including marinas in San Francisco and Washington. They have offices in Cambridge, Massachusetts, and Newport, Rhode Island, and have doubled their workforce. In January, Dockwa acquired Marinas.com, an online marine directory of more than 75,000 marine locations and more than 100,000 users.

“While our focus with Dockwa has been intensely honed on transient business at marinas, Marinas.com brings an opportunity to more broadly address a lot of other facets of the marine industry that could use a boost into the 21st century,” Kneisel explains. “I don’t want to give away too much, but we believe the potential opportunity for Marinas.com is enormous.”

Whatever lies ahead, Kneisel says, Dockwa owes to the team that is continually moving the company forward.

“I think my greatest takeaway as an entrepreneur is that it really all comes down to execution. Developing an innovative idea and creating a product that achieves product-market fit are certainly important, but without the right people to execute, that idea is almost certain to fail. We’ve surrounded ourselves with a group of really talented and genuinely great people that care about each other. That sounds cheesy, but the start-up grind is relentless, and without having people that are there to pick you up and/or carry the load, I know we wouldn’t be where we are today.” j

To learn more about Dockwa, Kneisel, and his cofounders, or to book a mooring, visit dockwa.com