CHRISTOPHER EANES ’94 can pinpoint the exact moment when he took his first steps toward a career in music.

“I still remember the minute my life changed,” he recalls. “Christopher Shepard, Taft’s choral director at the time, came to our hallway in HDT and was recruiting singers from the choir. I just put my name down.”

From there, Eanes went on not only to join Collegium Musicum, but he also sang in the a cappella group, Oriocos, performed in a production of West Side Story, and undertook an Independent Studies Project in composition.

Now, more than two decades after that pivotal time, it’s no surprise that Eanes— who holds both a bachelor’s in music performance from Occidental College and a doctorate in music arts from the University of Southern California—is the artistic director and CEO of the Cincinnati Boychoir. 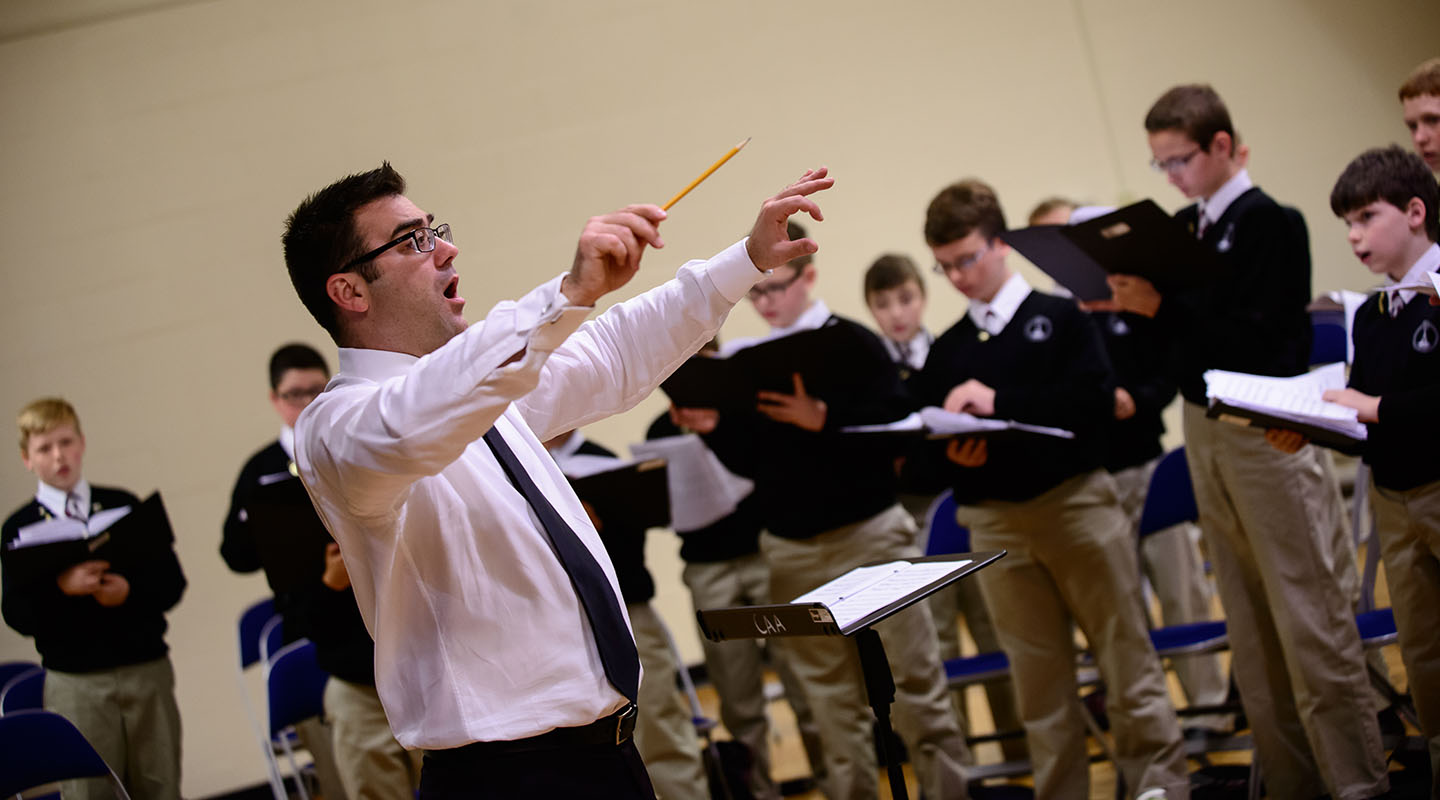 Comprised of nearly 200 boys ranging from kindergarten to high school age, the Cincinnati Boychoir was founded as the Cincinnati All-City Boys Choir in 1965. Eanes assumed directorship in 2009 and soon discovered that the 45-year-old ensemble desperately needed to adapt its mission.

“When I took over, it was still a relatively parochial organization singing quite a bit of sacred music,” he says. “I recognized that if the organization was going to survive, we had to change course.” Since then, Eanes, along with his wife, Managing Artistic Director KellyAnn Nelson, has grown the group into an organization that uses music as an important teaching tool.

“We work to foster core values in the boys—for both their personal development and their relationship with the broader community,” he says. “We are very different than what you might think of when you think of a boy choir. We will always be grounded in the Western musical canon, but really, our repertoire is anything that is going to inspire the boys to love the music that they’re performing and become more empathetic people.

“We have developed a cultural curriculum for our singers,” Eanes adds, “and we work in three-year cycles that explore music beyond our immediate world.” To do this, the Boychoir concerts focus on music from different cultures, and the group brings in special guest teachers and conductors and travels extensively.

“Many conventional choirs will present a ‘world music’ concert,” he notes, “and they sing music from all around the world. But it doesn’t go much beyond that. We choose to do a much deeper dive.”

The ensemble recently completed a study of the music of black culture in the United States, which included performances not only in cities with important ties to the U.S. civil rights movement, but also in South Africa. “We spent an entire year looking at apartheid and the music that came out of that period in history,” he says, “and when we were actually in South Africa, we dug even deeper.”

The group’s current cycle focuses on the Hispanic world. “We’ll be traveling to places where Hispanic cultures are prominent, discussing issues of immigration to the United States, of course, performing music from all over the Hispanic world,” Eanes says. “It’s such an incredibly rich musical environment, but it’s also a way of bridging the cultural divides that exist here in Cincinnati.”

Aside from the Boychoir, Eanes keeps busy with other musical pursuits. He is the artistic director of Collegium Cincinnati—a fully professional choral-orchestral ensemble that performs both Baroque music and contemporary compositions—and lately he has been working with researchers at the Cincinnati Children’s Hospital Department of Pediatric Otolaryngology on a study of the male changing voice. “I was talking with a doctor about how the research into the male changing singing voice was not really supporting what my own experiences were showing,” he says, “so we asked a bunch of boys from the Boychoir if they wanted to enroll in this study. Thirty or 40 of them went in at various stages in their vocal development to be examined. We’ve been able to collect a lot of data on healthy male singing voices in various stages of the voice change that we can analyze and eventually publish.”

In everything he does, Eanes strives to share his passion for both music and education. “I love that right now I have a teaching job that’s also in a professional musical environment,” he says. “It’s such a great balance.”