PETE ALEXANDER ’94 has something in common with the animals he researches: Like cougars, he pursues his prey, following them up mountains and through canyons in Wyoming. Unlike the big cats, though, Alexander is studying, not stalking.

Cougars are the widest-ranging feline in the Americas, with their territories stretching from the Canadian Yukon to Patagonia in South America. And they are the most populous of the large cats (cougars and jaguars) in the Americas. Though more closely related to the house cat, cougars are nearapex predators, silently stalking their prey before leaping and crushing the spines of animals as diverse as deer and livestock.

What he’s been doing lately is figuring out ways to monitor the cougar population in the Jackson Hole, Wyoming, area. As a research biologist with Craighead Beringia South, a wildlife research and education institute dedicated to conserving the natural environment, he’s developing noninvasive ways to keep tabs on the local cougar population.

Traditional ways of tracking cougar populations involve sedating individual cats and placing radio collars on them, a process that’s difficult for both the animals and the researchers. 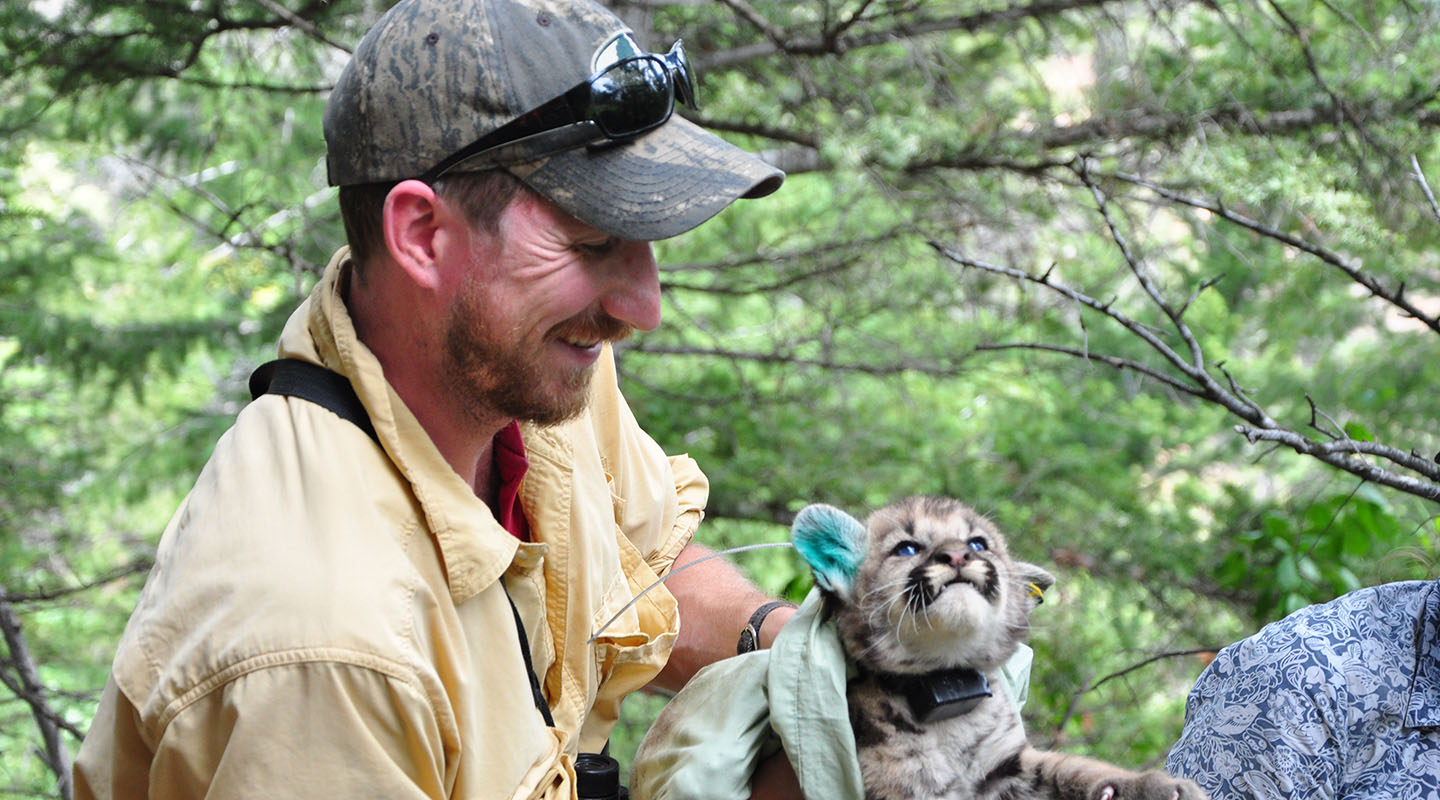 “Almost all the research I was doing when I first joined the study was with radio collars,” Alexander says. “It’s a ton of work, but it’s just such an adventure. You use trailing hounds, then chase them up the tree, sedate them, get them out of the trees, and put the collars on them. You track the animal and find out all kinds of things,” such as location clusters and when the animals enter and leave an area, thanks to data sent by the radio collars.

The problems include the price of each collar—radio collars are very expensive, $4,000 to $5,000 each—and the stress on the animals from being sedated and examined.

Alternatives such as camera traps are also used, but often researchers end up with very little good data because cougars are so secretive. Getting a good shot of a cougar takes time and patience. And often the results aren’t worth it, Alexander says.

“It doesn’t work and it’s really dangerous to rely on the camera method to get reliable data on a population,” he says. “A method we’re testing is using facial recognition software.”

The biggest problem with camera traps is that it’s really difficult to tell individual cougars apart, he says. “But you need to be able to identify individuals to get reliable population numbers, so that’s why we’re trying the facial recognition.”

But there are other ways of monitoring both individual cougars and a larger population: scat analysis. Alexander is developing ways to monitor the animals by testing the DNA left behind in their scat.

“It’s a lot less invasive, and you don’t have to harass the animal to get the data,” he says. By checking the genetic material left behind, “it’s pretty amazing what you can pull off…you know for sure that Cougar A left this scat, and Cougar B left it over there.”

The challenge with this method is finding the scat, and Alexander and his team would love to be able to get a conservation “sniffer” dog trained to hunt cougar scat. Similar to drug- or bomb-sniffing dogs, conservation dogs can lead scientists to piles of scat left by different animals.

“We’re hoping to get our own dog and train that dog on cougars and other species so we can refine that method and come up with best practices,” he adds. “It’s a lot of work. We need to find some funding to hire some help and a trainer who can work with us. Funding is an issue.”

“I like hiking in the woods with a goal,” he says, “not just to go on the tops of the mountains, but to go find out some secret information no one else has.”