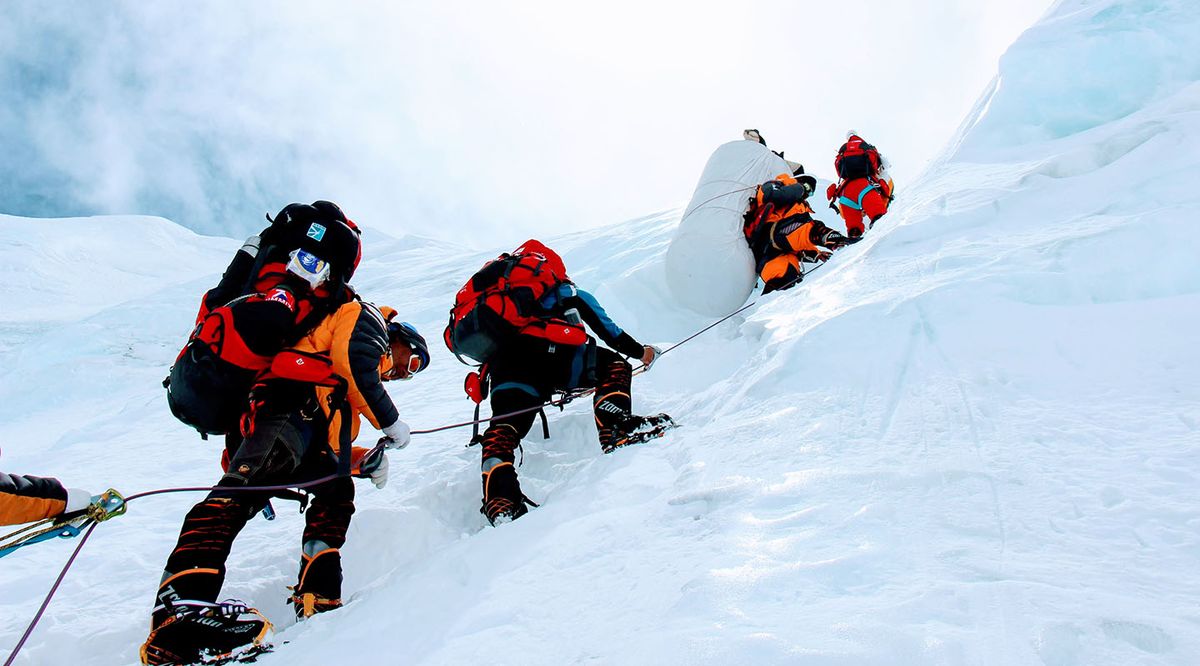 Courtney Reardon '03 was an hour into a training hike when she had to turn around. It was her fourth day at Base Camp (BC) for a two-month expedition to summit Mount Everest. She and her teammates had done shorter hikes up to BC, but now they decided to go on a three-hour hike. Base Camp is a big jump in elevation, at 17,056 feet. Climbers are supposed to "actively rest" for a few days, to move around, but try not to get winded in order to acclimate.

"On the flat part I was still totally fine, but as we hit scree [loose rock], it was three steps up and one step back, sucking my energy." Reardon recalls it felt like she was stuck in cement.

"I was breathing so heavily, and my teammates seemed totally fine. I worried I was holding them back. I'd have to take a break for a minute every few steps up this little moraine. I told myself, this doesn't feel right, but I couldn't see the path back down in the loose scree. Afterwards, I was consumed with the thought, am I in over my head?"

Those few tough hours and the rest of that day threw everything into question.

Reardon had never had any ambition to climb Everest. She had a preconceived notion that it was crowded. "I didn't know about the north side then. Only about a third of Everest climbers choose to climb the north side in Tibet. Helicopters are not allowed to perform rescues in China, and that keeps many inexperienced climbers away from the north side," she says.

A director in institutional equity sales in New York City, she knew it would be tricky taking two months off work, but she'd been with her firm seven years, which is "a long time on Wall Street," she adds. Also, she and her husband, Doug, had been married three years, with no kids, and the clock was ticking. "If I wanted to do this, it needed to be now," she says.

Reardon decided she wanted to climb an 8,000- meter peak and did the research. She looked at each peak and noted the death rates, which were actually quite low for Everest because the mountain has a good rescue structure in place.

"It's hard to ask for time off to climb something no one's heard of," she says. "It's hard to get people excited about it." There was some risk in asking, but her firm was supportive from the get-go.

"I had always kept my climbing plans quiet," says Reardon. "Only close friends and a few clients knew how into it I was because I had previously climbed Denali in Alaska. I saw climbing as a conflict with work, as time away from the office when I was not reachable, so I never let the two merge."

But her attitude toward climbing translated over to her work environment—setting goals far out, then taking steps to accomplish them, having a process. And keeping the plan loose enough that you don't miss opportunities along the way.

One of her work goals had been to grow several of her accounts into top 10 revenue generators at the firm—"which I'd done," she says. "So that gave me credibility, too, when I asked to go."

One life lesson she's learned is that she is a "very fear-driven, cautious person, filled with selfdoubt all the time even though I'm successful," she says. "But fear can be a good thing. It helped me to plan a safer climb, to find the best operator, to train harder as though my life was on the line.

"Fear is a great motivator," Reardon adds. "Not fear of failing—if I fail I can adjust my preparation and try again—but fear of suffering. There is going to be misery, suffering, and discomfort no matter what, but with preparation I can reduce that noise and increase my odds of accomplishing my goal. Win-win." 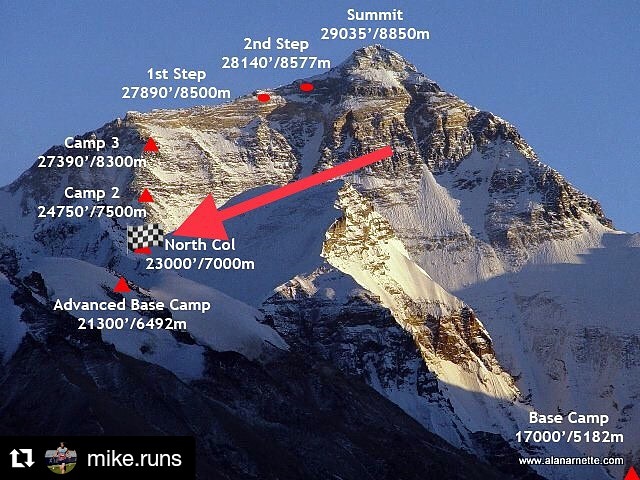 Back on day four at Base Camp, after the tough training hike, Reardon was questioning herself. "It was more than humiliating," she wrote in her Instagram. "Aren't we here to climb Everest?" The moment she had to turn back to camp to recover, she was plagued with self-doubt. Overwhelmed by her sense of weakness, her emotions spiraled downward.

It wasn't the first time she had put herself in a situation where she felt overextended, or in over her head, she explains. "I do it frequently, and, I thought back, I've been doing this my whole life, so it's just how I'm built." So Reardon called her husband, Doug, and promised him that, after this trip, she would stop doing this to herself. What was she trying to prove? All of their vacations, together and apart, revolved around skill development of one sort or another—skiing, ice climbing, even their wedding involved kiteboarding, and their honeymoon was spent hiking Kilimanjaro. Why, she asked herself, can't we relax?

"Well, he was the wrong person to call," she says, because he likes to challenge himself, too, and respects her for doing the same. So the pity party turned into a pep talk. "He reminded me how much I love doing this. I'm in my element once the climbing gets going. And these teammates I was hiking with were ultramarathoners who trained in the Alps and sometimes did races that last 24 hours.

I shouldn't have expected myself to keep up with them. Doug reminded me that I should be happy to be part of such a strong, capable team. I was."

Reardon deeply believes that it's good to push herself, good for her character. "It's how you grow," she says, but even she worried that she'd overdone it. They were a really small team, so one struggling person could suck resources from others on the team.

"Experience was important," she adds, "because I wanted to reduce the variables screaming at me. If everything was new, I would have been overloaded. So I tested myself with prior climbs and physical training. I identified and focused on what I could control." 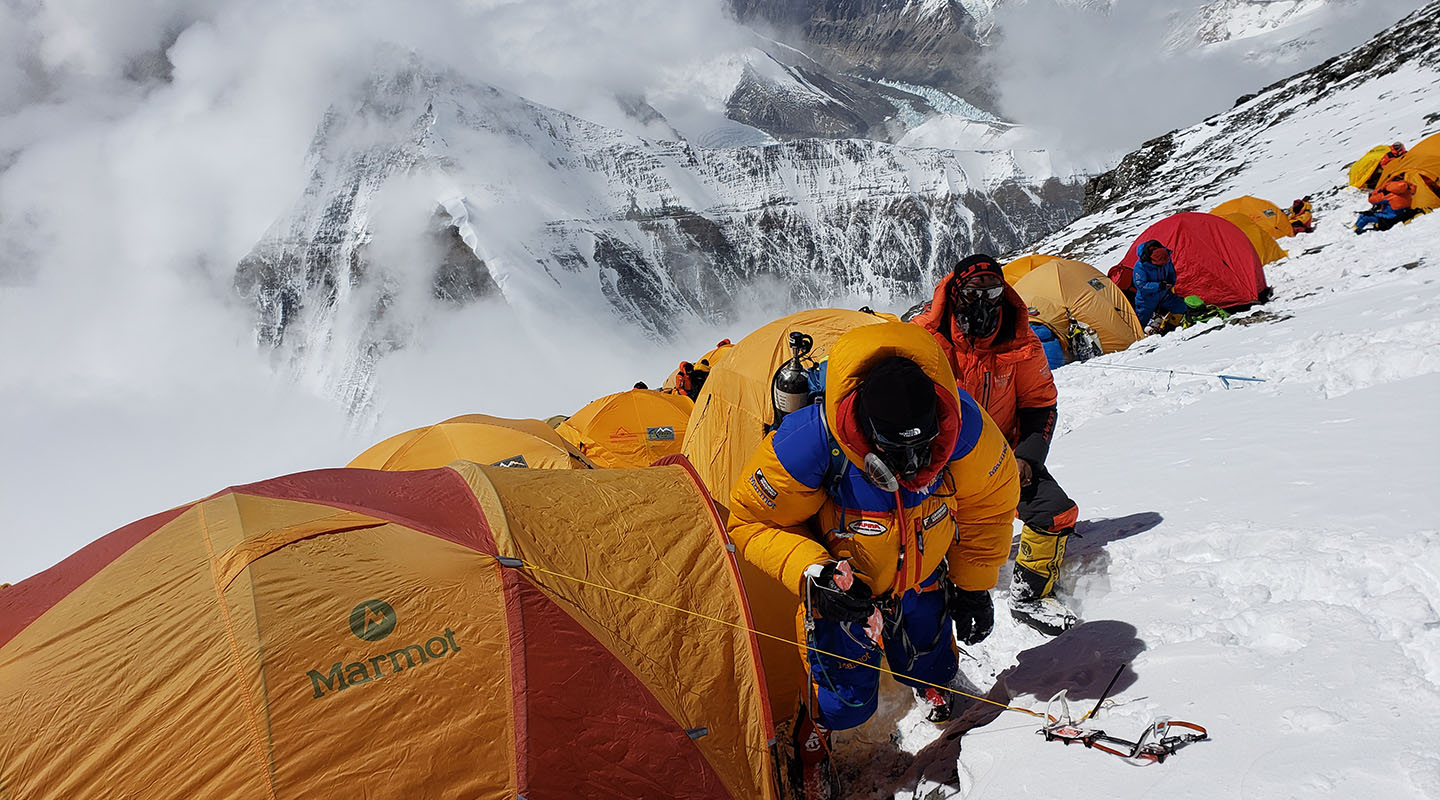 In addition to Sherpa support, Reardon's team consisted of four people, including their guide, Rupert, who rescued a snow-blind American climber in 2013, while he (Rupert) was attempting a solo summit without supplement oxygen or Sherpa support. (Fewer than 20 climbers have ever done this, Reardon believes.) Their head Sherpa, Mingma, was tied for second-most summits with 21. The record is 22. "My fellow members were alpine ultramarathon runners from Austria and Germany—a consultant, an architect, and a software engineer," Reardon says. "They were great!"

But the altitude is no joke. Even Base Camp is higher than any peak in the Rockies, so all climbers, even Sherpa, have to adjust to the altitude slowly. To prep their bodies for the summit push, climbers ascend part of the way and then climb back down, multiple times.

So she soldiered on. The team continued to acclimatize, moving up and down the mountain, waiting for the weather window so ropes could be fixed to the summit by the Chinese government.

Reardon's first acclimatizing cycle was to Advanced Base Camp (ABC) at 21,300 feet, then down to Base Camp. For the second, they went back to ABC and then climbed a 1,000-foot ice wall to North Col Camp 1 at 23,000 feet and back down to Base Camp. They rested at BC before the final summit push, in which they spent a night at each of the six camps. (This technique is only used on 8,000-meter peaks, she says.) "In some ways, we climbed the mountain twice when you think about the changes in elevation from going up and down," Reardon explains.

It was important to Reardon that she shared both her difficulties and successes during the expedition on Instagram. "I felt that if I only presented the rewarding aspects of Everest and my successes, should I reach the summit, then I'd be a fraud in making it seem easy for me," she says.

"Maybe I also wanted to hedge people's expectations of me, that maybe I wouldn't summit. But people saw me as strong and capable, and I wasn't," Reardon says. "But then it turns out I was." 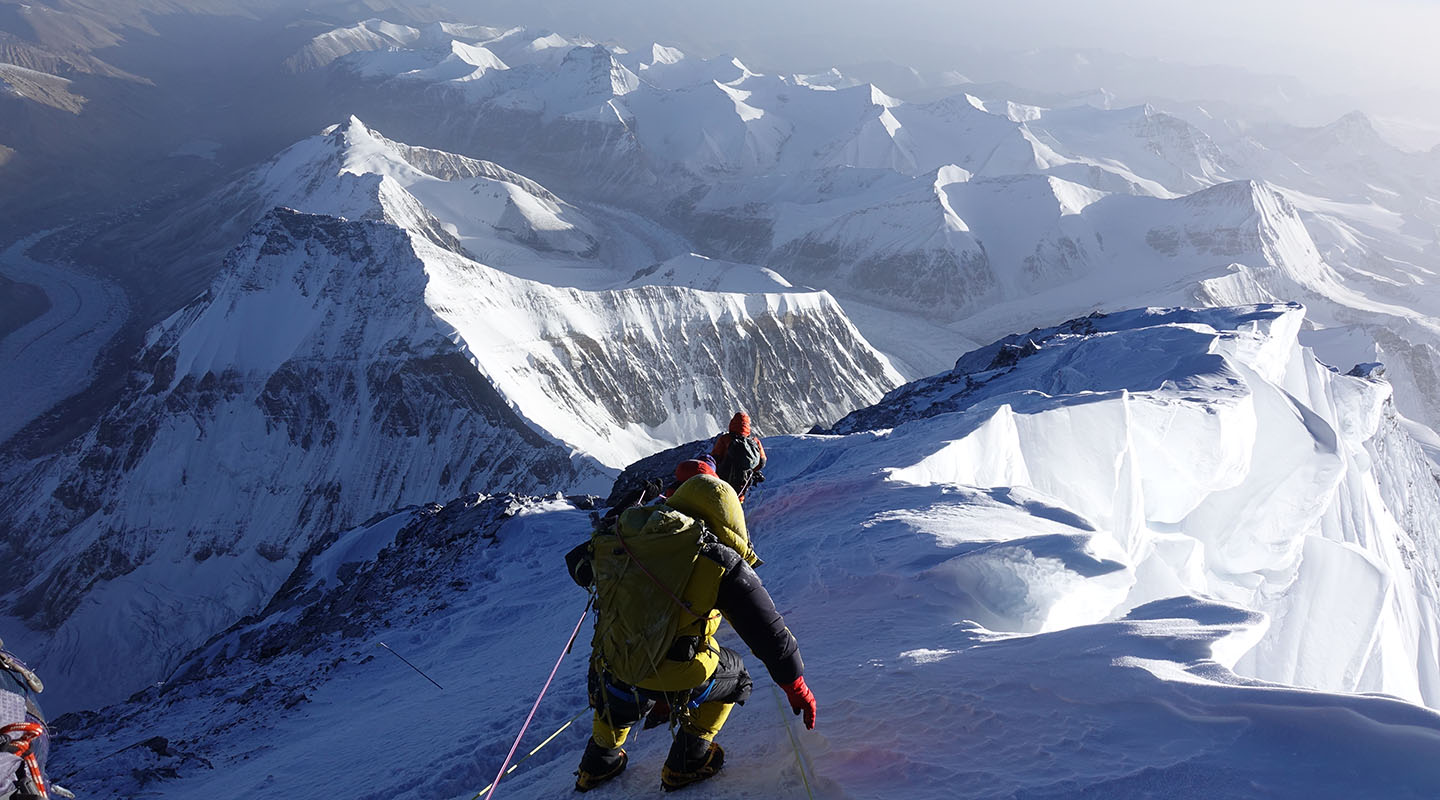 On May 16, Reardon became the 68th American woman to summit Mount Everest and survive; globally she is the 475th woman to accomplish that feat and the 599th American. 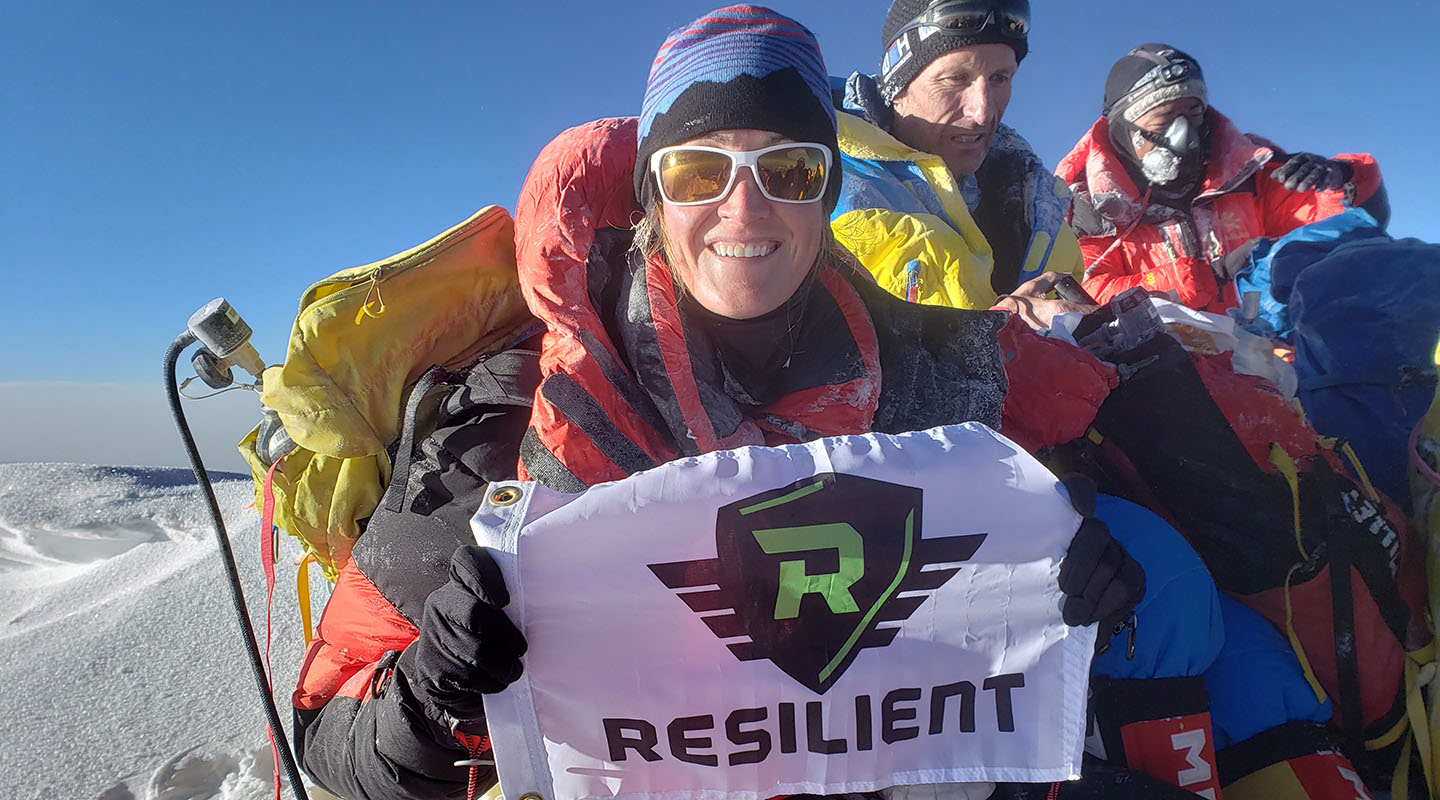 Courtney Reardon answers some questions about her expedition to the summit of Mount Everest.

How long was summit day?

It took about seven hours from Camp 3 (27,390 feet) up to the summit at 29,029 feet. We started at 10 p.m. and reached the summit at dawn, maybe 5 a.m. I spent about 30 minutes on the summit admiring a view normally reserved for jumbo jets at cruising altitude. Climbing down took 14 hours because we descended all the way to ABC that day. I don't think many, if any, other teams descended that far, but it worked for us even though it meant we were awake for almost 40 hours straight.

How many people have summited?

A total of 3,563 different people have summited Everest and survived. More have summited, but 80 percent of accidents happen on the way down. Roughly 70 percent climb the south side of the mountain; only 30 percent ascend the north side.

What was the most challenging part?

On summit day, there are three "steps," where you are climbing on rocks rather than snow/ice. This was tough with crampons (steel spikes) on your feet and massive, clunky boots because they can't grip. On the second step, for example, you must first climb about 10 feet of rock slab, then climb the near-vertical, rickety 30-foot ladder. This section is very exposed with a 10,000-foot vertical drop. It is more difficult to navigate on the descent since you cannot see your foot placement on the ladder rungs.

What was the best part?

Overcoming doubt and fear. Even before we left the highest camp at 27,390 feet on summit night, I silently thought to myself that maybe I could just stay here and call this my highest point. Yet, minutes into it, I was climbing well, quickly passing or closing gaps to climbers ahead of me. I'm most proud of the fact that I climbed up and down swiftly and crisply, never sloppily or slipping. I had it. This was within my capabilities. No more doubt.

I rose to the challenge in ways I didn't know I had in me. Everything was hyper-focused on my footwork and movement and breathing and mind control. On a prior climb, I once heard someone ask, "How much longer?" to the summit or next camp, and I decided never to do that because that's the first crack. You can't show any weakness, especially to yourself.

Julie Reiff is marketing and communications director at Gould Academy in Maine. She is the former editor of the Taft Bulletin. 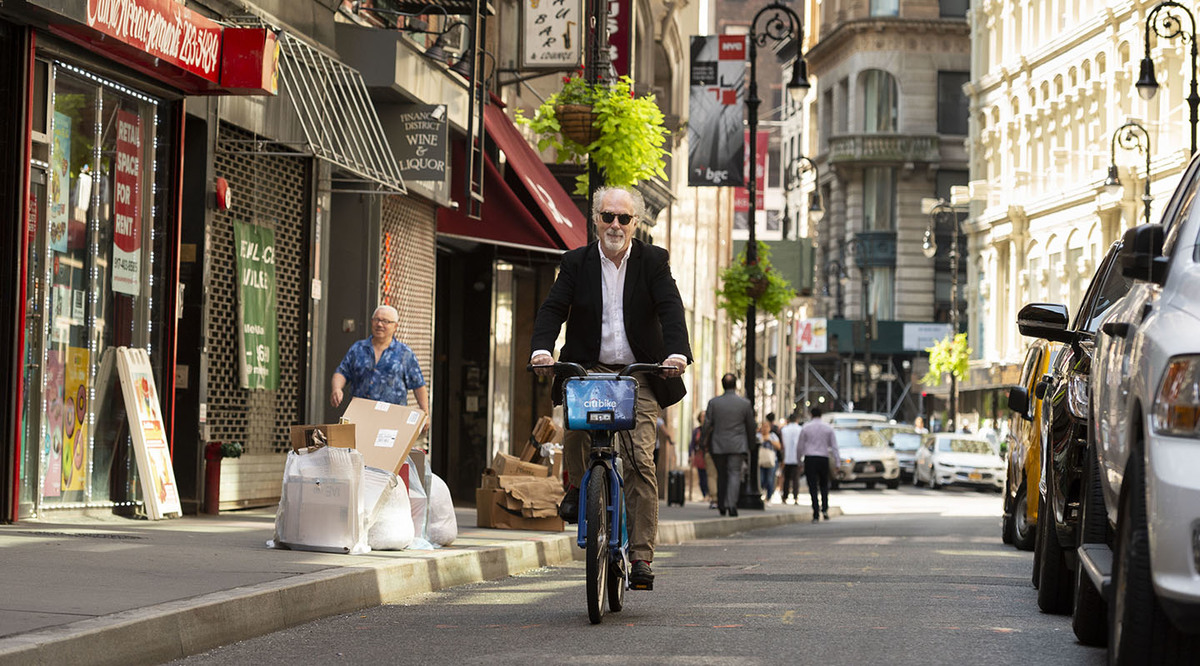