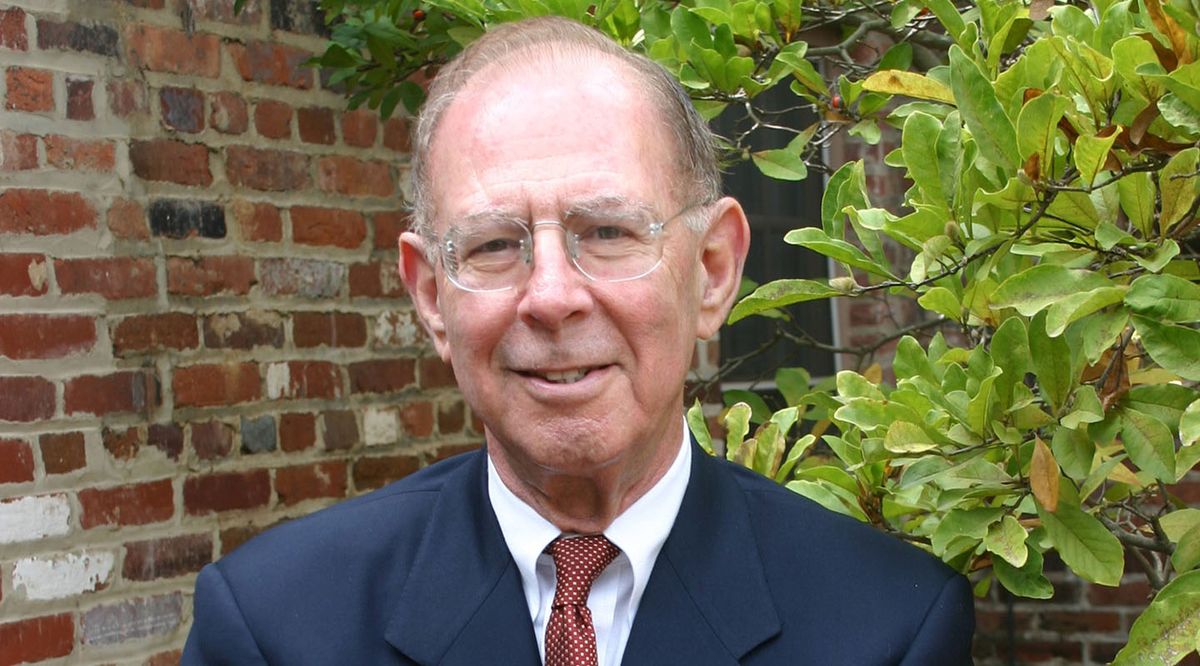 One for the History Books
Christopher Browner '12

If Harlow Giles Unger '49 could board a time machine and instantly be transported to 1776, he'd be right at home. With 27 books (and counting) to his credit, including 17 about the Founding Fathers, Unger is one of the nation's leading authors on the American Revolution and the power players who shaped the nascent United States. But with such an extensive bibliography, it may come as a surprise that as a child Unger had little interest in history.

"It never occurred to me that I could be anything other than a doctor," he recalls. "In our family, that was all you were going to be." The son of renowned physician Lester J. Unger, a pioneer in the development of lifesaving blood transfusion techniques, Unger spent many of his formative years preparing to follow in his father's footsteps. But when, after a year and a half, he could take no more of medical school, he found himself unsure of his future for the first time.

In stepped Jacques Grosbois, a friend from Unger's youth who worked as bureau chief of the Agence France-Presse, then the world's largest news agency. Aware of Unger's fluency in French (Unger grew up splitting time between New York and Paris), Grosbois hired him as a translator for the agency's foreign wire service, much of which arrived in French. For the next few years, Unger had a hands-on education in the art of writing for newspapers, ultimately landing a position as junior editor for the New York Herald Tribune Overseas News Service. After crisscrossing the globe to cover stories, he eventually formed his own newspaper syndicate—the Harlow Unger Report, providing articles to 75 publications spread across more than 50 countries on most continents—and also contributed regular reports for the Canadian Broadcasting Corporation.

At the same time that he was making a name for himself as a journalist, Unger was devoting much of his free time to helping less fortunate students get into college. Volunteering with the nonprofit Sponsors for Educational Opportunity, he spent years working "to identify children in underprivileged schools who had a potential to go to college but couldn't realize that potential due to their circumstances," he explains, adding, "I became an expert on college admissions." It was only natural, then, that he would also guide his son Rich's application process when the time came for him to consider potential universities. And when Rich secured a place at his dream school, he thanked his father by declaring, "Dad, you really ought to write a book!" 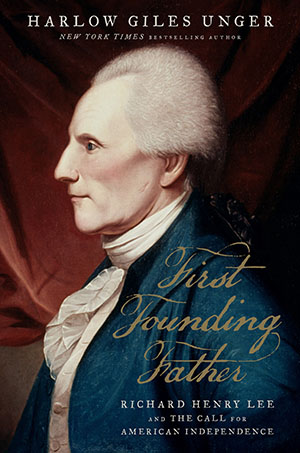 With the idea firmly planted, Unger embarked on his first full-length work, A Student's Guide to College Admissions, published in 1986. For the next 10 years, he penned a series of books to help students, parents, and teachers navigate the education system, including How to Pick the Perfect Private School and What If I Don't Want to Go to College? So when his publishers were looking to compile a thorough Encyclopedia of American Education, they knew just the man for the job. "I ended up producing a three-volume encyclopedia," he says, "and part of the work involved writing relatively short biographies on important figures in American education. Even though they were only going to take a page each in the book, I still had to do quite a lot of research on these figures." Little did he know that these brief biographies would end up launching the second phase of his literary career.

"One of the figures that astounded me toward the end of the encyclopedia was Noah Webster," Unger remembers. "We mostly think of him today as the creator of the first American-English dictionary—in a way, he's the father of 'American' language—but I discovered that his contribution to American history was so much greater. He fought in the Revolutionary War, became a close associate of Washington, and was the resident intellectual guru during the writing of the Constitution." Yet despite all of Webster's extraordinary achievements, Unger was hard pressed to find a satisfactory account of his life. "I looked around, and there hadn't been a biography about him in close to a century—so I wrote one myself!"

The success of this first foray into American history, Noah Webster: The Life and Times of an American Patriot, spurred Unger on to further research into Webster's fellow statesmen. "I started looking around for other Founding Fathers to cover, but all the major names were taken," he laughs. "I went to the library and started going down the shelves until I found a name that was lesser known, and I fell on John Hancock. Nothing had been done about him, but everyone knows his signature." And by the time that he completed his next (and possibly favorite) book, Lafayette, he was "truly off to the races."

In the years since, Unger—whose numerous accolades include being named a Distinguished Visiting Fellow in American History at Mount Vernon—has explored the lives of many figures from early American history, from patriots Patrick Henry and Richard Henry Lee to John Marshall, the fourth Chief Justice of the Supreme Court, to the incredibly influential Henry Clay. He's also profiled some of the United States' first presidents, chronicling George Washington's private life in two volumes and examining the country's fifth commander-in-chief in The Last Founding Father: James Monroe and a Nation's Call to Greatness, which went on to become a New York Times bestseller. His most recent title, Thomas Paine and the Clarion Call for American Independence, hit shelves this fall and focuses on someone Unger hails as "quite an enormous factor in the Revolutionary War, so much so that John Adams called the era the 'Age of Paine.'"

Each time that Unger approaches a new "character," as he likes to call them, he does so as he would any newspaper subject, incorporating a wealth of quotations from primary sources. "As a former reporter," he points out, "I never editorialize. I let the characters speak for themselves. In a sense, I interview them and their colleagues, associates, friends, and families—really anyone who knew them or had contact with them." These "interviews" require an enormous amount of research, with Unger reading "anything that they ever wrote, as well as anything that was written to them or about them by contemporaries," and traveling around the world to view collections of each man's private papers and manuscripts. 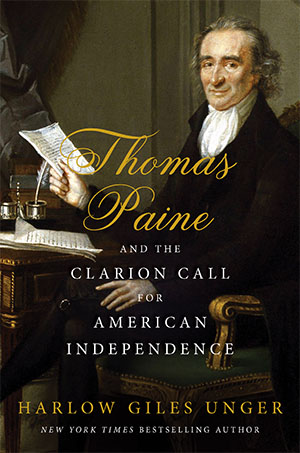 But once all of this research is complete—a task that Unger admits is much faster nowadays, both thanks to the accessibility of information on the internet and because, by this point, he has read most of the Founding Fathers' collected writings— the rest quickly falls into place. "I'm a compulsive worker," he confesses, "and once I get started, I work on the book seven days a week. The whole process usually takes two years, but the actual writing only takes 90 to 120 days at most."

His experience as a journalist also contributes to his ability to tell a story effectively. "I'm able to absorb things in my head and visualize the order of importance," Unger says. But this background can also become a hindrance. "A newspaper article is written in an inverted pyramid, with the most important aspects in the lead and then elaboration of each element in the subsequent paragraphs," he explains. "The structure of a chapter cannot be that way. When you get to the end of the chapter, you have to make sure that you leave the reader in suspense, so they get to the next chapter. That was certainly a skill that took some getting used to."

Unger often seeks inspiration not from fellow biographers but instead from skilled authors of fiction. "Ever since I started writing books, I've devoured literature," he says. "I've even gone back and read everything I ever read at Taft—sometimes three times."

One such notable literary figure that Unger admires is George Eliot, whose Middlemarch once helped him crack a particularly difficult case of writer's block. "I was working on a biography of George Washington, and the subtitle was going to be 'His Private Life,'" he says. "Well, his private life was that of a farmer. I started writing it, and I started to get bored with my own writing. I needed to look to a great writer who had written about ordinary people, and I came upon Middlemarch. What a genius Eliot was. The whole novel takes place in this nowheresville in the middle of England, but she brings it alive. So I studied how she makes each character interesting and the techniques she uses to make the surrounding landscape interesting."

And now, with his 27th book officially in print, Unger is already preparing to tackle his next character. "I have all the research material," he says—though he's not quite ready to reveal who the subject will be. In the meantime, the Wall Street Journal's excellent review of Thomas Paine and the Clarion Call for American Independence means that he'll be busy with speaking and book-signing engagements. After a break over Christmas, Unger will set to work on his next subject, and the rest, as they say, is history.

To see the many books that Harlow Giles Unger has written, visit the website HARLOWUNGERBOOKS.COM

Christopher Browner '12 is associate editor at the Metropolitan Opera and regularly contributes to the Taft Bulletin. 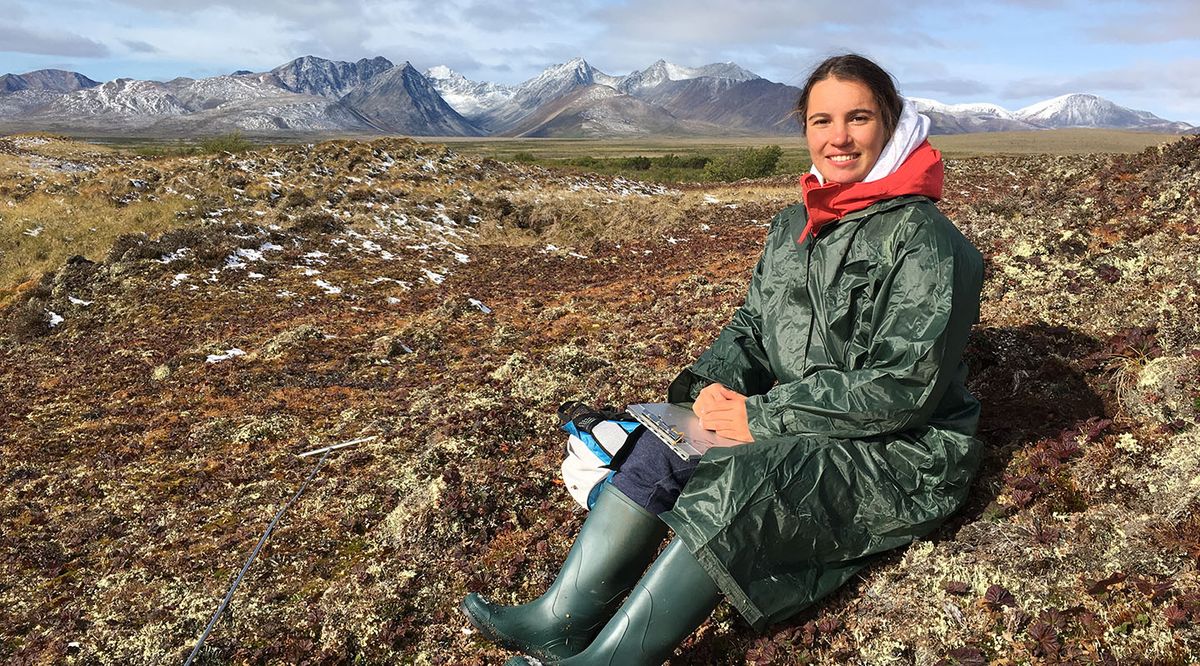