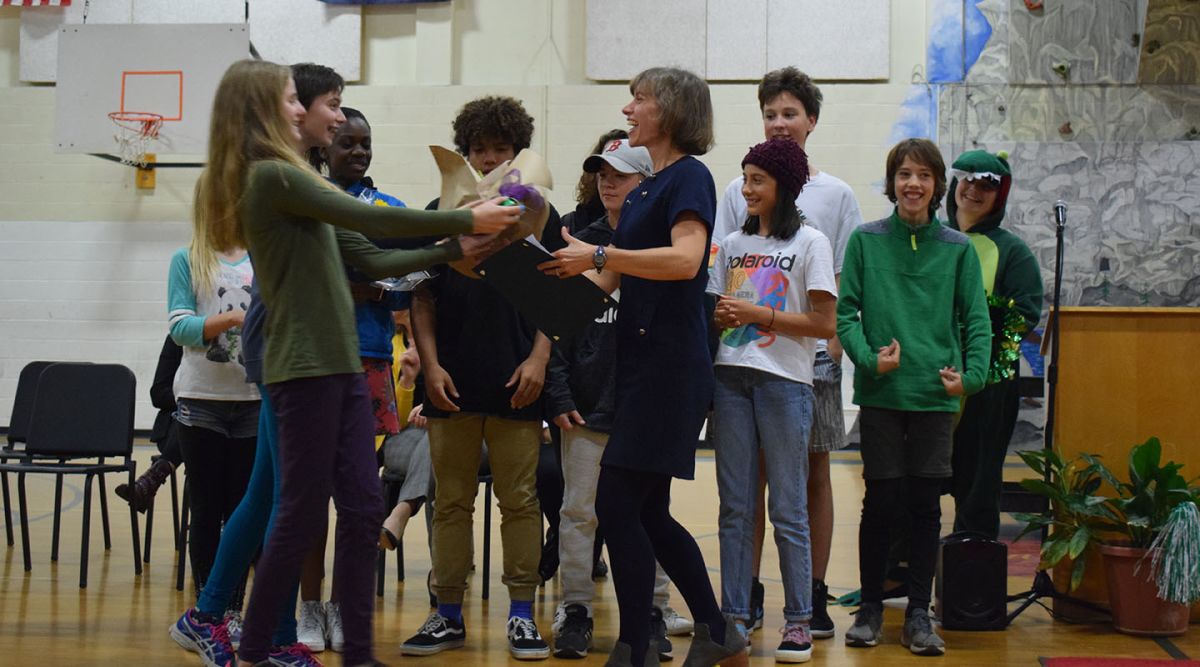 A Lesson Unlike Any Other
Neil Vigdor ’95

Vermont’s 2020 Teacher of the Year, Bibba Walke Kahn ’97, is a French and Spanish teacher at Main Street Middle School in Montpelier. She has used the platform to focus on equity in the classroom and to make students feel valued, especially during an unprecedented and stressful time for students, teachers, and their parents.

Her foray as an educator came during a gap year when she traveled to Ghana as a volunteer and was placed at a free school run by a nongovernmental organization.

"I had no idea what I was doing," Kahn says. "After watching for a few days, the teacher said, 'You should teach an English lesson. It's your first language.'"

That was the aha moment for Kahn, who was named the 2020 Vermont Teacher of the Year. There was nothing like the feeling of being in front of a class.

"That was it. I was hooked," she recalls.

Kahn's teaching odyssey took her to an all-girls independent school in San Francisco, a boarding school in New Hampshire, and an all-boys school in Baltimore before she returned to Vermont, the beloved state where she grew up.

It was a serendipitous homecoming for Kahn, who is a French and Spanish teacher at Main Street Middle School in Montpelier, the same school she attended as a child. Two of her former teachers were still on the staff when she joined the school. And two of her students are the children of her brother, Peter Walke '99, who in February became commissioner of Vermont's Department of Environmental Conservation (see article page 30).

At the school, Kahn organizes a yearly trip to Quebec City and Montreal for her eighth-grade French class that has become a hit with students.

The trip gives students a chance to practically apply what they have learned in the classroom. It's also an affirmation of their ability to effectively communicate in another language.

"They say, 'I asked for a napkin in French'" Kahn says, citing an example of their progress.

As the Teacher of the Year—an award given by the Vermont Agency of Education, dating back to 1964—Kahn has used the platform to focus on equity in the classroom and to make students feel valued. Amplifying the voices of other teachers has also been a priority.

Kahn's input was also sought out by education officials during what has been an unprecedented and stressful time for students, parents, and teachers.

No lesson plan could have prepared Kahn, a mother of two, or her students for the disruptive force of the coronavirus pandemic. Teachers and students quickly had to adapt to a remote learning model, which Kahn says was particularly tricky for foreign language instruction, which often relies on nonverbal cues.

"We've got our feet under us a little more than last year," she says.

In addition to social distancing, temperature checks, and requiring students and staff to wear masks, Kahn's school this fall utilized a widely favored cohort model, where students and teachers are clustered together in small groups to avoid transmission of the virus.

"I'm taking heart in Vermont's health data," she says. "We have really low community transmission. For the most part, we have mask mandates in my town, and people take it pretty seriously and are thoughtful about it."

In Vermont, the decision whether to return to in-person classes, stick with remote learning, or adopt a hybrid model was left up to individual school districts. About 20 percent of schools opted to go to a virtual academy model at the start of the school year. Kahn says there is no one-size-fits-all solution to educating students in the pandemic.

"Each family's experience is a really unique experience," she says. "Everyone has different risk factors for COVID. Their school-age kids have different needs."