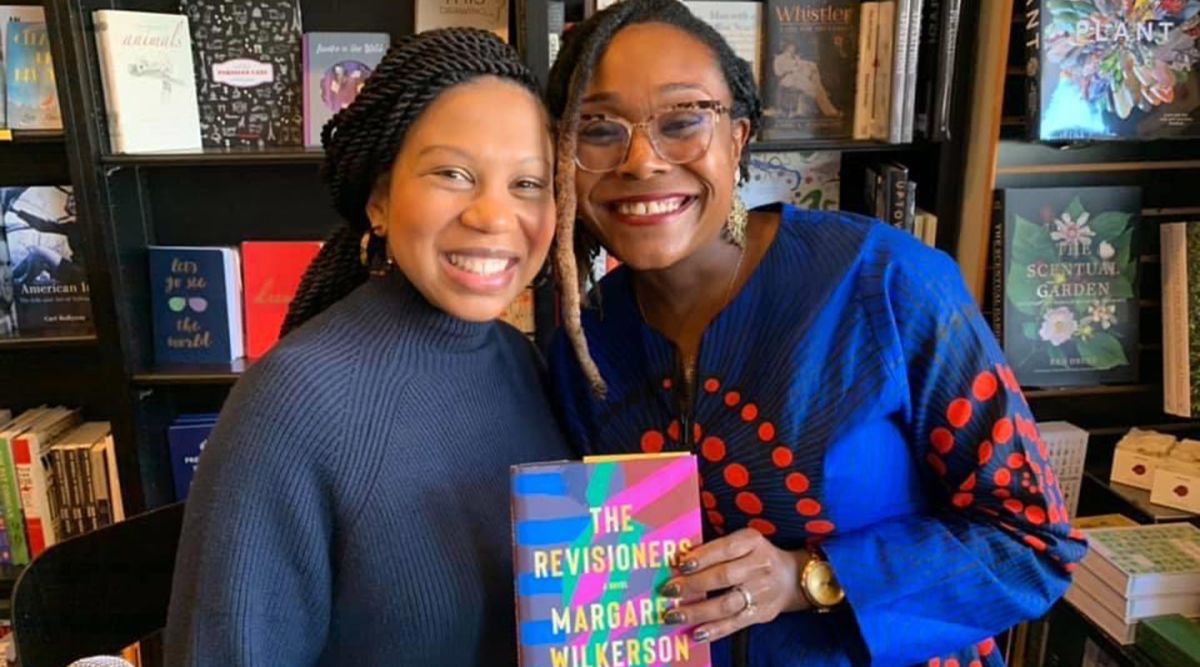 A Q&A with Author Margaret Wilkerson Sexton '00 About Her Recent Book, The Revisioners
Bonnie Blackburn-Penhollow ’84

The Revisioners explores the depths of women's relationships and is set in the American South. Born and raised in New Orleans, Margaret Wilkerson Sexton's debut novel, A Kind of Freedom, was highly acclaimed. Her work has been published in The New York Times Book Review, Oprah.com, and other publications.

Sexton at a reading of The Revisioners in Los Angeles with Well-Read Black Girl founder Glory Edim.

The Revisioners explores the depths of women's relationships—powerful women and marginalized women, healers and survivors—and is set in the American South. It is a novel about the bonds between mothers and their children and the dangers that upend those bonds, and ponders generational legacies, the endurance of hope, and the promise of freedom.

As the book begins in 1924, Josephine is the proud owner of a thriving farm. As a child, she channeled otherworldly power to free herself from slavery. Nearly 100 years later, Josephine's descendant, Ava, a single mother who has just lost her job, moves in with her white grandmother, Martha, a wealthy woman who pays Ava to be her companion. Martha's behavior soon becomes erratic and threatening, and Ava must escape before her story and Josephine's converge.

The Revisioners are the group of enslaved people who, through a lottery system, select one among them whom they will all help escape slavery. The path to freedom they envision will not be attained through logistical practices; rather it will be through the collaborative power of their mind and spirit. Whether this particular group of enslaved people escapes is beside the point. The true manifestation of their power is demonstrated in its liberating impact on their descendants, generations later—descendants who are searching for their own relative freedom. All of the force that went into those visions will not be in vain.

What inspired you to write this book?

I was motivated in part by the 2016 presidential election. I saw the significant discrepancy in voting patterns between white women and Black women, and I wanted to explore the history of separation between the two groups. There's more uniting the demographics than dividing them, and I wanted this book to offer opportunities to facilitate communication and reconciliation.

Where did the idea come from?

I wanted to explore the idea of the legacy of racism. We understand how it travels down through generations through systemic and cultural and familial tracks, but I wanted to look at other more nuanced means by which the dynamics between the races might be transferred.

Religion and cultural practices merge in the lives of the slaves on Wildwood Plantation. How does Christianity fit into their lives? How about Ava's life?

The enslaved people on Wildwood's plantation practice a combination of West African spiritual beliefs and the Christianity they encountered in America. Both serve as anchors for the enslaved, especially for Josephine as she leaves Wildwood and her mother. She's buttressed not only by the divine power she believes in, but also by the connection that the religion provides between her and her family.

What is the role of music in building strength for both Ava and Josephine?

There's an invisible thread that connects Ava and Josephine. There are veins throughout the book that facilitate and demonstrate that connection, and music is one of them. Tools like music remind the reader of the ongoing bond between the two women, and they also serve as actual ties between the characters. It's almost as if anytime one of the characters experiences music, they are communing with one of their ancestors or descendants in a way that transports them from the actual time and space they inhabit.

The lives of the women— both white and Black—as portrayed in this novel are hard. Would Josephine approve of Ava's choice to live with Martha?

I was interested in exploring assimilation in Ava's section. Ava is so eager to be closer with her paternal grandmother, and much of that urge comes from her need to be accepted by her white father and his family. In that way, the white family represents the world and the Eurocentric standard by which people are viewed and judged. We notice as the book goes on, Ava distances from Martha and moves closer to her mother, and through her mother, to Josephine. In moving closer to her maternal ancestors, she finds her strength she's been inadvertently running from—she finds her power.

What's the role of magic in The Revisioners?

In the book, ostensibly disenfranchised people use magic as a way to connect to their source and as a way to control circumstances around them. There were so many restrictions on Black life, of course, during slavery and Jim Crow, but also during Gladys's and Ava's more present-day lives. The characters' use of magic gives them agency.

Josephine's efforts to claim an independent life turn tragic, yet she continues to carry on. What message does that send down the years to her great-great-great grandchild?

Ava's at her strongest when she's most aware of the connection between her and her great-great-great-grandmother. The message that is passed down is that Josephine's strength literally lives inside her descendant. Whatever trials Josephine endured, Ava is also inherently capable of enduring.

Where do you see magic today?

When the book came out, there was a lot of talk in interviews about it being magical realism, which makes sense. Having said that, every element of "magical realism" in the book is based on an actual belief that I hold. I see magic in every aspect of my life.