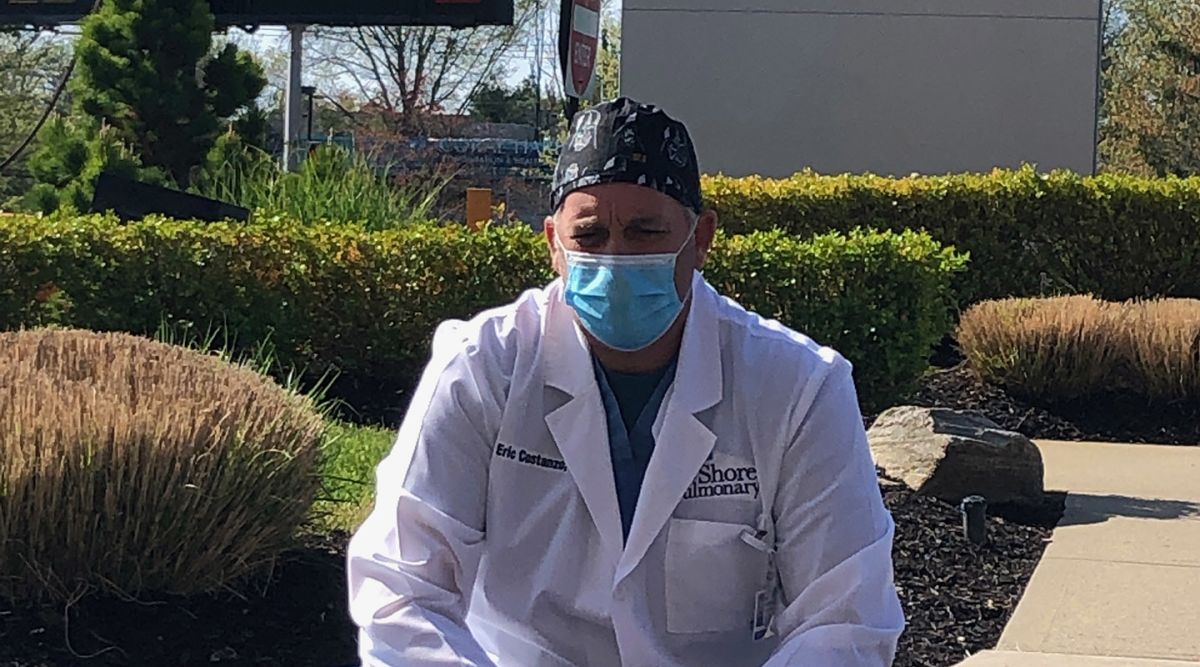 Since the COVID-19 pandemic hit in March, Dr. Eric Costanzo ’92 at Jersey Shore Medical Center has been working hard. “We had the ability to handle [hundreds of] critically ill patients while keeping physician and resident wellbeing in mind,” he says. “We created an environment where we could handle continuity of care and really handle the surge when it came.”

IN EARLY MARCH, ERIC COSTANZO '92 was walking through the Intensive Care Unit at Jersey Shore Medical Center in Neptune City, New Jersey, when its first COVID-19 patient was confirmed. Within two hours, there were 14 cases.

"I'm a big fan of military history and leadership, and I really took to the book We Were Soldiers Once...and Young," says Costanzo, who serves as director of the pulmonary medicine fellowship, director of the critical care fellowship, director of the medical intensive care unit, and director of interventional bronchoscopy at Jersey Shore Medical Center, where he has worked for 13 years. He went to medical school at the University of Medicine and Dentistry of New Jersey after working as a lifeguard, firefighter, and EMT in his teens; he became a paramedic by taking a course while an undergraduate at Muhlenberg College.

"I had just watched the movie, and there was a scene in which Mel Gibson's character called in a "Broken Arrow" over the radio to signal that his unit in the Vietnam War was being overrun and needed all the reinforcements that his superiors could provide.

"I saw fear in my staff, fear in the doctors and nurses," Costanzo says, "and I walked into a meeting of the hospital administration that was happening at the time and said, 'Broken Arrow. We are going to have an explosion of COVID patients, and this is what we need to do.'"

His plan involved converting the 600-bed hospital into a 500-bed intensive care unit, creating "Delta Squads" of health professionals, and everyone's schedule to four says that while he was not sure the hospital administrators would accept his plan, which required shutting down entire hospital departments, like orthopedics, they did.

"The next day, we had the ability to handle 200 critically ill patients while keeping physician and resident well-being in mind," he says. "We created an environment where we could handle continuity of care and really handle the surge when it came."

And it did. While the hospital typically has about 25 patients on respirators, at the height of the first surge it had just under 200 on them, with other patients on different high-flow oxygen methods.

"The greatest thing about the experience was that from the day we saw our first patient, we were prepared, and we had wonderful outcomes," Costanzo says. "I knew I had the manpower, I knew I had the beds, and I knew I had the space." Organizing the teams was the real challenge.

Thanks to some foresight, though, Costanzo was prepared. "In early January, we had an obese, older gentleman come into the hospital," he says. "He died for no [apparent] reason, and we couldn't quite figure it out, but in retrospect, I think he was our first COVID case."

"Medicine has become bundled today—like the steps that you take to treat pneumonia, for instance, but since this was a novel virus, you had to almost experiment," he says. "To be in the trenches during that time was very demanding, but also exhilarating because you got to practice medicine like they did when the AIDS epidemic came out and no one knew what it was. They were trying this and trying that."

A few weeks after that patient died, Costanzo reached out to some critical care doctors in Italy to determine where their system broke down (the country had a shortage of ICU beds). He also assigned some of his residents to study how medical teams had been organized in China and New York City, which was about two weeks ahead of the Jersey Shore in its outbreak timeline. That knowledge informed the staffing plan that he implemented, with pods of critical care units following algorithms of how they would work.

When we spoke with him in early fall, the hospital had liberated 117 critical care cases—including a pediatric ER physician— from respirators and prevented another 80 from ending up on ventilators. At Costanzo's suggestion, the hospital began playing a song over its loudspeaker every time a COVID patient was discharged from the hospital to keep up morale. One Friday in early September, there were zero inpatient cases. To celebrate that milestone, the hospital filled its halls with an uplifting tune: "Here Comes the Sun."