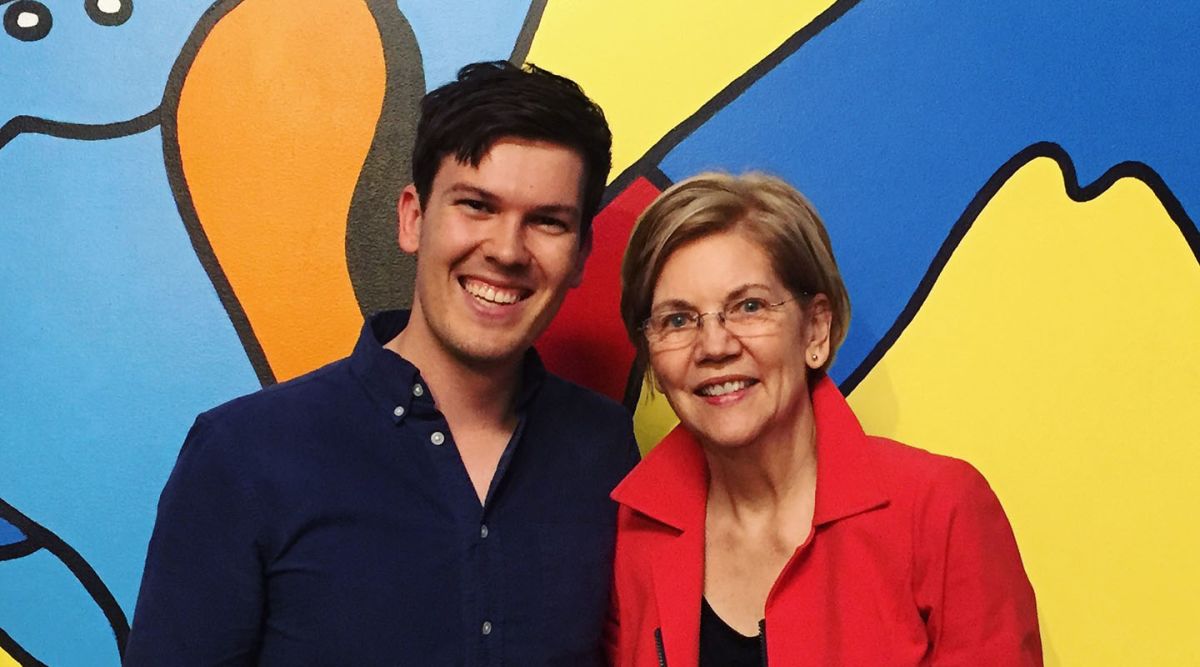 After earning an MBA from Yale in 2017, Will Sealy '05 created Summer, a digital platform and service which has helped tens of thousands of borrowers understand, manage, and ultimately conquer their student loan debt. Not only are Sealy and his 30-person team helping borrowers save money, they've ensured that service is provided free of charge.

Sealy with Senator Elizabeth Warren, a few years after he had worked with her.

"I LOVE POLICY AND BIG THINKING, but at the end of the day, I realized that I'm much more of an entrepreneur than a bureaucrat," Will Sealy '05 says. "I like to take a creative idea and bring it into the world to help people." After working on two political campaigns, serving as a White House staffer, and helping launch the Consumer Financial Protection Bureau, Sealy founded his own company to assist America's student loan borrowers.

After earning an MBA from Yale in 2017, Sealy created Summer, a digital platform and service that has helped tens of thousands of borrowers understand, manage, and ultimately conquer their student loan debt.

"We offer borrowers the ability to plug in all of their loans and track them in real time, and we run their loans through all of the federal, state, and private-sector programs that could potentially result in savings," he says. "We sum up your loans, and when you have questions, we want to sum it up for you—hence the name 'Summer.'

"The results speak for themselves," Sealy says. "We've been able to generate an average savings of $300 per month, and we project savings of $31,000 per borrower over the course of repayment." Not only are Sealy and his 30-person team helping borrowers save money, they've ensured that the service is provided free of charge. "We partner with colleges, unions, and employers, who in turn offer their students, members, and employees access to Summer. So far, we've partnered with more than 150 institutions representing 3 million borrowers."

Sealy discovered his passion for assisting those struggling with financial hardships while working on Barack Obama's 2008 campaign, and after graduating college, he was inspired to follow in the newly elected president's footsteps. "I began working as a community organizer helping California communities devastated by the Great Recession," he recalls. "Companies had taken advantage of these people's lack of knowledge about financial issues, and I became committed to finding ways to better educate people about basic financial concepts.

"This led me to Washington, D.C., as part of the White House team working on implementing the Dodd-Frank financial regulation act," he says. "A major section of that bill was the creation of the Consumer Financial Protection Bureau, set up by Elizabeth Warren." He became one of the CFPB's first 50 employees, eventually serving as a special assistant to Warren and focusing on the student loan debt crisis—a topic close to home, given his own student debt. "I ended up writing the CFPB's first commentary on the student loan market and the bureau's role in both educating and protecting consumers. But when Elizabeth Warren left to run for the Senate, she asked me to join her campaign, where I had the chance to meet with dozens of students on the trail.

"We heard time and time again how difficult it was to understand the loan repayment system. Borrowers didn't know how much they owed, they were paying loans across multiple websites, and they were managing multiple types of interests rates," he continues. "I was thinking that the government had to provide better solutions."

After the campaign, Sealy returned to Washington, but yearned to increase his impact. "I loved that work, but it was slow and incremental," he says. So he enrolled in business school, and Summer was born. "My vision for Summer is to take the digital expertise of a technology company and couple it with the macro-level impact of the government and the social consciousness of a nonprofit advocacy organization."

Sealy credits several Taft friends who have helped him along the way, including Arden Klemmer '05, who helped him design the product as Summer's first software designer; Camden Flath '05, who helped establish the brand's voice and vision; and Calin Gunn '05, who helped Sealy gain some early press coverage and developed the company's PR strategy.

Nearly three years into growing the business, Sealy recently found himself returning to government work, in a sense. "When the COVID outbreak hit, I feared that the resulting financial downturn could have similar impacts as the last financial crisis, if not worse," he says.

He and his teamed turned their attention to state governments, partnering with Connecticut Governor Ned Lamont and Rhode Island Governor Gina Raimondo. "State governments manage unemployment filings when people are at their wits' end," Sealy adds. "We're partnered with them to provide Summer to people who are applying for unemployment, and to date, we've helped thousands of borrowers save several millions of dollars by enrolling them into free federal programs that they might not have known about or struggled to enroll in."

While the team at Summer has expanded these partnerships to include several more states, Sealy is the first to admit that the challenges facing borrowers are steep.

"We're experiencing the highest unemployment rate since the Great Depression, and as many as 24 million people are still being required to make student loan payments," he points out. "That being said, there's never been such a high level of awareness of the problem and a desire across all sectors to help borrowers. After years of uncovering borrowers' stories of immense hardship and reporting eye-popping debt statistics, we're finally breaking through."