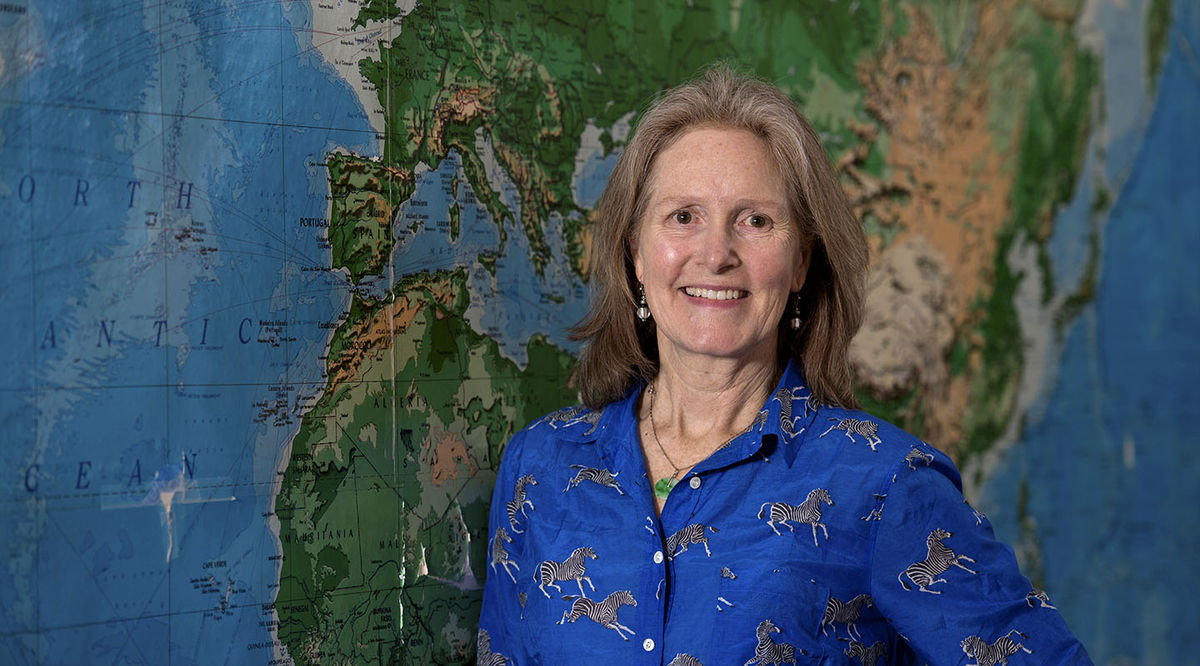 It's 7:30 on a Thursday morning, and Baba Frew, a bag over her shoulder and her hair blown from the wind, takes a seat at the table in the dining hall. Several students are already there for the weekly Community Service Council board meeting. For such a busy group, it's difficult to find another time to gather.

With a few snowflakes still in her silvery red hair, Frew gets right to work. She typically walks or rides her bike from her house on the upper side of campus.

This is a packed month for Frew and her posse of service-minded students. First there is the Dress Exchange, where students (and a few faculty members and mothers) loan or donate dresses to rent for the Winter Formal, a way to make the event more affordable and also raise money for Girls Inc. in Waterbury.

"Kids are taking the initiative now because Baba has put that bug into them of giving back, of living the motto."—Spanish teacher Kevin Conroy

Then there is the Oxfam Hunger Banquet, an interactive event that raises awareness of hunger and poverty issues, followed a few days later by the Red Cross Blood Drive, which the council organizes three times a year on campus. Frew will be there at 1:45 p.m. and stay until nearly 8. Two days later, she organizes students to help distribute at the monthly Connecticut Food Bank Mobile Pantry in Watertown.

On Monday, she and fellow teacher Laura Monti '89 will take a cohort of the Global Leadership Institute (GLI)—a mix of students from Taft and Waterbury public schools—to a social entrepreneurship panel event at Wesleyan University.

"One thing that GLI emphasizes," says senior Lauren Fadiman, a former participant and now on the Community Service Council board, "and that Mrs. Frew makes a priority in her own life, is service learning. She's done a really good job of taking the varied things she does and creating one cohesive community service program." 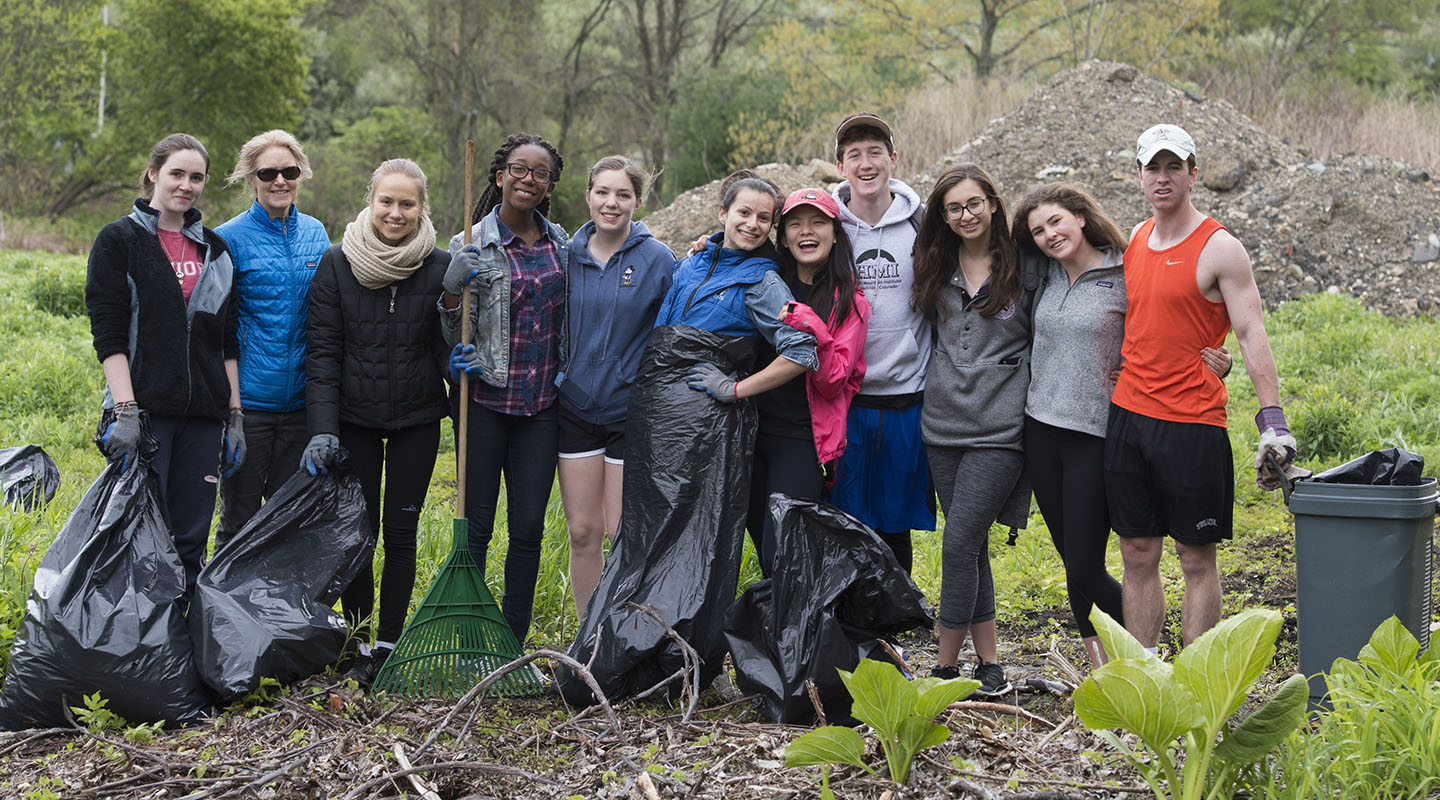 In many ways, Frew has become the face of Community Service at Taft, although she is the first to tell you she gets plenty of help. She took over the Volunteer Program (as it was known for many years) from Emily Jones in the late '90s. 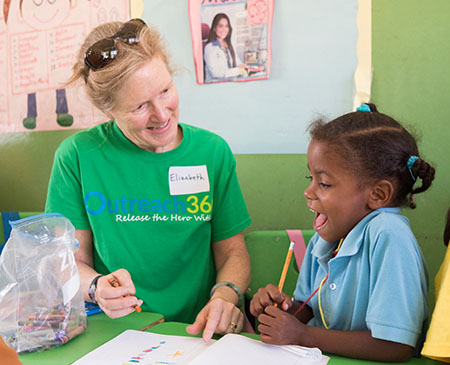 "We continue to deepen these roots with the community and really make them meaningful partnerships," says Frew. "We're trying to develop in our students a sense of what it means to serve in a way that is beneficial for the community, to really look at what the issues are and why you're needed in this community."

The message has certainly reached Lauren. "Mrs. Frew has shown me the importance of being an open ally toward the programs we're trying to support and being really willing to listen to what people need," she says. "The work we do has to be the work other people need done and not what feels good or feels easy."

Today, the program isn't just about volunteering, even for the students who are doing after-school community service work. Each Friday they have a reflection of their week. "We didn't used to have that reflection piece," says Frew, "but now we have specific activities for them to do, lesson plans to create. The other big difference is that we're really listening to the needs of our service partners and how we can meet them. It's a great model, I think."

"Her drive comes from the fact that our kids are so good," says fellow Spanish teacher and head of the Modern Language Department Kevin Conroy. "The kids that work on the Community Service Council or that raise record-setting funds for the food bank, as they just did over Parents' Weekend—those kids are taking the initiative now because Baba has put that bug into them of giving back, of living the motto. The program is thriving. And kudos to her for that."

Frew has taught Spanish for 30 years. She joined her husband, Peter '75, on the faculty in 1988, and now teaches Advanced Placement Human Geography as well. She majored in geography at Middlebury and minored in Latin American studies, and later went back to Middlebury or her master's degree in Spanish. 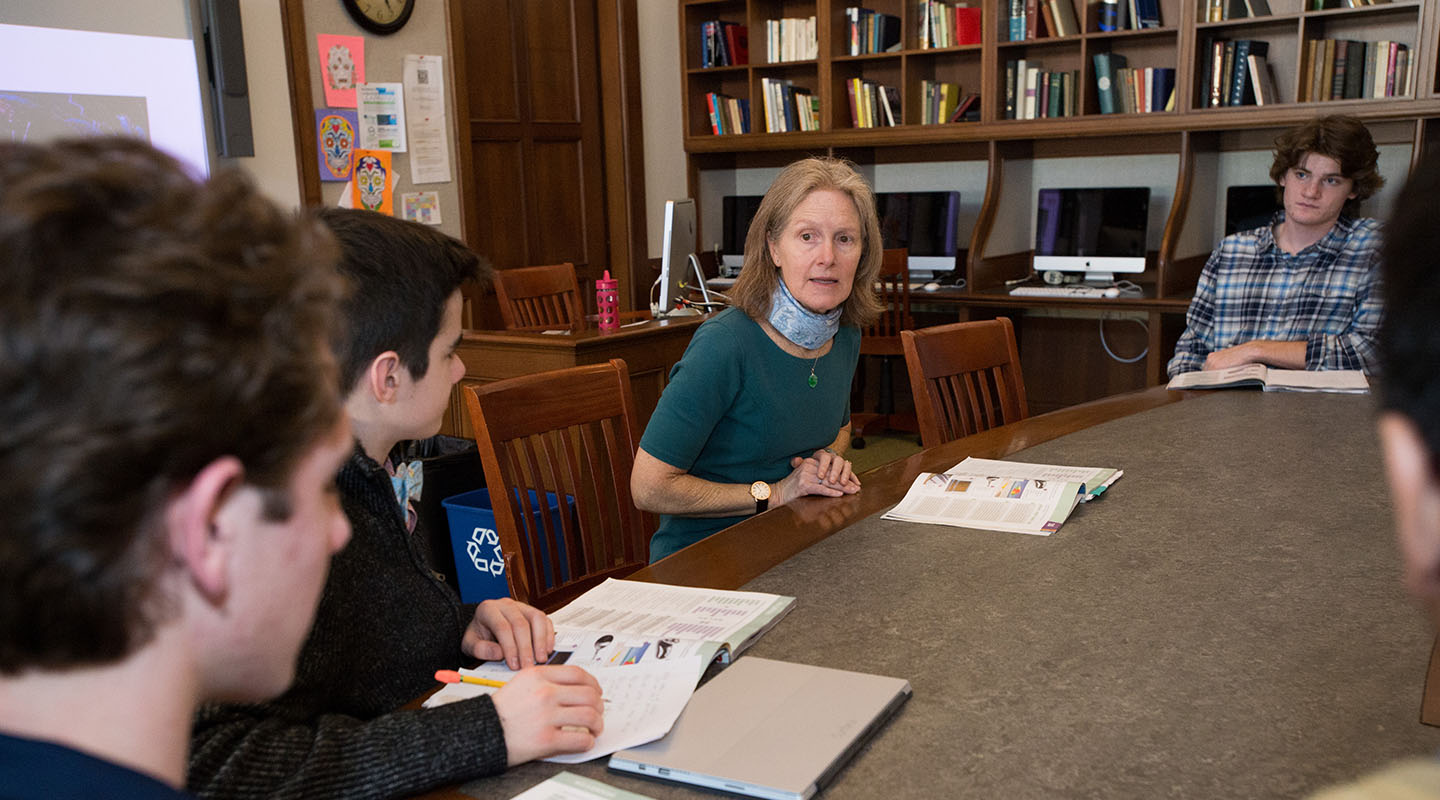 "My Latin American studies minor—yes, it was Spanish, but it was also about seeing all these demographic, political, and economic issues through a geographic lens. It's exciting to teach in two different departments now" (Modern Languages and the newer Global Studies and Service). "Service is certainly part of it, but with GLI, there's a big global aspect—global leadership is very much a part of it."

"Mrs. Frew is really passionate about what she does. And she does a lot, so that's a lot of passion in one woman."—Lauren Fadiman '17

"It's about educating the whole student," adds Frew, "because if I look at the classes that I teach, Spanish, that's certainly a lifelong, global skill, and geography is a class that I think every single student at Taft should take. It's such a great course. I like the fact that you can open the newspaper or listen to the radio or look at the news, and there's something that's totally relevant. What we're talking about and doing is all relevant to their lives."

Her energy and positivity definitely carry through into her classes, adds Conroy. "She'll have students stand up in the first five minutes and have a party-style chat about anything just to get them moving and talking and using the language. There's really very little dead air in a Baba Frew classroom."

As a former head of the Modern Language Department (the position rotates every five years at Taft), Frew has worked with a number of new faculty. But Taft's recent partnership with the teaching fellow program at the University of Pennsylvania (Penn Fellows) has brought increased structure and rigor to the process. This year she serves as a mentor to Anna LaSala-Goettler, a Penn Fellow in French.

"I love being a mentor," Frew says. "Honestly, it's the best thing that's ever happened to my teaching, because it's so intentional. It's an awesome program, and what's fun is applying all of this information that I'm getting, along with Anna."

After three decades in the classroom, Frew is a teacher who is genuinely excited about new teaching methods, who asks herself, Why would I do this? What is the purpose of that?

"The classroom is less teacher-centered now," says Frew. "That can be challenging in a content-heavy A.P. class like geography—we have to get through so much. But I keep coming back to that mantra that the person who does the work is the person who's learning."

That's quite a statement, coming as it does from one of the hardest-working people on campus.

"I don't think anyone knows how hard she works because she doesn't tell anybody," says Laura Monti, who codirects the Global Leadership Institute with her this year. "She's focused on what she's doing with you, when in reality she has eight million other things going on at the same time. She's concerned about how you feel and how much work you have, so it's easy to overlook her and how amazing she is." Monti adds that it's hard to explain how vital Frew's work is to life at Taft. 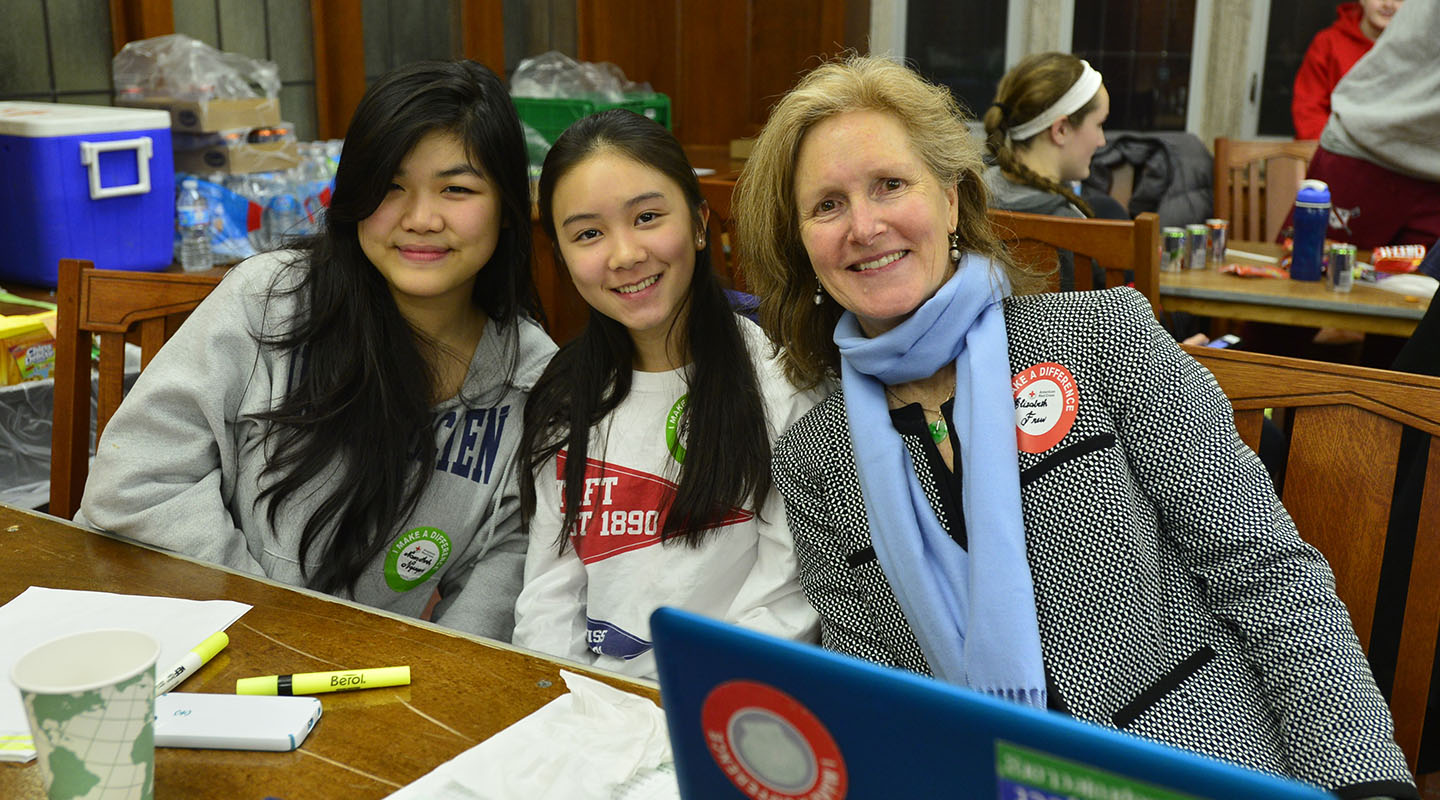 But Frew's strength, Monti says, is that she brings out the best in students because she's gentle with them but still knows when to push. "She's really good at encouraging kids to be their best selves and to do the best job at the task at hand, while at the same time understanding that they're kids and there's a lot going on, and that too much pushing is counterproductive."

They studied leadership styles as part of their work with GLI, says Monti, "and Frew is clearly a deer"—someone known to be collaborative and supportive. People considered "deer" are trusting, careful of others feelings, and concerned with creating positive work environments. "She's the person who wants to make sure everyone feels taken care of. She's much less concerned with how she comes out in the process," Monti says.

"She's really good at encouraging kids to be their best selves and to do the best job at the task at hand."—Faculty member Laura Monti '89

"Mrs. Frew is really passionate about what she does," says Lauren Fadiman '17. "And she does a lot, so that's a lot of passion in one woman. She's been a great mentor in discovering all the varied inequities and problems that still exist in society, and also helping me think about even small efforts to fix those issues, how we can at least do something, helping me discover what riles me up and makes me passionate."

It's Thursday again, and the Community Service Council board is back at the breakfast table, looking ahead to their spring events. Frew, seated to the side, has a plate of scrambled eggs with cottage cheese and is already taking notes. Ostensibly one of the students is the secretary, but she does it anyway.

They discuss the Earth Day carnival, which they will cohost with the EcoMons, as they did the Hunger Banquet and the annual Spring Fling fundraiser at the Watertown Golf Club, cohosted with the Red Rhino Fund.

After the meeting, Frew catches Lauren and tells her how organized they've become. Perhaps, she suggests, they don't even need her at the meetings anymore. They seem to have things under control. Lauren is quick to contradict her.

"I find it a comfort to know she's on the periphery," Lauren says later, "to offer advice, guidance, and encouragement, and just to remind us of what needs to be done and when. I don't know how much we'd get done without her around, but she does a really good job making Community Service at Taft feel like it's as much ours as hers."