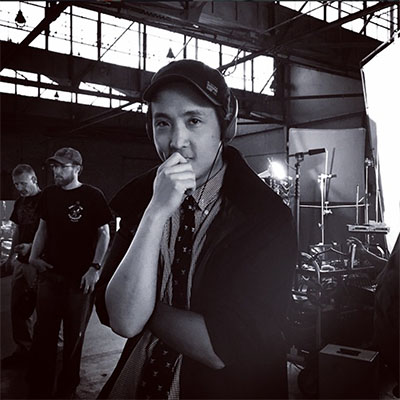 Parenting is hard enough, but raising a son with magical powers would have a unique set of challenges, especially for a single mom. That's the premise of an upcoming Netflix series created by Dennis Liu '02.

Netflix has ordered a 10-episode series of the sci-fi family drama called Raising Dion, based on Liu's short film and comic book of the same name.

"I'm excited about it," says Liu. "The cool thing is that the parent, Nicole, has no powers, but her kid does. She's trying to raise her son under extraordinary circumstance. The usual superhero trope is that the parents die. But this is from the parent's POV. For me, she is the protagonist, even though Dion has the power."

A graduate of NYU's Tisch School for the Arts, Liu has spent much of the past 10 years directing commercials and music videos for artists such as Sara Bareilles, Mariah Carey, Justin Timberlake, Diane Birch, and Sia through the company RadicalMedia.

"I love directing music videos," he says. "I've met some really cool artists that way, but I've been trying for many years to get into narrative, to do movies and television.

"Honestly, it was such a nice surprise," he adds. "I'd tried to take [the series proposal] around town at the time, before the whole "Oscars So White" incident, but I think of late people are finally seeing there needs to be representation of women and people of color."

Michael B. Jordan (who starred in Creed) is cast to play the father, and the team was just finishing the writing process when we spoke. "It's all about the script right now," says Liu. "We're just trying to make sure it's great. From there we'll shoot it."

When he started the project about four and a half years ago, there were very clear reasons to make the protagonist a woman and a person of color, says Liu, who's been a member of the Directors Guild of America's Eastern Diversity Steering Committee since 2009. Their goal is to improve the employment opportunities, working conditions, and the skills of ethnically diverse guild members.

"I still stay involved," he says. "More than ever, it's important that the images we're putting in the world can be so powerful. I love Raising Dion because it presents a unique superhero story from a different point of view.

"I thought I might as well put something out there I feel good about, and now the timing sort of struck a chord when I put it out in the universe."

A reporter at The Washington Post saw the comic book series Liu created and wrote something nice. Then someone at Netflix saw it and thought it was pretty cool.

The series will likely have several directors, but Liu will direct at least one episode and help produce it. For now though, he enjoys being part of the writers' room. "This is a pretty big shot I'm getting here," Liu says, "so I hope it works!"

"If it weren't for my Taft friends andfaculty who were in my first movies, I'd never be where I am today. I can't believe how lucky I am. It's kinda nuts," Liu says. "But I also want to use this project to say something important."

View the short written and directed by Dennis Liu, read the comic book, or follow the series' progress at www.dennis-liu.com.