Menu
No post to display.
Fashion into the Future 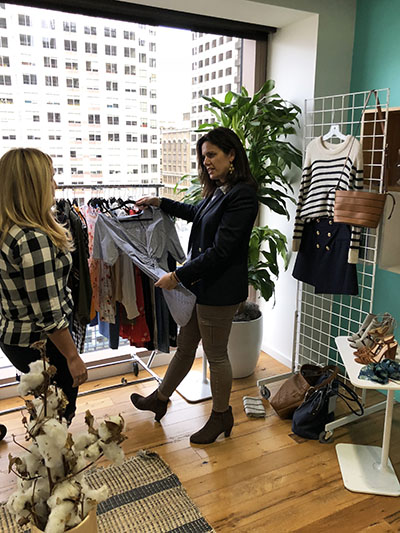 Vanessa LeFebvre Robinson '95 grew up working in her mother's clothing store in Litchfield, Connecticut, but when she started college at UPenn, she planned to follow a pre-med track. Fast-forward nearly two decades, and Robinson is leading the women's merchandising team at Stitch Fix, one of the most successful and exciting fashion/technology companies in the world.

Robinson's choice to embark on a retail career wasn't planned. After working three jobs at once during her college years, she decided to take some time off from the grind—a respite that would not have been possible if she'd applied to medical schools. A year off, she told herself, would give her some time to decide her next steps.

Robinson ended up in retail—something she thought she'd enjoy for a year and would allow her to earn money. She never expected she would stay in the industry, let alone end up in a major role at such a high-profile fashion innovator.

After UPenn, Robinson worked as an assistant buyer at Lord & Taylor, which she chose because "it was one of the few companies that still had buying and planning together, so it would allow me to work with the math and numbers behind retail and not just the pretty products," she says.

"Trends are always changing, customer behavior is always changing, the economy is always changing, and retail is really the intersection between all of those different factors, and that's the part that I really enjoy," Robinson says. "I love the idea that no matter how good your business is, it could change at a moment's notice, and you really need to always have your eyes and ears open to what that change is."

Robinson's openness to change prompted her to take a job at TJX, which owns TJ Maxx and Marshalls, after 11 years at Lord & Taylor. After two years there, she moved to Daffy's and then Macy's before joining Stitch Fix last May.

Like TJX, Stitch Fix is "a disruptor in the retail industry," says Robinson, who adds that "it's really important as a retailer to make sure you're always abreast of changing consumer behavior and evolving in your way of thinking about the customer."

Stitch Fix does that by using artificial intelligence and data science to recommend clothes to its clientele of men, women, and children. When new customers sign up online for the service, they're prompted to fill out a "Style Quiz" with fit and price preferences. After that an AI-powered computer suggests five pieces to a stylist, who then confirms the choices and processes the shipment. Items start at $28 and go up to around $600, with designer brands like Rag & Bone at the top. A typical men's box might contain two button-down shirts and a pair each of pants, shoes, and socks. Whatever the client doesn't want, they simply return in a postage-paid bag.

The San Francisco-based, publicly traded company has revenues of more than $1 billion and employs about 5,800 people. Robinson believes it's the future, and judging by its inclusion on LinkedIn's list of the top start-ups, others seem to agree. "People are expecting personalization," she says. "You take for granted that when you open Instagram or Facebook or even Google, it's customized for you. Stitch Fix is taking that to the next step and personalizing the shopping experience for you."

And while Robinson didn't end up with a medical degree, she says her background in science has been immensely helpful in relating to the way Stitch Fix's data scientists approach their role. "I guess all things happen for a reason," she says.