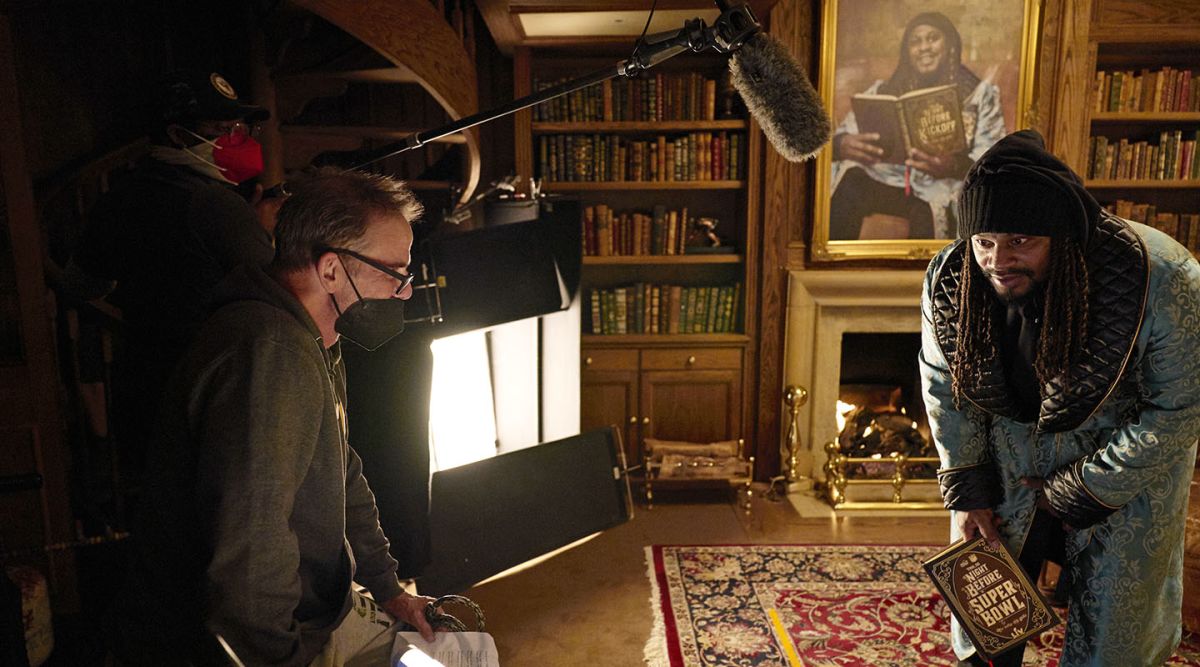 Filmmaking during a year of COVID-19

Few people are less inclined to reach for the pause button than Peter Berg '80.

Even as the global pandemic preempted the regularly scheduled programming of Hollywood, shuttering theaters, delaying premieres, and canceling awards shows, the acclaimed director dove into an array of movie projects, documentaries, and commercial productions with the same bullish energy that has become his calling card.

He directed Super Bowl ads, wrapped up an Amazon documentary on Rihanna, and even wrote a screenplay for Netflix, all while much of the world was coping with isolation from loved ones, friends, and colleagues.

"I certainly have not felt idle or bored in the past year," Berg says.

That's not to say that there haven't been appreciable concessions to COVID- 19, public health, and science, from strict testing protocols, to sequestering those on sets in bubbles, to moving preproduction meetings online.

"I, obviously, respect the seriousness of this virus," Berg says. "I do believe that that doesn't mean a complete shutdown."

Not a single cast or crew member involved in the spots that he directed for the Super Bowl tested positive for the coronavirus, according to Berg, who orchestrated one of the game's most talked-about commercials for Frito-Lay. The nearly two-minute ad, 'Twas the Night Before Super Bowl, was narrated by Marshawn Lynch and featured the Mannings (Peyton, Eli, and Archie), Joe Montana, Jerry Rice, Troy Aikman, Jerome Bettis, Terry Bradshaw, and Deion Sanders. The fun is amped up with the NFL stars dressed in patterned flannel pajamas during a rowdy snack fest. It took three days to film.

It was not the first time that the football-obsessed Berg, who directed the movie Friday Night Lights and developed its television series spin-off, collaborated with NFL stars. He previously directed the NFL 100 commercial in 2019 for football's centennial.

"Obviously, I love the NFL and getting to spend time with these legends," Berg says.

But Berg can tell you that some of the most compelling narratives intertwining sports and the human condition don't just play out in NFL stadiums in front of tens of millions of spectators watching on television and in the stands.

After George Floyd was killed while in police custody last year, Berg was drawn to Minneapolis North, a public high school where many of the students are Black. The football team there is coached by police officers, a number of whom worked with Derek Chauvin, the former officer who placed his knee on Floyd's neck for more than nine minutes and was convicted of murder.

Berg planned to follow the team's next season at the outset of Chauvin's murder trial. He is also working on a separate documentary project that will focus on police reform and civil rights.

"I felt compelled to try and create something that felt like a response to what I was feeling," says Berg, who graduated from Macalester College in Minnesota. "I felt like I wanted to explore contempt, policing in America, the issues facing police officers, and look at some of these systemic issues facing people and dealing with cops in America."

Telling difficult stories has become a hallmark of Berg's multifaceted career, which has spanned more than three decades as an actor and director.

Early in the pandemic, Berg began reassessing which projects he wanted to pursue, devoting three hours a day to writing a screenplay for Netflix called The Colonel's Wife. It was an exercise in discipline for Berg, who has gained a reputation as a self-starter and intense motivator.

"It provided me the opportunity to sort of take a moment and think about what I truly wanted to do creatively, and that was to write a script," Berg says.

The plot follows the ordeal of U.S. Army Col. James C. Hiett, who once oversaw the government's anti-drug program in Colombia, and his wife, Laurie Anne Hiett, who became a drug smuggler and laundered the profits from her illegal scheme.

"He didn't realize it, but his wife had a cocaine problem," Berg says. "While he was fighting the war on drugs, she started smuggling drugs back into the U.S."

The couple's tribulations were the subject of a 60 Minutes report. The colonel was sentenced to five months in prison and fired by the Army for failing to report that his wife was smuggling heroin through diplomatic mail. She received a five-year sentence. "They've had their lives wiped out, but they still love each other," Berg says.

Berg's ability to weave narratives is not lost on the leading brands or streaming services, especially during the pandemic. The companies that have enlisted him to direct commercials have included Ford, Verizon, Walmart, and Amazon, for which he created 20 spots.

"There was an immediate need for companies to try to communicate with the world during the pandemic," he says.

As Berg just wrapped up a documentary project for Amazon on Rihanna in late winter, he was set to begin work on a documentary series about the rise and fall of Victoria's Secret that was picked up by Hulu.

"We were starting to see this distribution before COVID," Berg says of streaming services. "As these platforms got more prominent, as people started realizing, 'Wow, I can watch this where I want and when I want—I don't have to go to a movie theater,' that was sort of turbocharged."

Berg has also been directing a series for Discovery Golf featuring Tiger Woods, who spent each episode playing a round of golf with celebrities. Berg was with the golf legend the day before he was injured in a car accident.

"Rough day," says Berg, who posted a photo of himself and Woods on Instagram, declaring that the golfer would overcome his injuries.

As the pandemic approached the one-year mark, Berg was admittedly restless—and hardly alone in that sentiment. Hollywood, he says, functions better when it's together.

"I almost would rather talk on the phone now than Zoom," he says. "I think we're all definitely missing in my business the contact that you normally get, particularly in the prep stage of a project."

So does he envision moviegoers filing into theaters any time soon?

"I think people are probably sick of watching movies in their house," Berg says. "I know I miss the movie theaters. How much it comes back is hard to say. I don't think movie theaters are dead. They will always be here."