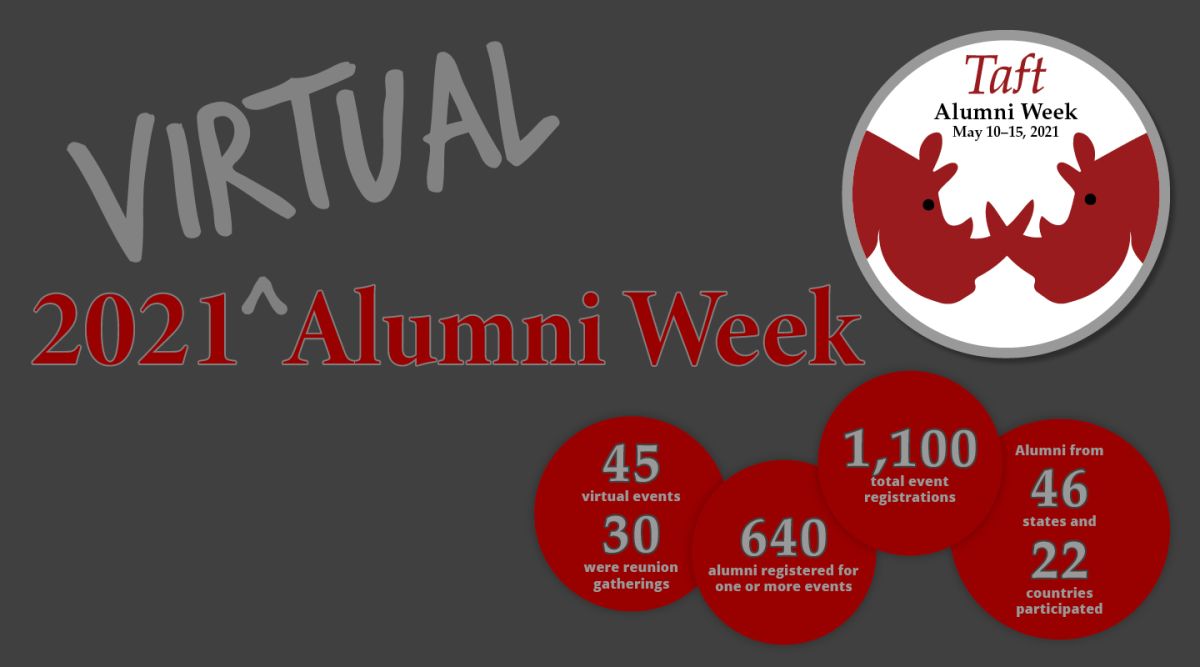 Yes, it could be done! Alumni reconnected for virtual class reunions that were still fun and deeply moving. Some shared that even while apart, they still felt closer than ever in this unusual year. Hundreds joined in for a week of live events, on-demand videos, alumni discussions, and programs with faculty and the head of school. The virtual get-togethers made it easy for alumni to join in from all over the world.

To view recorded videos of some events during Virtual Reunion Week visit www.taftschool.org/alumni/reunions/rhino-recordings 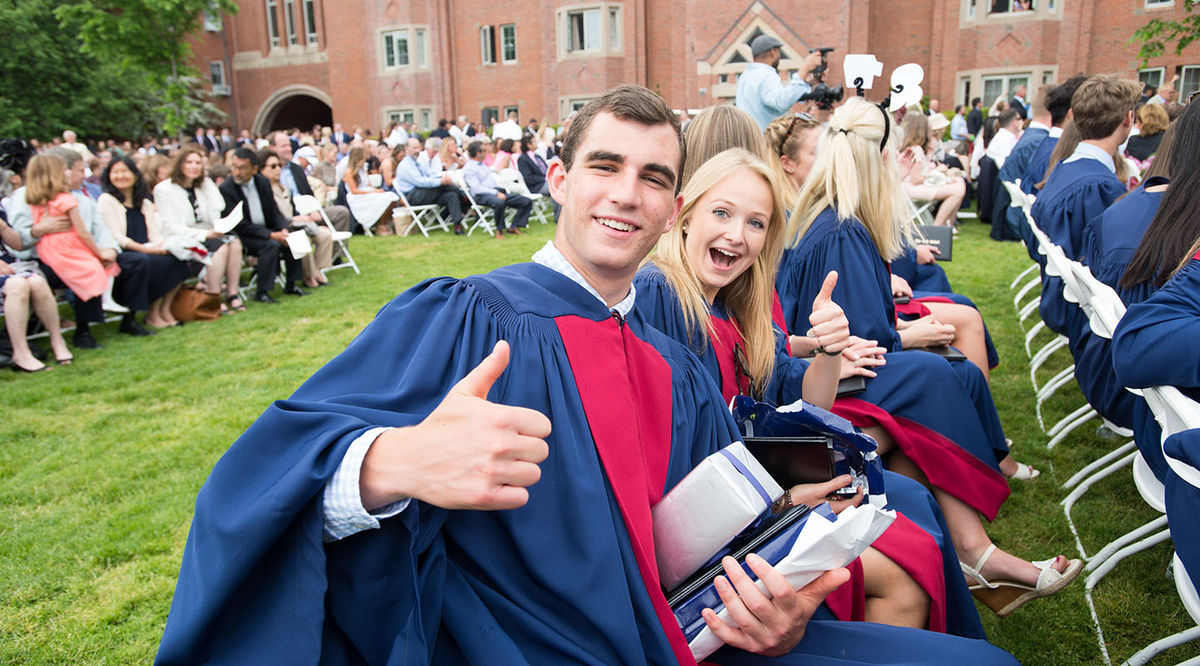 View all photos from Commencement 2017 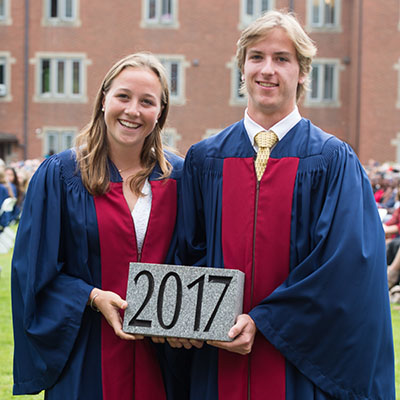 Mr. MacMullen, faculty and staff, family and friends, and above all, members of the graduating Class of 2017: greetings and congratulations! I am very happy to be part of this Commencement and want to thank you all for having me. Even though we live in North Carolina, 597 miles from the Taft campus, we have been—and been treated as—members of the Taft family for the past four years. Through our own daughter and other friends here, we've gotten to see how this school takes promising kids and turns them into young women and men who fulfill their promise....

I want to tell you a little bit about a boy who went to Taft over 90 years ago. Some of you may know his story, but I suspect that most of you don't. It's one worth hearing, and if you want to learn more about him you can read the Taft Bulletin from Summer 1998....

As a young man after Taft and college, Varian Fry '26 had had a fairly undistinguished career as a journalist, but, more importantly, he had a great moral compass. As a journalist, he traveled to Germany in the mid-1930s and he did not like what he saw. Then, in August 1940, about 14 years after he left Taft, he was offered a job with the Emergency Rescue Committee....

He was dispatched to Marseille in the south of France. This was just three months after the Nazis had defeated France at the beginning of the Second World War. The Germans occupied Paris and the northern part of France while the southern part was ruled by a puppet government in the town of Vichy. This was well before the U.S. entered the war and this country was still technically neutral. 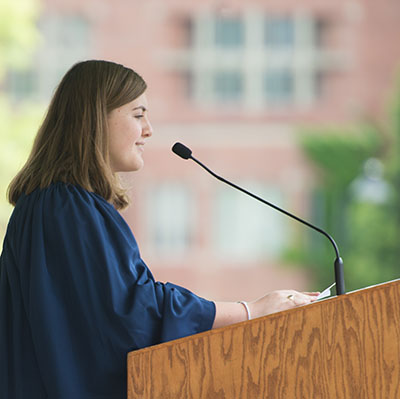 Marseille is a tough seaport city in the best of times, and in the summer of 1940 it was packed with refugees from all over Europe. And they were all desperately looking for a way out. The refugees were all seeking to go west—going east meant imprisonment and quite possibly death. And Fry...showed up in Marseille with nothing but a typewriter and a suitcase with $3,000 cash, and the job of trying to get out as many refugees as he could.

In those dark days, the most valued document was something called an "exit and transit visa" that would get a refugee out of France and through Spain, on to Portugal, which was a neutral country. From there, a traveler could get to Cuba or South America, or occasionally, the United States. If you're at all familiar with the plot of the movie Casablanca, these visas were the documents for which refugees would beg, steal, and even kill, as in that film.

Fry was operating in a foreign country and right under the nose of the Nazi secret police, the Gestapo. Under the law in Vichy, France, refugees were required to surrender on demand to the Gestapo for deportation to the east.

Upon arrival in Marseille, Fry got right to work. He found people who could forge travel documents or bribe Vichy officials to look the other way. He chartered leaky boats that could slip out of the harbor on dark nights. He located places to hide refugees while they waited for their papers to come through. In his work, he was aided by a U.S. State Department official named Hiram Bingham, whose father was a U.S. senator from Connecticut. And Hiram was more than happy—against direct orders from Washington, by the way—to issue as many visas as he could, even ones with fake names. 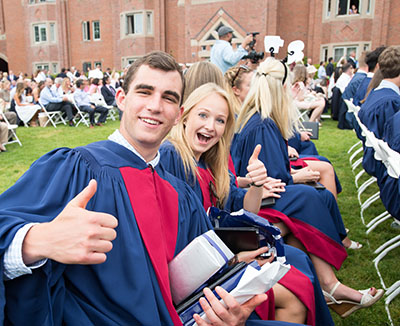 It's reasonable to think that the things Fry learned here were the same qualities that made him successful in Marseille. What kind of person can just show up in a place where he knows absolutely no one and immediately get the lay of the land and begin to act effectively? Maybe someone who's done that same thing when she's come to a school like this.

Fry had learned how to work with others—not just as an individual—toward a greater shared goal, which is something else you all have learned here.

Fry, when you think about it, was someone who had learned to engage with the world, not just a campus in Connecticut, or New York, or even Paris. He was willing to go to...one of the toughest places on earth, because that's where he could best be of use.

Maybe, like a lot of you, Fry also learned to inculcate that particular prep school relationship with authority that can best be described as "negotiable." He knew when it was time to obey authority, but also knew when and how to circumnavigate it. He also had a knack for knowing when to safely ignore authority. And—not lightly—he knew when to defy authority....

His bravery was impressive, but, as Mr. Mac puts it, there's always the important question of whether you are effective. And was Fry ever effective! In 13 months in Marseille, with the Gestapo and Vichy authorities breathing down his neck and with Fry breaking the law every day, he was credited with saving over 2,200 refugees from what would almost always have been certain death.

Among those were the artist Marc Chagall, who later designed the famous Peace Window at the United Nations in New York. He also helped save Hannah Arendt, who became the world's foremost philosopher on the subject of totalitarianism. And Claude Levi-Strauss, acknowledged as one of the 20th century's greatest anthropologists. All of these were people whose nationalities or politics or heritages had them on the run....

In 1994, 28 years after his death, Fry became the first American citizen to be honored among the Righteous of Nations at Yad Vashem, the Israeli Holocaust memorial. This honor is given only to those who voluntarily risked their own lives to help the victims of the Holocaust. Only four other Americans have been so honored.

Varian Fry's heritage is now your heritage as Taft graduates. The 21st century—as we've all learned—is going to provide you with no shortage of opportunities to be brave, to stand up to bullies, to negotiate with and occasionally defy authority, and to help those in extreme circumstances. In short, opportunities to put into practice the things you've learned here.

Pressley Millen P'17 is a senior fellow at the Duke School of Law and has led a distinguished life as a lawyer, educator, and public servant.