Menu
No post to display.
A Nose for the Business 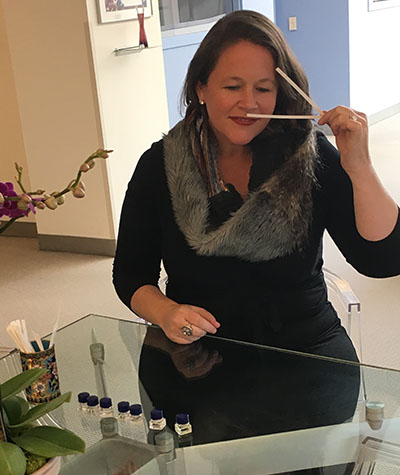 Spiced apple toddy. Iced blackberries. Sugared amber. Cappuccino truffle. When you get to work each day creating scents like these, life is pretty sweet.

As a perfumer for the leading privately owned fragrance company in the world, Ashley Wilberding Balavoine ’90 gets to create the scents that, whether we realize it or not, are in products that most of us use every day: shampoos, soaps, candles, and fragrances. “Every day I get to travel with my nose,” effuses Balavoine.

Balavoine works for Firmenich, a 120-year-old Geneva-based company with 6,500 employees scattered among 63 facilities around the world. Firmenich develops flavors and fragrances for everything from foods and beverages to soaps, candles, and perfumes for multinational companies. Some of Balavoine’s clients include Mary Kay, Henri Bendel, Ralph Lauren, L’Oréal, and Crabtree & Evelyn. For a current project for Bath & Body Works, for example, Balavoine is developing a fall scent, choosing just what formula of florals, citrus, greens, and fruits will make the best fragrance for their product line.

“There are a lot of similarities with music,” explains Balavoine of the process. “You need to know how to make a chord, with top, middle, and base notes. We use a mass spectrometer during the process.” An artful operation that clearly has its scientific component, the job of perfumer requires not only a refined nose, but also years of training, including learning and being able to identify over 1,000 raw materials.

Balavoine must also keep abreast of the trends in fragrance, which she points out are very connected to each culture, and vary by country. “Now woody scents are very prevalent—heavy, dark notes—as people are tired of concrete and want to escape into the woods,” she says, noting a proclivity of Americans to find comfort in their fragrances (think vanilla and butterscotch).

Of the five senses, smell is a person’s strongest link to memories. Balavoine has been using her own nose as a grounding force as long as she can remember. “I would put everything to my nose. When I was four I started making potpourri from my garden. I’d also never eat anything until I smelled it first!” she recalls.

With a father whose international job took the family overseas, Balavoine lived abroad for the majority of her childhood, calling Japan, London, and Saudi Arabia home, a lifestyle that regularly immersed her in a rich and exotic palette of smells. “I discovered countries through my nose. You could call me an olfactive anthropologist,” she remarks. 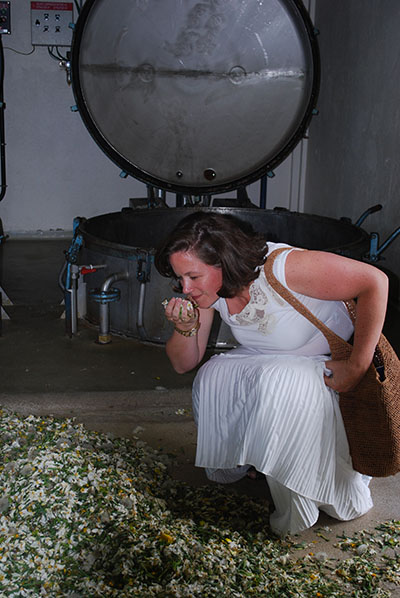 It was not until she traveled to the International Museum of Perfume in Grasse, France, during college that Balavoine realized she could turn her olfactory prowess and passion into a career. After a few detours, including a job with Merrill Lynch and six months in Sweden playing professional women’s ice hockey (with a potential opportunity to try out for the U.S. women’s Olympic team), she began her career as an apprentice perfumer in 1996 for V. Mane Fils in Le Bar-sur-Loup, France.

Since then, her nose has taken her to Beijing, where she opened new offices for V. Mane Fils, and to their Mexico City office, returning to the United States in 2005. Seeking a bigger opportunity, Balavoine seized the chance to work for Firmenich, at the top of the industry. As one of 11 perfumers in Firmenich’s New Jersey office, Balavoine spends her days developing scents for predominantly body and home care.

While she says she is lucky to merge her passion with her profession, Balavoine notes that her job is not without its challenges, and that the creation of a scent is not a simple endeavor. “Development can take anywhere from weeks to years. Making a fragrance for Procter & Gamble, for example, can take up to eight years,” she explains. “You have to be really resilient. We have a whole team that critiques the fragrance…and then, of course, there’s the customer.”

Yet, she stresses, the job perks don’t exactly stink: “I get to do coffee with cardamom next week!”